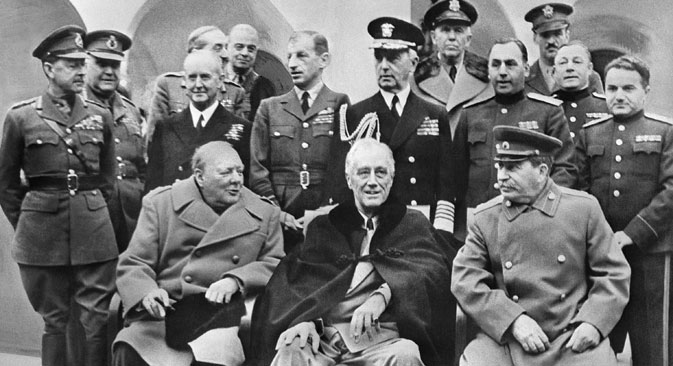 History soon revealed the re-establishment of diplomatic relations as a win-win situation for both countries. Franklin D. Roosevelt and Joseph Stalin at the Yalta conference in 1945. Source: ITAR-TASS

Eighty years ago, the United States and the Soviet Union re-established diplomatic relations in a way that helped to assure victory in 1945.

Eighty years ago the United States and the Soviet Union established diplomatic relations. This sounds odd, because in 2009 the two countries celebrated the bicentennial of their relationship, with some fanfare, so this year we should be witnessing the 204th year of bilateral diplomacy.

But there was an unfortunate gap in this history. How did it happen?

Washington was wary of the new entity following the revolution of October 1917, and refused to recognize it. Both future World War II allies coexisted without ambassadors and embassies and were intensely hostile toward each other. This situation lasted 16 years, until the heat from the ominous flames over the Reichstag in Berlin could be felt both in the White House and the Kremlin.

Back in the USSR: A private collection of Lend-Lease relics

The Soviet voice that infuriated Hitler

With the international situation rapidly changing, both sides viewed each other in a new light. Washington realized that the Soviet Union was growing stronger economically as well as militarily and might be a potential ally in case of threat to American interests in Europe and Asia.

American businesses suffering from the Great Depression were eager to engage in export opportunities with the Soviet Union, and the Soviets were quite eager to buy new technology to modernize its industry in return.

Well-known for his vision and foresight, President Franklin D. Roosevelt sent a letter to the Soviet Head of State Mikhail Kalinin with a proposal to begin negotiations toward the establishment of diplomatic relations. Kalinin sent the Soviet Foreign Minister, Commissar on Foreign Relations Maxim Litvinov, to the White House. Litvinov spent 10 days in Washington, D.C. He met almost daily with Roosevelt, often one-on one, discussing conditions for establishing diplomatic relations.

On November 16, 1933, Litvinov received the following letter from President Roosevelt:

My dear Mr. Litvinov: I am very happy to inform you that as a result of our conversations the Government of the United States has decided to establish normal diplomatic relations with the Government of the Union of Soviet Socialist Republics and to exchange ambassadors. I trust that the relations now established between our peoples may forever remain normal and friendly, and that our Nations henceforth may cooperate for their mutual benefit and for the preservation of the peace of the world.

I am, my dear Mr. Litvinov,

The first Soviet Ambassador to the U.S., Alexander Troyanovskiy, arrived to Washington on January 1934. Two months later U.S. Ambassador William C. Bullitt landed in Moscow. The weeks and months after were considered the “honeymoon” period. Extravagant celebratory parties took place in both capitals.

The gala in the U.S. Ambassador’s residence, “Spaso House,” was immortalized in the famous novel by Mikhail Bulgakov, “The Master and Margarita.”

History soon revealed the re-establishment of diplomatic relations as a win-win situation for both countries. Just five years after the exchange of the first Ambassadors, the conflagration of Word War II in Europe began. Two years later, Nazi Germany attacked the Soviet Union.

It is hard to imagine the glorious Elba River meeting at the end of the war without the foundation created during the previous 12 years of elaborate diplomatic relations.

The growth in diplomatic relations also opened the doors to cultural exchange. To this I would like to add a happy local note: Marjorie Merriweather Post, wife of the second U.S. Ambassador, Joseph E. Davies, was able to create Washington’s Hillwood Estate, Museum and Gardens, whose extensive collection of Russian art would never have been possible without this breakthrough in 1933.

Alexander Potemkin is the executive director of the American-Russian Cultural Cooperation Foundation in Washington, D.C., and was cultural attaché both to the Soviet Union and the Russian Federation.