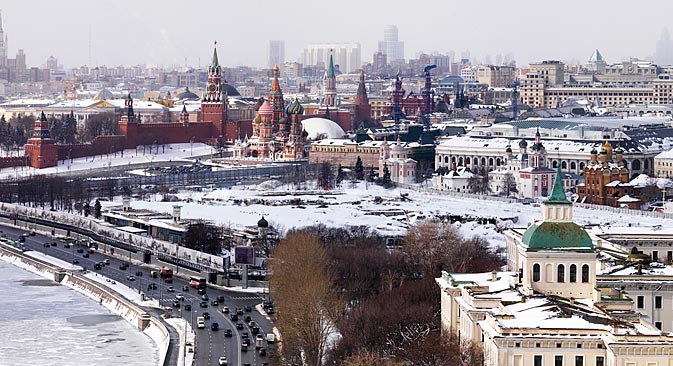 The Rossiya hotel was demolished in 2007, and since then the space has been Moscow’s most expensive vacant lot. Source: Press Photo

Diller Scofidio + Renfro, known for their design for the High Line park in New York City, will design a new park by the Kremlin.

Last week, officials in Moscow announced the results of a competition for the best landscape concept a new park to be built on the site of the demolished Rossiya Hotel, steps away from the Kremlin. The winner was an international group of companies headed by the New York architecture firm Diller Scofidio + Renfro, which designed the celebrated High Line.

DS+R architect and Project Manager Zoe Small told RBTH via email that the main idea of the winning concept for the park, known as Zaryadye after the historic name of the site, is a wild urbanism: “a hybrid landscape where the natural and the built cohabit to create a new type of public space. The Park incorporates four Russian landscape typologies: tundra, steppe, forest and wetland.

These zones are organized in terraces that descend from northeast to southwest, with each layering over the next to create a set of programmed spaces integrated into the landscape: nature and architecture act as one. Using a unique paver system that seamlessly knits landscape with walking surfaces, the Park is pathless and people are free to move about in entirely unscripted ways.”

In Zaryadye, the landscape will alternate between expressions of climate zones typical of Russia, including the tundra, the steppe, forests, swamps and an ice cave. Special technology installed in different parts of the park will create the artificial microclimates.

The park will also include a glass amphitheater where the temperature can be controlled by designated heating and cooling systems, allowing it to be used year-round. 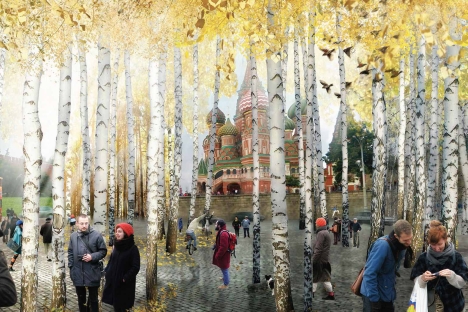 In Zaryadye, the landscape will alternate between expressions of climate zones typical of Russia. Source: Press Photo

Denis Leontiev, the C.E.O. of the Strelka KB (part of Strelka Institute for Media, Architecture and Design), which developed the technical assignment and functional model of the park said of the winning concept: “Only strong projects made it to the final. But Diller Scofidio + Renfro offered the park of 21 century, answering to needs of the modern megalopolis. They offered a project that will give Moscow visibility at the international level.”

Beyond the tip of the iceberg: Moscow architecture revealed

Competition participants were told to consider a budget of between $171 and $230 million for the realization of the design. Deputy mayor Marat Khusnullin has designated between 5 and 6.5 billion rubles ($150–200 million) for the construction, but stressed that this was a preliminary sum; chief city architect Sergei Kuznetsov had said previously that the park would cost nearly twice that amount. According to Khusnullin, the project will be paid for solely with government funding without seeking outside investors. “They would demand that there be commercial areas,” Khusnullin said.

At the same time, Khusnullin said that the park must cover part of the costs of operation and suggested that a model in which individuals or companies could adopt a tree or other natural feature could be used, like the system at the Moscow Zoo that allows patrons to sponsor an animal.

Despite the attention paid to Diller Scofidio + Renfro’s victory, the realized park may differ substantially from the concept. Another competition will be held to select the chief designer of the park, who will work according to a technical assignment developed by city planners.

Kuznetsov, who will head the committee to select the designer said: “The chief designer of the park will be chosen in a competition that will be announced soon, and it will likely be a Russian company. “We do not have any law that says that the team that wins the concept competition must be the chief designer, but Diller Scofidio + Renfro will of course participate in the realization of the project.”

Kuznetsov said that two elements of the design will remain unchanged, however – the observation area on the Moscow River embankment and a partial closing of the Moskvoretsky Bridge over the river for pedestrians. 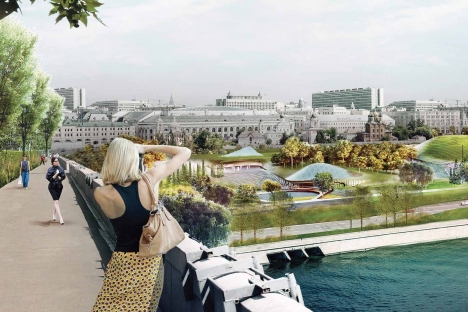 Despite the attention paid to Diller Scofidio + Renfro’s victory, the realized park may differ substantially from the concept. Source: Press Photo

The competition to create a concept for the Zaryadye park which was announced by the Moscow City Architecture Committee in April 2013, attracted 87 applications from 450 companies in 27 countries. Work is scheduled to begin next year start and should be completed by 2018.

The Zaryadye area is as old as Moscow itself. It began as a trading area along the riverbank but became an elite residential area during the Middle Ages. Later is became Jewish ghetto. In the 20th century, there were plans to erect one of Stalin’s skyscrapers there, but the project was still in the planning stages at the time of Stalin’s death and it was later deemed an “architectural extravagance.”

In the mid-1960s, the Hotel Rossiya was built in Zaryadye. At the time, it was the largest hotel in the world. The Rossiya was demolished in 2007, and since then the space has been Moscow’s most expensive vacant lot. In 2012, the decision was made to use the space for a park.