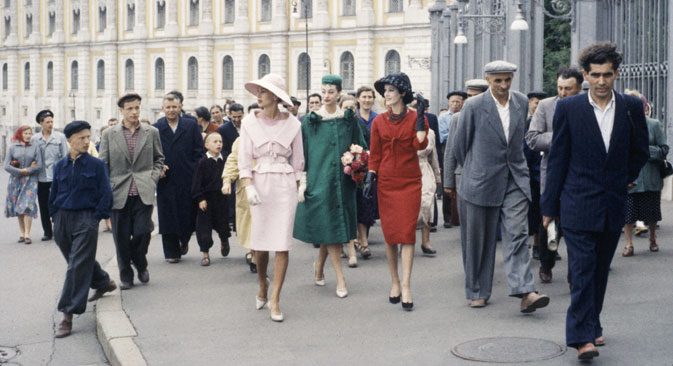 With the “thaw" in political relations with the West, social life in the Soviet Union also began to transform. Shops began to stock some imported goods and Soviet women got access to foreign fashion magazines with sewing patterns.

Dior model in GUM in Moscow, in June of 1959. Source: Getty Images / Fotobank

In 1959, when a Christian Dior collection was shown in the Soviet Union for the first time, media from all over the world carried pictures of elegant French models in Moscow's main department store, GUM, surrounded by locals. The elegant models looked particularly out of place among the Russian women in their simple dresses and headscarves.

At the time, the Soviet Union was firmly behind the Iron Curtain and satisfied all its needs with domestic production alone. Foreign fashions were not allowed into the country under the principle that caring about one's looks was capitalist.

Russian women dressed in simple dresses, headscarves tied under the chin, and woolen or cotton stockings made without spandex, which therefore tended to gather in folds at the knees and ankles. They wore sandals with cotton socks. Men, especially middle-aged and over, wore gray and dark-brown suits.

As to every rule, there were exceptions. My grandmother, for example, who was slightly over 40 at the time, made herself elegant dresses in bright colors based on designs from fashion magazines.

Getting fabrics for those was always a challenge and when she succeeded (almost always thanks to knowing the right people), she was extra careful not waste a single inch.

She once had a private seamstress make a pillbox hat with a matching fur scarf. It is a shame that they have since been lost as they would be quite in line with current fashion trends.

But as political relations with the West began to thaw in the early 1960s, social life in the Soviet Union also began to transform. Shops began to stock some imported goods and Soviet women got access to foreign fashion magazines with sewing patterns.

Of course, the bulk of women's wardrobes still consisted of mass-produced items. A popular joke at the time went as follows: "The Soviet Union does not have fashion – it has light industry instead."

Indeed, all the clothes that reached the shops were designed in state-run fashion houses, vetted as to their conformity with Communist ideals and then manufactured in large quantities by factories all over the country.

To give credit where it is due though, it should be said that many of those items were of excellent quality: they lasted for years and were often passed down to younger generations.

However, in the end there was only a very limited range of things available in the shops: a couple of styles of summer dresses, a couple of winter ones, a pair of mittens and a pair of boots.

Some of the small joys available to Soviet women were leather accessories, knitwear and cosmetics imported from Socialist countries. The ultimate bliss came in the form of a rare Italian or French item, which cost a fortune and were obtained only through personal contacts, like in a spy movie.

Black marketeers used a variety of ways to get coveted clothes from foreigners visiting the country: some exchanged them for Soviet souvenirs or tickets to the theater, others received them as a “token of eternal friendship" after drinking Armenian cognac together.

In the end, the desire to look attractive turned out to be more powerful than shortages or fear of fines.

Soviet women also got ideas about fashion from the media, since increasingly more foreign films and news from abroad were shown on TV. In addition, Soviet athletes and filmmakers were allowed to travel abroad and they began bringing back clothes for their families and friends. Young people began to wear fashionable trench coats and loose jackets in brushed wool.

Actors in Soviet films of the 1960s were dressed in line with the latest trends in fashion to show to the rest of the world that people in our country knew how to dress well. Films themselves became more liberal.

They featured actresses who had their hair loose, a la Brigitte Bardot, and wore sleeveless dresses. A young woman who cared about her looks and followed the fashions was no longer vilified.

The leading star of the time was the beautiful Tatiana Doronina, with her trademark Babette hairstyle, a type of large, loose bun. Inspired by film stars, many Soviet women began to wear trapezoid dresses and back-seam stockings, apply eye make-up and do their hair differently.

Only children's fashions were lagging behind. They were truly missing from the fashion scene. Parents could dress their children in decent clothes only if they could sew themselves or had access to imported goods.

The usual clothes for a small boy attending kindergarten consisted of cotton stockings attached with special clips to shorts and a cotton shirt.

Many Russians today feel nostalgic for the 1960s and some fashion trends of that era are back in style. Shorts worn over tights have become a fashion standard all over the world, and Russian fashionistas have a real fetish for the dresses their grandmothers wore during that time.