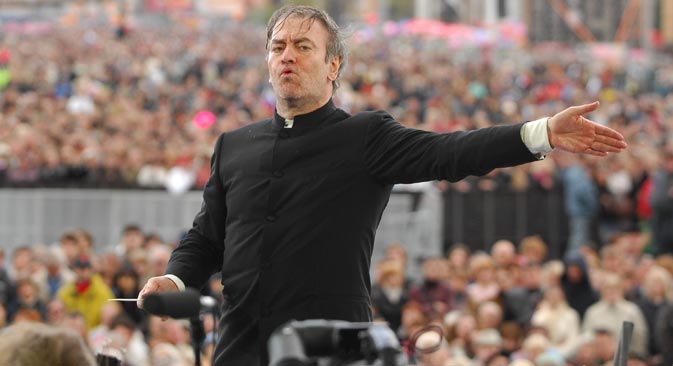 The Russian Ministry of Culture has announced a competition to organize the opening and closing ceremonies of the Sochi Olympic and Paralympic Games, but names of scheduled participants have already leaked out.

Although the ministry said it will announce the winners of a competition only  on Dec. 13, the roster for all ceremonies was set long ago: those masters among the invitees know their schedule many seasons in advance. No surprises are allowed here.

Major Russian stars will perform at four of the Sochi Winter Olympic Games’ events, including violist Yuri Bashmet and director Valery Gergiev. Prior to the Games, both maestros will meet up during the Winter International Arts Festival, which Bashmet hosts in Sochi.

The festival will open prior to and feature in the Games’ culture program. The Games will also see a performance from the first All-Russia Junior Orchestra headed by Bashmet.

About 1,069 participants, including four directors, three soloist-vocalists, six ballet artists, one pianist, one violinist, an orchestra, and a choir will participate in opening ceremony.

It was reported earlier that the British authors of the “Isles of Wonder” show from the London Olympics opening are helping to create the Sochi program.

The prominent pianist Denis Matsuev has announced his active participation in the cultural program of the Olympics.

“To be sure, I am participating in the Olympics, but how – I will not disclose secrets. Naturally, I will play the piano and root for our athletes,”he said.

Edgard Zapashny, the director of the Moscow State Big Circus on Prospekt Vernadskogo, said that solely Russian circus artists will participate in the ceremonies.

“I’m tremendously glad about this. I was displeased that Cirque du Soleil worked at the University Olympics in Kazan. When Russians do something, it should be through Russian efforts. In many things, especially circus and ballet, we can dictate who is the strongest on this planet,” Zapashny said.

Izvestia reported that Ulyana Lopatkina, the prima ballerina of the Mariinsky Theater, will be among the ballet artists representing Russia. Lopatkina performed also at the Vancouver Olympics.

Natalia Neumann, the general manager for opera prima donna Maria Guleghina, also lamented the impossibility of “disclosing information.” Yet she confirmed that Maria Guleghina will definitely attend the opening of the Paralympic games, as she is an honorary member of the International Paralympic Committee.

The Ministry of Culture has earmarked 40.5 million rubles ($1.2 million) for all four ceremonies, exclusive of fees, since actors of the high arts have high demands. The opening ceremony of the XXII Winter Olympic Games in Sochi will be held at Fisht Olympic Stadium on Feb. 7, 2014.

Plans call for a performance on three stages with heroes of Russian tales, the Russian troika from Gogol’s “Dead Souls,” and Peter I commanding five ships. Imperial Russia will give way to the 20th century with 15 buildings, six locomotives, six bridges and sculptures.

The ceremony will end with the lighting of the Olympic flame. The Games will close on Feb. 23. The opening and closing ceremonies of the 11th Paralympic Winter Games will take place from March 7 to 16, 2014.