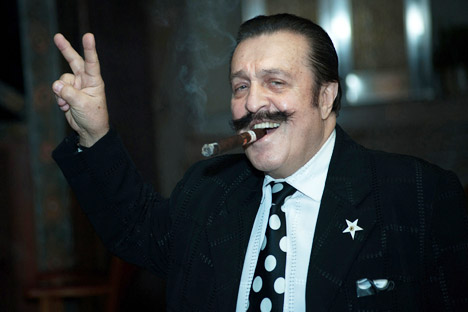 Russian prison songs, with their tales of prison life and search for expiation, constitutes one of Russia’s most distinctive music genres.

Radio Rossii, a Russian nationwide wire radio station, runs a program titled Kalina Krasnaya (Red Guelder Rose), which could hardly be imagined on the schedule of any other broadcast media in the country.

The presenter reads letters from prison convicts and each instalment is interspersed with songs whose lyrics may shock the unprepared listener. The main topics of these music compositions talk about prison life, repentance and love. All the tunes sound extremely alike. This is a special Russian music style, known as Russian chanson.

Prison music exists in most cultures - just think of American blues or hip hop. But Russian chanson stands aside as a unique genre. In Russia it is widely believed that the intelligent urban population listens almost exclusively to Western music, while the rest of the country goes for chanson.

This is only partly true. While the educated circles might express their contempt for prison-style music, certain chansons are known to virtually every Russian. Take the works of the late Mikhail Krug, or those of relatively new performers such as Stas Mikhaylov, Yelena Vaenga, and Grigory Leps (recently put on the U.S. Department of the Treasury blacklist on suspicion of mafia links).

These artists seem to have appeared out of nowhere; taking TV channels and radio stations by storm and filling stadiums across the land during their concerts in no time.

The founders of the genre are Mikhail Shufutinsky, Alexander Novikov, Villi Tokarev, Alexander Rosenbaum and Lyubov Uspenskaya. But all over Russia it’s easy to come across a constellation of lesser-known chanson singers and authors.

Kalina Krasnaya often airs their songs. The program's name alludes to the title of a movie by prominent Soviet film director Vasily Shukshin: the simple story of a jailed thief whose pen friendship with a rural woman grows into a full-blown relationship.

The man eventually gets released and goes to the countryside to settle down with his new love and start an honest life – only to be killed by his erstwhile criminal chums. The idea of the film is simple: crime is never forgiven, and atonement is unachievable.

The Russian chanson, however, projects a totally different message: it sings praise to apparently heroic people who have just run out of their luck.

There is a Russian proverb that says: no-one is immune to jail and poverty. No matter how rich and influential you are, you may still find yourself imprisoned or impoverished. Stalin’s purges and harsh criminal prosecution have made Russians sympathetic towards prison convicts. One can go as far as saying that Russian chanson as a phenomenon is more social than cultural.

Russian chanson borrows its name from the French chanson tradition, whose distinct melodic style was forged by the great Jacques Brel, Charles Aznavour and Salvatore Adamo. In the Soviet Union, however, popular songs about prison life have always been known as blatnaya pesnya (criminals' songs).

The term "Russian chanson" is believed to have been coined quite recently, in the late 1990s at the earliest. "Russian chanson is a notion introduced by marketing consultants, just like the term “world music” once was," says Artem Lipatov, who has been working as a pop music programs producer for over 20 years.

Most Russian chanson singers are far from having any direct links with the criminal world. Nowadays, most are professional musicians.

"The only member of the band with any prior prison experience would be me," said once singer-songwriter Mikhail Tanich, founder of the ultra-popular Russian chanson band Lesopoval. Tanich, who had fought in War World II and had been decorated for his valour, was sentenced for six years in prison in 1947, after someone grassed on him for saying in a private conversation that German radios and roads were better than those in the USSR. After his release Tanich became one of the most prominent and acclaimed Soviet singer-songwriters; yet, he didn’t tap into his prison experience until 1990, when Lesopoval got formed.

"Many started writing songs that mimicked that style," Lipatov says. “Radio Chanson - how else would you call such a radio station - was founded [Radio Chanson is a popular Russian radio station specialised in the broadcast of chanson style songs, note of the editor]. Many did very well under this new format, from Arkady Severny, who passed away in 1980, to some modern writers such as Mikhail Gulko and Shufutinsky. They were perceptive in identifying the interest of record collectors, and started catering for that market."

The story of émigré musician Mikhail Shufutinsky is quite different. Shufutinsky does not conceal that, while earning money playing in a Russian restaurant in the U.S., he started playing criminals' songs at his listeners' request: "Such songs used to be banned in the Soviet Union. But in America, former Soviet citizens wanted to listen to this kind of music. And I knew all these songs: my dad and his friends used to sing them back home. At the time I was too ignorant to understand what they were on about, but the sheer force of those songs had left an impression on me. They used to be my lullaby songs."

Shufutinsky is a professional musician; before emigrating he studied in a Soviet music school and went on to work successfully with a series of bands in his home country. After his arrival in America he started snatching any studio job that went his way, even scoring a gig playing keyboards for rap band Run DMC: "I have always been good at reading scores and playing from the sheet. This is why so many bands would call me as a replacement every now and then."

Lesopoval. A white Swan on a pond. Source: YouTube

The chansons by Shufutinsky, Uspenskaya and Tokarev - all émigré artists - were big among members of the Russian diaspora in America and, streamed from across the ocean, went on to become sensationally popular in the Soviet Union. Their albums would be secretly copied from cassette tape to cassette tape and shared through their informal network.

"Back in the Soviet Union my songs would be sung and played across the country," Tokarev recalls. "I got to play with the best bands and wouldn’t have asked for anything else. But back then there were certain things that you could not play. I arrived in the States with five dollars in my pockets and started learning English. My first job was as a taxi driver. I was trying to earn money for a studio of my own. It was with a group of American musicians that I recorded my first album, and within one month I got showered with cheques."

Tokarev’s style relies on zany verses with a cheerful and hearty flair - and he does look the part with his massive moustache - but his texts are pierced with nostalgia, pain and loneliness. They say nothing about prison life, but everything about lack of freedom and misfortune. And these are, after all, the main topics of any Russian chanson song.