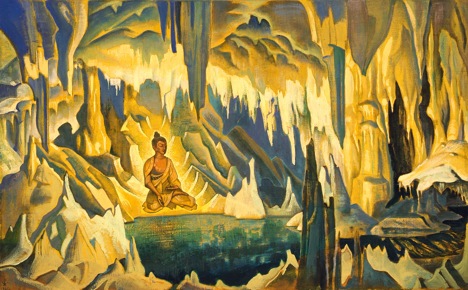 Roerich had a great understanding of Buddhism

The great Russian writer, artist and philosopher visited Ceylon in 1924 and spent a considerable amount of time in Colombo before exploring the ancient ruins of Anuradhapura.

Anton Chekov’s brief stay on the island known as ‘The Pearl of the Indian Ocean’ has been well documented. Two hotels in Colombo claim to have hosted the great Russian writer when he was on his way home from Sakhalin to Moscow. There was another great Russian writer, artist and philosopher who had a brief sojourn in Sri Lanka or Ceylon as it was then called: Nicholas Roerich.

In 1924, Roerich visited Ceylon while going on his famous Altai-Himalaya expedition. The artist, along with his sons and other members of the expedition, set sail for Colombo from Egypt. He was well-versed about the history and the legends of the island and its importance to both Buddhists and Hindus. The impact of British colonisation shocked the artist. In Altai-Himalaya: A Travel Diary, he writes, “Ancient Ceylon—the Lanka of the Ramayana. But where are the palaces and pagodas? It is strange.” He was surprised to see a port full of Europeans and not the Sinhalese that he had expected. “In Colombo we are met by the Swiss Consul. The policeman is Irish. A French peddler. A Greek with post-cards. Dutch tea-peddlers. An Italian chauffeur. But where are the Singhalese? Have they all emigrated to Europe?”

Colombo-based historian Manel Wickramatunga says the Russians of that time knew even less about contemporary Ceylon than they knew about India. “They must have had some idea of the existence of a modern city from the writings of Chekhov, but being staunch Indophiles, the island for them was some sort of a fairy tale,” she says. Roerich and his team stayed on the island for a few weeks, the historian says. “We know for sure that he travelled up-country and visited the ruins of Anuradhapura.”

Roerich spent a considerable amount of time in and around Colombo and tried to visit as many important Buddhist sites as possible.  The first important temple that he saw was the Kelaniya Raja Maha Vihara, where the Buddha is believed to have come in his third visit to the island. “The first aspects of Buddha and Maitreya reveal themselves in the Kelaniya Temple near Colombo,” Roerich wrote.  “The powerful images are guarded in the dusk of the temple. Hinayana prides itself before many-varied Mahayana on the refinement and purity of its philosophy. The great restored stupa near the temple reminds one of the ancient foundation of this place.”

For the Russian philosopher, Lanka would always be synonymous with the great Hindu epic, The Ramayana.  “But, after all, only in fragments do Colombo and Ceylon recall the ancient Lanka of Hanuman, Rama, Ravana and other giants,” he wrote.

Nicholas Roerich also visited the sleep and still beautiful town of Mount Lavinia, which is south of the Colombo fort. “The public baths near the bitter-sweet mountain, Lavinia, do not suggest the domain of ancient giants. Slender palms shame-facedly bend down to the spray of the tide.” The area is still known for its village-like atmosphere, leafy and hilly lanes and one of the cleanest city beaches anywhere in the world.

Throughout his writings, Roerich displayed both a love and a tremendous understanding of the Buddhist philosophy.  “Many temples and palaces guard the fragments of one of the best periods of the Teaching,” he wrote.

Roerich visited Anuradhapura, which was the capital of the Sinhalese kings from the 4th century BC to the 11th century AD. “Like skeletons stand the fragments of Anuradhapura; consider that Anuradhapura is not entirely explored,” he wrote. “And Adam’s Peak is not enticing. By the remains of Anuradhapura one may judge how powerful was Borobodur in Java.”  Wickramatunga says it is unclear if Roerich climbed up Adam’s Peak. “We can’t be sure why the reference to Adam’s Peak came up when he was writing about Anuradhapura, but he may have climbed the mountain, given his enthusiasm for the hills and his spiritual nature,” the historian added.

It was around the time that Roerich was in India and Sri Lanka that many ancient sites were being unearthed from the jungle. “Outside of the ruins which are known, numerous unsuspected treasures are buried under the roots of powerful jungles, Roerich wrote. “That which has remained above the soil gives an idea of the past splendor of the former mighty city. You do not need to search for the places. They proclaim themselves. But exploration can only give results if it is carried on in a broad measure. One must approach such ruins fully fortified, as one palace alone has 900 chambers.”

Some historians in Sri Lanka suggest that the British Colonial Administration tried to deny giving Roerich permission to enter India from Sri Lanka and it took the Russian artist’s influential friends to help secure the necessary permits.  After his brief sojourn in Ceylon, Roerich travelled by ship across the Palk Strait into India, from where his epic journey to the Himalayas and beyond began.