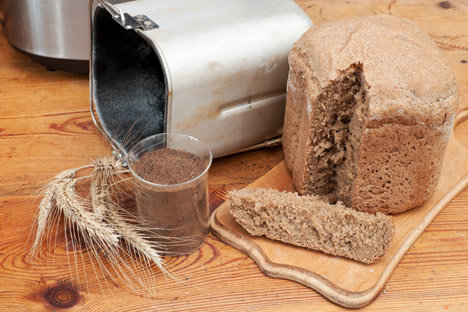 What can be more delicious than home-made bread? Source: Lori / Legion Media

Russians increasingly prefer bread baked with their own hands, saying they can produce better tasting loaves than what you can get in the stores.

Why has it become fashionable to bake bread at home in Moscow? For many consumers, the answer comes down to taste: store brought bread, in their eyes, had become tasteless and spoiled easily.

Julia, for example, has told her colleagues that it is best to bake bread with ones hands. Now they are all using electric bread makers and actively discussed about its advantages.

"At first I didn't want to buy it, but then I was convinced by my husband. And we really enjoyed our bake,” one Moscow fan of homebaked bread said. Homemade bread is not only far tastier, but it can be stored longer, she added.

"All week, the bread becomes softer and is not covered by mold in three days like the ones brought from the shop. Previously, children generally do not eat bread, but they do eat it now,” she says. “When our friends get together, the breads we eat are better than sweets.”

Julia says that bread baked at home is not more expensive than those found in local markets, but the cost will depend on the price of flour.

"Flour can cost 25 rubles ($0.8) per kilogram, or maybe 100 (over $3), but even from the cheap flour, bread is more delicious than the one taken immediately from shop shelves," she said.

Anna, who also lives in Moscow, said there are no common standards for bakeries; they can be judged only by the user.

"The bread is tasteless when we put in poor-quality flour, potato starch or stale yeast. For example, flour from grain that’s been poorly stored will be edible, but it will never be tasty. Now many bake bread their selves, because they want to understand what it actually is,” she said.

As an example, she offered to try bake bread and compare it with purchased in the nearest shop. In Moscow there are shops where you can buy not only the correct flour but also Baker's yeast and other bread baking ingrediants. There are even devices for the lazy that only need water added and then put in the oven. Typically, this set includes flour, yeast, cumin, coriander, and dried fruit.

"There are many little cafés and bakeries where you can buy good bread in Moscow. However, all of them are in the center of the city,” Svetlana said. “I try not to buy bread from an ordinary shop as it quickly becomes covered by molds. If the bread is that perishable, then probably this mold was already in the bread."

However, judging by the experiment conducted by the newspaper Moskovsky Komsomolets, bread bought in Moscow shops turns out to abide by all the standards.

Kurnik: The honored guest at every Russian wedding

According to experts, today the process of baking bread has become easier. Manufacturers use additives and flavor enhancers, so bread can be different from the one that was made decades ago. Another important distinction from the former system of bread baking is government standards.

"Bread factories had laboratories which strictly monitored the quality of the bread," said Yuri Katsnelson, the president of the Russian Guild of Bakers and Confectioners. “Now almost the entire bakery business is private, and the manufacturer is not answerable to the state as before but to the buyer when it comes to quality.”

Products by Soviet standards are produced even now, but it is rather an exception. Control for safety and consumer rights is in place, but the bakers write and set themselves technical conditions for their products.

It is worth mentioning there is low competition among producers of bread in Moscow, which affects the quality: There is no need to fight for the buyer. After all, the choice is not big.

According to Katsnelson, another factor affecting the quality of bread products is the shortage of qualified personnel. There are no training centers for bakers in the capital.

"We have repeatedly raised the issue with management of the city," he said, adding that he has yet to catch their attention.