Russian Orthodox Church reaching out to compatriots in India 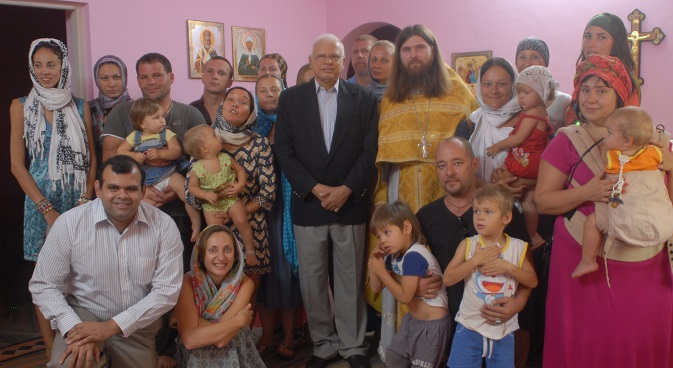 With an increasing number of Russians living in India, the Russian Orthodox Church is looking to provide religious services in the country. Source: Alexandra Katz

The Russian church looks to conduct services for its small community of believers in India, comprising mainly of Russian citizens.

On January 6-7, Russia marks Christmas, one of the most important holidays for followers of the Russian Orthodox faith.  Recent polls have indicated that more than 70 percent of Russians consider themselves to be Orthodox Christians. India has a population of 24 million Christians, most of them Catholic, but there are many different church groups in the country.  The Russian Orthodox Church, one of the largest among Eastern Orthodox churches in the world, has never had any noticeable presence in India. However with an increasing number of Russians living in India, the church is looking to provide religious services in the country.

The first Russian Orthodox Parish in Delhi named after the apostle Thomas was registered in 2006 when Patriarch Kirill, the head of the Russian Orthodox Church (at that time serving as chairman of the Moscow Patriarchate's department for external church relations), visited India.

It was then decided to build a church in the premises of the Russian Centre of Science and Culture in Delhi, however, till today such plans remain on paper. Archpriest Gennady Moroz who is in charge of St.Thomas Church in New Delhi and the head of Russian Orthodox parish in Pakistan and Nepal, told RIR the plans to construct the church in Delhi are still uncertain.

But then came the idea of establishing a permanent parish in Goa, where almost 10,000 Russians live for at least six months in a year. Russian priest Stanislav Rasputin, who is from the Petrozavodsk and Karelia Eparchy, while visiting Goa in September this year said: “I am happy that Russian people in Goa finally feel the need of the permanent parish here. During this mission I could see myself that this is very much required.”

Although the idea of a permanent parish in Goa is yet to be approved by Moscow Patriarchate, the initiative gained support from Russian consulate in Mumbai and the Honorary Consul of Russia in Goa Victor Albuquerque. “Starting a Russian orthodox parish here in Goa would be really good as Russian people need not only beach, sun and parties, but a place for spiritual activities. Though to establish a parish we really need to bring people around”, Albuquerque told RIR.

Preaching to the faithful

Several Russian Orthodox priests have visited India with official and semi-official missions recently. Deacon Georgy Maksimov, one of the first priests to visit India said the church’s main aim was to interact with Russian compatriots. “Not all of them were Orthodox believers, there were atheists and even those who considered themselves converted to Hinduism. We had quite interesting discussions,” he said.

Stanislav Rasputin visited India four times since 2011 and has found an interest in the Russian Orthodox faith from unexpected quarters.  “Several years ago a group of almost 120 Christians from Chandrapur (Maharashtra) sent a request to convert them to Orthodoxy,” Rasputin says. “There was an Anglican bishop who studied the history of church in order to understand where the original church that formed 2000 years ago was. After studying sources he understood that Anglicanism that emerged in the 16th century was not at all complete as it did not have the continuity with the original church. He understood that the Eastern Orthodox Church was the one closest to the origins”. The ex-Anglican priest and his large congregation were converted by Stanislav Rasputin in 2012.

The services are conducted by the Russian priest not only in English but in Marathi, thanks to local church leaders who translated the Liturgy and some books on church history into local languages.

“I think it will be right to say that Russian Orthodox Church is not preaching the gospel in India,” insists Father Gennady Moroz. “And to face any critics in India the Russian Orthodox Church has firstly to be established there. The rare visits of orthodox priests that happen as the result of multiple requests from believers cannot be called missionary work.” He emphasizes that that Moscow Patriarchate can send a priests to India only after receiving repeatedly requests from people living here.

Eastern Orthodoxy is definitely not as popular in India as various beliefs collectively known as Sanatana Dharma, the discipline in which various religious doctrines of Indian origin rooted, are in Russia. There are about 20,000 thousand believers of the Sanatana Dharma in Russia, according to various estimations, most of them – part of International Society for Krishna Consciousness (ISKCON) in Russia as well as Indian community in Russia which totals about 5000 people.

However, the only Hindu temple in Russia, ISKCON temple in Moscow, is under the threat of being demolished due to long- pending issues with land allocation.

Sergey Andreev (Shyam Prabhu), the new temple project coordinator, told RIR that currently it is not clear when and where ISKCON may get another land plot instead of the one cancelled by Moscow Government recently. Meanwhile, ISKCON is fighting a legal battle against a Moscow government decision in an arbitration court. ISKCON has spent about $2.5 million raised by the community for preparing the technical documentation for the new temple.

Andreev believes that while Delhi sees the expansion of Russian Orthodox Church in India and ISCKON complexities in Russia as interconnected issues and a matter of diplomatic relations, Moscow has not yet understood the importance of the issue for the relations between two countries.

“We are hoping the sense of reason and the understanding of the need to look after the people’s interest will triumph over the bureaucracy. We handed over a petition signed by more than 50,000 people that reflects quite broad interest of the public in this project,” Andreev said.

Radharaman Das, General Manager Kolkata branch of ISKCON, believes that although some Orthodox Church activists protested against the Krishna temple in Moscow, Indian ISKCON followers will never protest construction of an Orthodox church in India. “India has always welcomed everyone who came to India for centuries with open heart. The proof is that India has one of the oldest and largest Jewish, Christian and Muslim communities, which has become the part and parcel of the fragrance of India,” he added.

Sanjit Kumar Jha, head of the Indian Association in Moscow, agrees that Indian people are welcoming various religions with great generosity. “All our community in Moscow was happy to know about the plans of Russian Orthodox Church in India as we understand how important it is for Russian people who live in Indian to be able to satisfy their spiritual needs. But we also want the same level of understanding of our needs from Russian side,” he said.