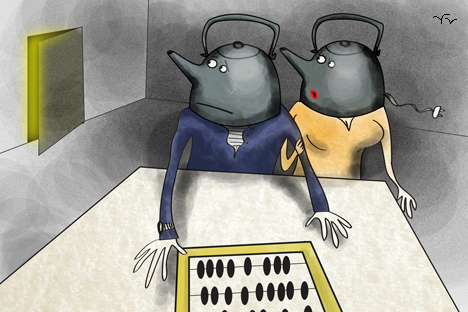 The emergence of new communication devices like smartphones has added to the everyday vocabulary of Russians.

After the war, every Soviet apartment was equipped with a "radiotochka," which was basically a cross between a public loudspeaker and a radio. This radio could broadcast just one government station, and in wartime it was used to issue warnings.

The radiotochka was a big black speaker, similar to a plate, and so Russians began to call it a "plate."

The black plate became a defining symbol of the totalitarian era. The broadcasting network has remained to this day, although the "plates" were replaced long ago with devices that look like radios and can pick up not just one, but three stations.

Beginning in the 1950's, the first vacuum tube radios appeared, and then were followed by transistor radios. Western radio stations like the Voice of America, Freedom, Deutsche Welle, and others broadcasted on shortwave frequencies in the Soviet Union, but those stations were often jammed, resulting in an unrecognizable cacophony.

Televisions were still a rarity in the 1950s, and families that had a television found they couldn't say no to people that came over asking to watch it.

By the 70s and 80s almost every family owned a television. Millions of people would watch a movie or program at the same time and then would later discuss it. In the post-Soviet period, people started to look down on the television.

Today the television is a symbol of undiscriminating fans of popular culture, and it is not just intellectuals that call it simply a "box." And since the television is also a tool for mass propaganda, sometimes it is called a "zombie box," an instrument for indoctrinating people.

It is considered in good taste to say "I don't watch TV," however, people who say that are usually up to date with all the latest televions trends.

In the 1990s, another kind of "box" was introduced into Russian homes - the computer. In Soviet times, their predecessors, which occupied entire rooms in scientific research institutions, were called EVMs, an abbreviation of electronic calculating machine, but this name is already out of date.

The new generation of desktop computers were simply given the name of komps. When the old 386s and 486s were replaced by the powerful Pentium, Russians quickly dubbed it a Pentyukh, which means a stupid, slow-witted man. Further shortening the name led to Pen, which in Russian means tree stump.

How difficult is the Russian language?

A significant part of the computer lexicon in Russian has been directly borrowed from English, such as the word "user." However, there are exceptions. Russians call software soft, but for hardware they use the word zhelezo (iron).

The motherboard in Russian becomes mat (mother) and the keyboard (klaviatura in Russian) was given the female name Claudia. If the computer has a glitch, Russians call it a glyuk, slang derived from the word hallucination.

If a komp is running very slowly, it is "putting on the brakes," and if it freezes up, it is "hanging." And instead of pushing a button on the keyboard, Russians say they are "trampling loaves of bread" (the word button sounds like the Russian word baton, a loaf of white bread taken from French originally, of course!).

People that are unfamiliar with computers are called "tea pots." And those poor tea pots are often confused by computer terminology. In a well-known joke, an old lady complains, "These new rich people have really gone crazy. Yesterday in the store, one even bought a pad for his mouse." What if she had overheard his regret over the fact that his "mouse died."

When the user deletes a program, the bloodthirsty Russians say he "kills" it, or at least "demolishes" it.

If a computer mouse lives on a mat, the computer dog lives inside the e-mail address. You see, the @ sign is called "sobaka" (dog) in Russian. And email itself sounds to a Russian like the word for soap (mylo). The phrase "throw it to me on the soap" means "send me the information by e-mail."

But the newest generation of electronic devices is no longer generating new names. The words notebook, iPhone, and iPad (even gadgets and devices) have made their way into Russian virtually unchanged.

However, mobile phone has been shortened to "mobily" and tablet computers are called "planshet" or even "planshetnik" from the French planchette. And finally, Russians don't send texts, but "esemeski," from the abbreviation SMS. The word has even been included in modern dictionaries in this form.