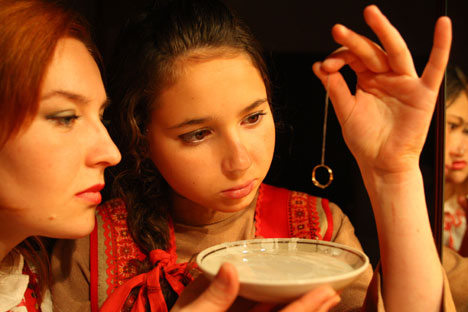 In Rus’, the Christmas and New Year’s period was always thought to be imbued with particular magical powers. Yet the rites and traditions connected with it have roots not only in Christianity, but also in old Slavic beliefs.

The Russian church celebrates Christmas according to its date on the Julian calendar, or the “old style,” as it is called in Russia. This calendar lags behind the modern Gregorian calendar by around two weeks. Therefore, Christmas in Russia occurs on January 7, not December 25, as it does throughout Europe. Nevertheless, many centuries ago no time difference between these two calendars existed, and in both Rus’ and the rest of Europe, the Christmas holiday occurred around the winter solstice.

Ancient traditions connected to pre-Christianity sun worship that later came to fall around Christmas have survived from that period. The most widespread practice of our farmer ancestors was the prediction of weather and the harvest based on natural phenomena observed on Christmas:

If there is frost on Christmas, there will be a grain harvest.

If there is a snowstorm on Christmas Eve, there will be early foliage.

If it is warm on Christmas, there will be a cold spring.

If there is a snowstorm, the bees will swarm abundantly.

If there is a starry sky, there will be a pea harvest.

If there is good sledding, there will be a buckwheat harvest.

However, in order to get a more “precise picture” of the following year, peasants would engage in fortune-telling, despite the church’s categorical prohibition of it. The longest night of the year came in handy here: according to Slavic legends, on this day the little evil spirits were especially active and happily communicated with people. Yet although people expected their questions to be answered by wood goblins, sprites and elves, the incantations themselves could be addressed to Christ, the Virgin Mary and saints.

The fortune-telling could relate to anything: the household’s wealth, success, marriage in the coming year and more. At the same time, the methods of fortune-telling varied—they ranged from telling fortunes based on dreams and objects to actual witchcraft involving animal sacrifice at crossroads.

Our ancestors’ greatest inventiveness manifested itself in fortune-telling relating to marriage partners. This is not surprising: the Christmas holiday marked the end of a 40-day fast during which weddings were forbidden, so right after Christmas a church “wedding period” began.

Arguably, the most extravagant method of ascertaining the identity of the future spouse was the following. At midnight a girl would go to the sauna, turning the lap of her skirt onto her head and exposing her buttocks. She had to enter the sauna backward saying, “Rich peasant, hit me on the buttocks with a hairy hand!” If a hairy hand touched her body, her betrothed would be rich; if the hand was hairless and brutal, he would be poor and fierce; if it was soft, the husband would have a soft character.

Along with purely pagan rites, the holiday is rich in Christian traditions. For example, on the day before the celebration, Christmas Eve, a strict fast was observed: one could not eat before the first star appeared in the sky, and even the food on this day was simple and meager—it consisted of wheat kasha (sochivo, or soaked grains, from which the word sochel’nik, “Christmas Eve,” derives). This is a distinctive tribute to the star of Bethlehem, which announced to the people the birth of Jesus Christ.

In addition, it was traditional to distribute alms on the day before Christmas. This custom has been around for a long time, and the tsar himself, as well as people of all other professions, took part in it. In the 16th and 17th centuries, on Christmas Eve the sovereign would visit the prisons and poorhouses and personally give gifts to the inmates. The destitute and needy, knowing that the tsar was going to travel through the streets handing out money, would gather in advance from all around Moscow.

The religious service in an Orthodox church begins in the evening and lasts until morning. At the end of it, worshippers mark the festivities: the table abounds in holiday dishes and guests are invited. During the course of the day, unsummoned—but no less welcome—guests visit houses: these are the carolers. Beginning on Christmas morning, it is customary to sing the praises of Christ. All of Orthodox Rus’ enjoyed going from house to house singing the praises, or caroling. In carols and couplets, the singers would wish happiness to the household and master, while the master, depending on his means, would give them money or homemade pies. It is known that even Peter I accompanied carolers on their visits to boyar and merchant homes to praise Christ.

Christmas celebrations continue over the next 12 days, which are called “Yuletide,” and last until the next major Christian holiday, Epiphany.