Politicians and corporates take up theatre 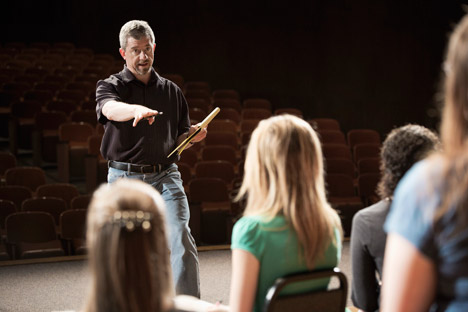 Drama classes are becoming increasingly popular for senior executives and politicians in Russia.

Sergei Shentalinskiy, a Russian Actor, teacher, director and author of the acting technique training method for businessmen, explains why many Russian politicians and business leaders have started studying acting.

In the United States and England, politicians popularized taking acting classes in the ‘50s, whereas we in Russia started doing this just in the beginning of the 20th century.

The first lesson I gave was a pilot one; it was free. A car salesman, marketing consultant and real estate specialist gathered together to try. Just after a few exercises I noticed how their eyes lit up – they immediately wanted to take the whole course.

At that time I had already been teaching at the Moscow Art Theatre School for some time and couldn’t even imagine what people from the theatre world could have in common with business world representatives.

But what I saw was a completely different and new world, which is quite interesting, strong and creative. Senior executives are often very talented and diversified people.

At first my main motivation was money – in order to take up some kind of creative field you need a financial "safety cushion.” This gives you the ability to carry out various theatrical projects.

For example, one of my trainees fully sponsored two Moscow Art Theatre School trips to New York with five plays, which were later performed in the Baryshnikov Arts Center.

Another trainee sponsored the play “I am afraid of love” in Theater.Doс, in which I also play. But then I got seriously engrossed in teaching.

Around 300 people have attended my master class. I usually start my class in a group, but then move on to an individual approach; it depends on the student’s goal (to lead intricate negotiations, or to give an important interview, for example).

Among my students were managers of companies such as SAS, Technoservice, Sberbank, Commerzbank, Gazprom, Mone, Huawei, Russian Railways and many more.

In addition, I often work with politicians. I carried out a whole course with the government of the Kaluga Region, with the governor, the ministers and the mayors of regional centers.

There is a strong connection between the well being of a region and the spiritual wants of its management. Deserted and neglected regions just can’t understand why it is worth developing and opening such whims as theatres.

I enjoy working with senior executives more than with politicians. If they take up a course they fully immerse themselves in it. As for politicians, sometimes they just blindly follow the orders of their superiors. Then again, today business and politics are closely intertwined.

There are people who are ataxic, tense and tongue-tied;there are too many things that can make an impact on a person of power.

Such people know so many financial and political secrets, they are so used to being in charge of others that sometimes they just don’t understand whether they are right when nobody stands up to them or whether their jokes are really that funny or if everybody is just forced to laugh because of their position.

I try to carry out exercises that focus on attention, coordination, rhetoric, public speaking -- exercises to develop a certain charm and positive energy.

We work hard on improvisations and on loosening up. This is because if a person is uptight, he not only has sluggish legs and cold hands but he also cannot focus.

An uptight performer often forgets his text, whereas an uptight politician forgets whole blocks of information he was planning to state in his speech.

During their first lesson my trainees learn how to stand, sit and present themselves - it sounds easy, but in reality it is very hard to act natural when there is a whole group of people looking at you with a prying glance.

I have never had students who disgusted me. Of course, there is a lot about them I don’t know. One time I was working with Mirax Group, and Sergey Polonsky attended a few of my classes.

At that time I thought he was a rather interesting person. As for today, if he would happen to contact me to take a few classes I would really need some time to think whether to work with him or not, especially after all those scandals he was involved in.

The motivation of people who come to me is usually very personalized. One of them, a corporate giant chief, once confessed that he can’t make a woman interested in him, that’s why he decided to attend acting courses.

He says that he can buy everything, organize everything to the highest standard but at the same time understands that he’s not the one attracting a woman – it is all about his financial capabilities – this is where his complexes are stemming from. Any man in his shoes would feel the same.

I had another student, the head of a major IT-company. He was a very private person - short, in glasses, inhibited, awkward and incapable of grinning from ear to ear.

He tried extremely hard. His glasses even fogged up, but he still couldn’t manage it, so everybody laughed. Once he offered to give me a lift back home.

Disabled express themselves in special theatres

In my head I imagined him driving in a dignified manner something like a Volkswagen. In reality he drove up to me in a sports car, opened the sky window, grabbed the steering wheel and we drove off on at an incredible speed, violating all the rules. I was so scared that sweat was dripping off of me.

Later it turned out that he is also an alpinist, knows how to manage a yacht and fly a sports plane. As for when he enters a business atmosphere, he starts feeling at a loss.

This was until my classes made him feel more at ease. After communicating with people like him I can finally fully understand that there are real aliens living among us, they float somewhere above our world and all of its problems. They don’t know much about us, and we don’t really know about them. We can only find common grounds through theatre.

This material was published in the International institute of theatre journal ITI-Info №21.