Adventures of Russian rooftoppers in Mumbai 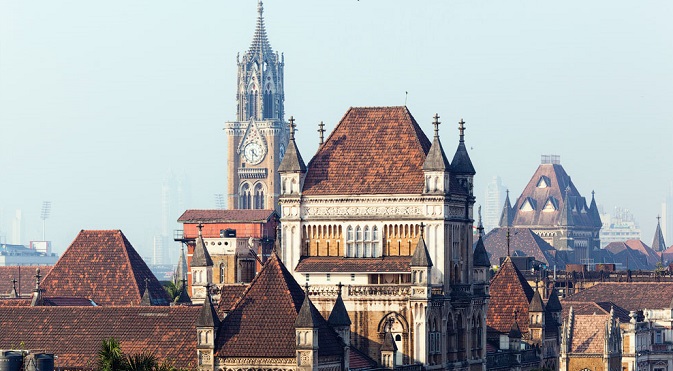 The term "roofer" applies to people who climb roofs for fun and take photographs, but "roofing" may become a good business as well. Source: Vitaly Raskalov

Russian rooftopper and photographer Vitlay Raskalov who shocked the world after climbing the Great Pyramid of Giza with his friends to take unusual photographs of the wonder talks about his experience with the roofs of India’s bustling metropolis.

Rooftopping involves daredevil climbing to the top of a building, either a monument or a skyscraper and taking pictures of views around them. Rooftoppers don’t use any protection or equipment and never get any approval to climb the building. Day or night, sneaking past the guards just adds to the excitement.

Vitaly Raskalov, 20 is one of the most famous rooftoppers in Russia. He started climbing roofs somewhere in 2010 along with other prominent rofftoppers Vadim Mahorov and Kirill Vselenskij among others. After conquering all possible and impossible heights in Moscow they started travelling to Europe and Asia clicking cityscapes of world’s capitals from extreme angles. Vitaly Raskalov spent 10 days in Mumbai last year capturing its Victorian-Gothic architecture heritage and glazed skyscrapers rising from the slums from city’s rooftops. He talks to RIR about his impressions of India’s dynamic metropolis.

Mumbai is a great city!  If I decided to move somewhere I would chose Hong Kong, Bangkok, or Mumbai. It’s one of the most contrasting cities, maybe after San Paulo. Here you can see a 5-star hotel surrounded by slums. The contrasts are striking. Here the heritage monuments are neighbours of modern buildings and poverty mingles with luxury.

Which roof was the most exciting to climb in Mumbai?

Victoria Terminus (now called Chhatrapati Shivaji Terminus) was the most interesting and the most difficult to access. My friend Nastya, who was accompanying me in Mumbai, and I found a tumble down extension to the building that was connected to the roof by a small ladder. From there we managed to climb to the top. It was nearly impossible to sneak in there in the daytime so we did it in the night while the police officers were asleep.

We also climbed the 130-metre high five-star hotel FourSeasons and from there could take pictures of Mumbai cityscape and its mind-blowing contrasts. There is a rooftop restaurant there but we were not allowed inside because of the dress code. So we climbed the roof.

Extreme Russian roofers: on the brink of safety

Is it so easy to access the rooftops in Mumbai? Has anyone caught you while climbing?

It’s not easy in Mumbai at all. There will be a watchman at the gate of any building, commercial or residential. They do not speak English, only Hindi, and it’s almost impossible to explain anything to them. Moreover, there are sometimes families living on the rooftops. They are not at all happy to see such guests.

But we could escape being caught by guards and police. There was couple of times when residents themselves did not allow us to go to the rooftop, especially in the slum areas. When a European-looking guy goes into the slum and enters someone’s house all the locals gather around. You just have to be cheeky a bit.

There are rooftoppers around the world, have you met anyone from India?

No. I know a lot of people from different parts of the world like Canada, Ukraine, France, Australia, Cape Town, Hong Kong, even London though there it is restricted, they cannot even post the photos online. But no one has ever told me about Indian rooftoppers.

Are you planning to visit India again, any new places, any roofs that remain unconquered?

For the sake of traveling I’d like to visit Jammu and Kashmir, Kolkata, Bangalore and Varanasi. But considering roofs - it is only Mumbai. There are some places which we could not climb yet. First is the 254 metre-high Imperial Tower and another is the Palais Royale building which is still under construction. It will be the tallest building in Mumbai, 320 metres high. Our attempt to climb it in the night was not successful, the construction site was well guarded. For the first time I saw an electrified barbed wire fence.

Tell us about rooftoppers in Russia, they are called “roofers” there. How old is this community and where it originates?

Well I think the journalists created this brand “roofers,” but even forty years back people in, let’s say, St Petersburg used to go to the roofs to enjoy city festival celebrations and salutes, the access to the roofs used to be open.  The term “roofers” came somewhere in 2010 when me and some other guys started climbing all possible roofs. Among most famous roofs we climbed were Stalin's Seven Sisters (Moscow’s famous Stalin-era seven skyscrapers), the top of 98-metre Peter the Great statue in Moscow, the roof of 302-metre Moscow tower in Moscow’s new commercial district Moscow City. But today there are only three-four people who are still doing some noticeable job, most of other roofers outgrew this hobby, found jobs, even had kids.

People must be amazed that at the age of 20 you have already traveled half of the world and keep travelling, how do you afford it?

I sell photographs, shoot ads, and sometime get contracts from sponsors like Tele2, The North Face, Nokia, Nike, Aviasales, Hub Footwear and others. I work on my own, so an amount of just $5000-6000 is enough for me to spend half year somewhere in Asia. I fly the cheapest airlines and don’t live in 4-5 star hotels. But a hobby such as roofing is not at all easy to monetize. I think it is only me and my friend Vadim Mahorov who could take this hobby to such level where we can attract sponsors and earn money with kind of stuff that we do. It took us two-three years and thousands of crazy roof climbs to reach this point.