Lenin lives on in bronze and on screen around the world 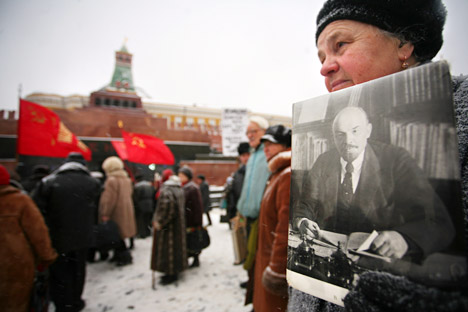 Ninety years after the death of Bolshevik leader Vladimir Lenin, it’s not just in Kerala and West Bengal that his legacy is remembered with fondness. Various kinds of monuments to Lenin still stand around the world, while new art works featuring him continue to be produced.

Busts and monuments – from Cuba to Antarctica

When the Iron Curtain collapsed, many countries tried to shove their Communist past away as quickly as possible. Even though many sculptures of the proletarian leader were destroyed or taken off their bases, an estimated 6,000 Lenin monuments still stand today all over the world.

Images of Lenin are still visible across the cities and countryside of the southern Indian state of Kerala, where every alternate term, a Communist government gets elected to power. The same can be said of Kolkata and other parts of West Bengal, which witnessed over three decades of uninterrupted Communist rule.

Cuba, which still embraces the Communist ideology, has an entire park named after Lenin. Created in Havana as a place for open-air recreational activities of the Cuban proletariat, the park features a 30-feet tall marble statue of Lenin.

In Russia, one of the less conventional Lenin monuments is located in the Urals city of Chelyabinsk. The construction of the mausoleum-like structure featuring columns, a balcony and a bronze bust to the Bolshevik leader, was funded by donations from local workers. It was inaugurated in 1925, shortly after Lenin’s death.

One of the most unlikely places on earth to feature a monument to a communist leader is Mauritius; the capital Port Louis has one, installed back in 1983.

The United States also boasts a few monuments to the communist leader. One is installed on the roof of the 13-story, late 1980s Red Square building in East Village. Created by Russian sculptor Yuri Gerasimov, the statue was never publicly displayed in Russia due to the collapse of the Soviet Union and was standing in the backyard of a dacha outside Moscow before being spotted by one of the building's developers, Michael Shaoul, in the mid-1990s.

A bigger, 16-feet tall Lenin statue is erected on the other coast, in Seattle's suburb of Fremont. Created by Slovak/Bulgarian sculptor Emil Venkov, the statue was originally unearthed in the Slovak city of Poprad in 1988. It remained on public display for just over a year before being quietly removed from its base after Czechoslovakia's Velvet revolution. Several years later, an American teacher found the statue lying in a scrap yard in Poprad, and in 1995, it was installed in Fremont.

Meanwhile, a bust of Lenin can even be found in Antarctica, where it was brought by Soviet researchers back in 1958. The plastic bust has survived till date despite temperatures of around -76 Fahrenheit.

On tape and in plastic: movies and collectables

During the Communist era, dozens of features and documentaries centred on Lenin were made in the Soviet Union, ranging from propaganda pieces of little artistic value to Sergei Eisenstein's ‘October: Ten Days That Shook the World’ and Dziga Vertov's ‘Three Songs About Lenin.’

Filmmakers all over the world have also used Lenin as a character. In Franklin J. Schaffner's ‘Nicholas and Alexandra,’ about Russia's last Czar Nicholas II, dethroned in 1917, Lenin is played by British actor Michael Bryant.

Following the collapse of Communism, the tone of depicting the Bolshevik leader has changed, and he has often been portrayed in less than a reverent way. The 1997 movie Minu Leninid (All My Lenins), directed by Hardi Volmer, is a comedy focused on a fictional school training Lenin's doubles.

But perhaps the best known movie of recent years, which has Lenin's name in the title, is 2003's ‘Goodbye Lenin’ by German director Wolfgang Becker, starring a Russian actress Chulpan Khamatova. Set in the months after the 1990 reunification of Germany, the film indeed features Lenin, but only as a statue being carried away as a relic of the communist past.

In a similar act of re-thinking the Communist past, Norilsk-based artist Oleg Osmuk made comics-like paintings featuring Lenin and other Bolshevik leaders. In one of the pictures, Lenin is seen smashing Batman. Back in the late 1980s, the Perestroika reforms in the Soviet Union made items with Communist symbols fashionable in the West. Collectors were eager to buy Lenin busts and sculptures, which were smuggled rather than officially exported from Russia.

Today, interest in Lenin-related collectables is at a low point. Still, some items related to the Bolshevik leader pop up at online antique stores from time to time. An American company focused on “odd and unique antiques” is offering a 16-feet tall statue of Lenin, which used to be installed near the now-defunct Red Square restaurant at the Atlantic City Tropicana Casino. The erection of the statue back in 2005 stirred some controversy, and the restaurant owners had to remove the head of the statue and cover it with something resembling pigeon excrements to avoid undesirable historic associations.

Judging by photographs from the seller, the statue is in good shape now, and the price tag is $40,000.

Meanwhile, those interested in something cheaper could buy a porcelain bust of Lenin, offered by another online antiques store at $129.