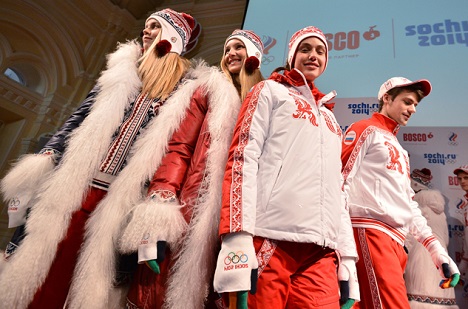 At the official presentation of the Russian team’s Olympic uniforms, many were surprised by the riot of color. Source: RIA Novosti

The procession of national teams at the Olympic opening ceremony looks more like a fashion show.

The Russian Olympians: Beautiful maidens and heroes from the legends

The host nation of the 2014 Winter Olympics will try to set the fashion trend through a tasteful combination of local flavor and individuality. There will be no retro and no ostentatious pageantry this time. The emphasis is on convenience, comfort, advanced manufacturing technologies, and… a little bit of fairy tale.

At the official presentation of the Russian team’s Olympic uniforms held just before the New Year, many were surprised by the riot of color. The women wore fur trimmed down coats in the colors of the Russian national flag — blue, white and red — and decorated with folk patterns. Each one of them looked for all the world like Snegurochka, Father Christmas’s granddaughter, according to Russian folk tradition. The Russian men, meanwhile, sported double-breasted overcoats with natural sheepskin trim, and traditional Russian hats with earflaps.

As for the Sochi 2014 sports collection the athletes will wear at the Olympic village and other informal occasions, it will be radically different from last years’ design. At the previous games Russians could be recognized by thePhoenix feather and traditional patterns on their jackets. This time around they will sport a large and prominent RU sign. On the one hand, this is a recognized international abbreviation for Russia. On the other, the letters look like the silhouettes of two fairy tale characters, Pegasus and Griffon, which were first unveiled to Russian fans in 2012. These symbols are supposed to bring good luck.

Another distinctive feature of the Russian Olympic collection will be special outfits in which athletes will appear only at the medal ceremonies. These include a stylish down jacket in the Russian national colors. These limited-edition uniforms will only be available to athletes from the national team; the champions’ jackets are not for sale.

Pavel Bure, a former Russian ice hockey world champion and Olympic medalist, was full of praise for these innovations. “The presentation of the national outfits and the ceremony where these uniforms are issued to the athletes are extremely emotional events,” Bure said. "It is when you receive the uniform that it finally hits you: the Games are just around the corner. And when you first put it on, you really start to feel like a part of the team. It brings on this spirit of unity, and you realize that you are an inalienable part of the country you represent.”

At the medal ceremoniesathletes will appear only in special outfits. Source: RIA Novosti

Now that we are clear about the Russians, what about the other national teams? The Germans have obviously decided to attract the attention of billions of television viewers with their bright colors. Their rainbow uniforms initially raised some eyebrows in the international community. Officials had to explain that there were no political signals being sent through such design choices. A press release by the German Olympic Committee insists that the color palette reflects “the Sochi landscapes;” turquoise is for the waters of the Black Sea, yellow for the sun and sand, green for palm trees, and white for snow in the Caucasus mountains.

The Americans, meanwhile, managed to avoid any scandals this time around. Their Olympic uniforms were designed by none other than Ralph Lauren; they also used his services for the London Olympics. Some patriotic Americans were left distinctly unimpressed by the 2012 collection because the clothes were actually made inChina. After that controversy, the U.S. officials decided that the uniforms for Sochi must be made in America. Their design adheres to the traditional American style. The outfits for the opening and closing ceremonies are said to be a dynamic combination of patriotic and sports motifs, while the collection for wearing at the Olympic village consists of a brightly colored woolen sweater, a polo shirt underneath, and a fleece on top. The accessories are decorated by the U.S. flag and Olympic symbols. They include knitted caps, gloves and scarves, nylon bags, jumpsuits, and a limited edition of Polo Bear for the closing ceremony.

Looking back at the recent Olympics in the British capital, let us recall other national teams dressed in haute couture collections. The Italian fashion designer Giorgio Armani, who created uniforms for the Chelsea and Inter Milan football clubs, also made a special collection for his country's Olympic athletes. It included more than 50 different items, as well as luggage. The Italian team’s clothes had the first line of the country's national anthem embroidered on the inside. Interestingly enough, the team of Italian yachtsmen turned instead to another designer, Miuccia Prada.

Meanwhile, the hosts of the London Olympics tapped into the creative genius of Stella McCartney, who worked in cooperation with a well-known sportswear brand. For two years she labored on a new motif for the British national uniform based on the Union Jack. According to some discerning Brits, she achieved only a qualified success; they believe that the red color, which dominates the British flag, was lost among the others.

Various combinations of green, yellow and black were also very popular in London. The uniforms of the Jamaican team were designed by Bob Marley's daughter Cedella. She drew her inspiration from the Jamaican music and culture of the 1970s and 1980s. She also made use of her country's African roots. The Jamaican collection included various dresses, flared skirts, and a single-breasted service coat. The main male model used during the presentation was the sprinter Usain Bolt, the fastest man on the planet.