Looking to recapture past Olympic glory 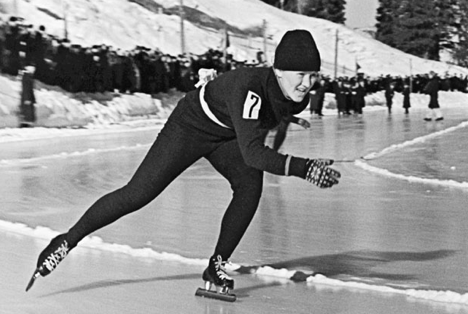 Russian and Soviet teams have performed exceptionally well in the Winter Olympics in the past. Olympic legends share their thoughts on the Russian team’s chances at the upcoming Sochi Olympic.

At the 2010 Olympics in Vancouver, the Russian national team achieved 11th place in the medal-winning team standings but won only three gold medals.

Next month, the Russians will have a chance to restore their reputation when the 2014 Winter Olympics start in Sochi. According to Minister of Sports Vitaliy Mutko, Russia has a good chance of winning seven to nine gold medals and become the third best team overall in terms of total medals.

The Urals Lightning that conquered Innsbruck

For athletes from the Soviet era, such predictions seem far too cautious. U.S.S.R. team members never thought of achieving anything else but first place. For example, the legendary Soviet speed skater Lidia Skoblikova won twice as many Olympic gold medals during her sports career as the entire Russian national team did in 2010.

Skoblikova was born into an ordinary Soviet family in a small Urals town called Zlatoust. To go to the local cinema on weekends, Skoblikova saved money and walked to school for 12 kilometers instead of taking a tram. Difficult living conditions hardened the future speed skating champion, who could endure all physical exercises during her training sessions.

According to Skoblikova, her ordinary training included a 40-minute warm-up, a cross-country race and 12 acceleration runs of 500 meters each. Such extreme efforts soon yielded great results. The 20-year-old Skoblikova became a member of the Soviet national team and went to the 1960 Olympiad at age 21.

In the Squaw Valley Olympics, the Soviet anthem was played twice, celebrating the success of the young Soviet sportswoman, who turned out to be the fastest on the ice in two distances – 1,500 meters and 3,000 meters. In those days, no one could imagine that this was only a prelude for the Olympic symphony of success, which Skoblikova would create in just four years.

The world press dubbed the Innsbruck Games as “Skoblikova’s Olympics” as the 24-year-old Urals Lightning managed to achieve what no one had ever done before. Skoblikova took to the ice four times, and every time she came back with a gold medal.

Such top speed skaters as Klas Thunberg from Sweden, Ivar Ballangrud and Hjalmar Andersen from Norway, and the “Flying Ducthman” Ard Schenk, each won three medals in one Olympic Game, but Skoblikova’s record still remains unbroken.

“I wish all our athletes good luck at the Sochi Olympic, but unfortunately, I do not think that we can surpass the results we achieved in Vancouver,” Skoblikova said. “Our country is suffering from a demographic crisis, and children today have other interests.”

Lyubov Yegorova: From ski-track to politics

Skier Lyubov Yegorova is another Russian sportswoman to match Skoblikova by the number of Olympic gold medals.

Yegorova achieved first significant success at the 1991 World Championships at Cavalese, where the skier became a world champion as a member of the relay race, and then showed the best results in the 30-kilometer race.

One year later, Yegorova participated in the Olympic Games in France. At Albertville, Yegorova won the gold medal in the 5-kilometer and 15-kilometer races. In the 5-kilometer sprint race, the four main contestants were only 8 seconds apart, but after a fierce struggle, Yegorova managed to be the first to cross the finish line.

In the skiing relay, the Russian women outran their rivals from Norway by 20 seconds, and Yegorova, a common girl from the Russian city of Tomsk, became a three-time Olympic champion.

At the 1994 Games at Lillehammer in Norway, Yegorova showed her superb skills once more by securing victory in the 5-kilometer and 10-kilometer races, and in the 4 x 5-kilometer ski relay.

After the contest, Yegorova was welcomed with honors in St. Petersburg, where she had moved after graduation. The city mayor presented the champion with keys for her new apartment, and the Russian president signed an order to award Yegorova with the title of Hero of Russia.

Yegorova is the only person in the world that can really know what made her turn to doping. At the 1997 world championship at Trondheim, her drug test indicated the presence of a forbidden medication. As a result, Yegorova was disqualified for two years, and that was the end of her skiing career.

Nevertheless, Yegorova did not abandon sports altogether. Since March 2007, she has been a member of the St. Petersburg legislative assembly to supervise sports activities in the northern capital of the country.

“I have a good premonition about Sochi: a new generation of athletes has grown in Russia. You know, at home even the walls help; judges are always kind to the hosting country’s team. We must admit we are weaker than Canada, the United States and Germany now, but we can still compete as equals against athletes from Asia and Scandinavia.”

Alexander Tikhonov: A champion with a heart disease

The most award-winning Russian champion of winter sports, biathlete Alexander Tikhonov, had to go through the hardest paths of life before winning world fame.

The man was born with heart disease, and when he was only five years old, he fell into a pot of boiling water and had to spend one year in the hospital for treatment of severe burns.

Tikhonov took up skis only in high school: after graduation, however, he did not go to a sports college, but preferred to learn the skills of a bricklayer. Being a member of the vocational school team, Alexander was noticed by the regional skiing team coaches, and later by coaches of the Soviet national team.

Yet Tikhonov would not become a member of the national team because a foot injury prevented him from going to the world championships. Instead, Alexander went to Estonia for treatment and recuperation, the same place where Soviet national team of biathletes was training at that time.

This very trip decided the fate of the great champion. The young man from Chelyabinsk Oblast picked up the rifle and stuck to it for another 14 years, in which he managed to break all records in this field of sports.

He became a four-time Olympic champion, the silver medalist of the 1968 Winter Olympic Games in Grenoble, and 11-time world champion, and a 15-time champion of the Soviet Union. For a long time, Tikhonov was the chairman of the Russian Biathlon Union, and he also headed the International Biathlon Union from 2002 to 2009.

“I do not give forecasts, as I am rarely wrong, and I have bad premonitions as to our medal-winning prospects so far,” Tikhonov told RIR.