Five cultural events for the week of Feb. 3-9 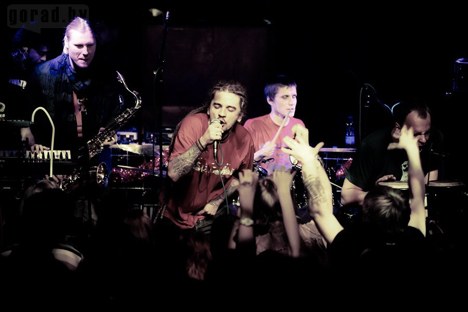 A reggae festival; classic Lithuanian photography; Butman and Spivakov onstage together; the Olympics in exhibition; a tribute to Freddie Mercury.

Two renowned orchestras—the Moscow Virtuosi, under the baton of Vladimir Spivakov, and the Igor Butman Moscow Jazz Orchestra—onstage together at the Moscow House of Music; what could be better? Butman’s orchestra, one of the premier classic jazz ensembles, has performed at the most prestigious concert venues worldwide. The Moscow Virtuosi is among Europe’s best orchestras, boasting a busy concert schedule.

Besides talent, Maestro Spivakov and his musicians are known for their sense of humor. The current programming is more proof of it, with the classical-music and jazz orchestras in a combined performance titled “The Seasons in Classical and Jazz” and featuring works by Tchaikovsky, Borodin, Piazzola, as well as Benny Goodman, Herbie Hancock and other jazz greats. The night will also feature unexpected juxtapositions of classical pieces in jazz arrangements, and vice versa.

The Queen Classic at Crocus City Hall is a tribute to Queen, the legendary British rock band,. In Moscow, Queen’s songs will be interpreted by the Canadian singer Johnny Zatylny, who has been impersonating Freddie Mercury onstage since 2000. The accompaniment by the Berlin Symphony, that is its academic arrangements, will present the music everyone knows in a new light.

The Lumiére Brothers Photography Centre in Moscow is hosting an exhibition titled “Genius Loci. Classic Lithuanian Photography,” featuring more than 200 works by outstanding Lithuanian photographers from the second half of the 20th century.

When Lithuania was part of the Soviet Union, it was the most Western, the most European republic in the Union: geographically, also thanks to its predominant Catholicism, and because it had been independent up until WWII. Lithuanian photographers reflected the Western trends and fads of the day more so than others who were culturally isolated behind the Iron Curtain.

Unlike other Soviet photo-artists, Lithuanians found themselves in the international context as early as the 1960s, with artists having access to Western magazines and submitting work to international competitions. Lithuania was even called “a photographic republic.” Classic Lithuanian photos are certainly unique: the local color is immediately recognizable in the Klaipeda seashore, the dunes, and the cult-classic Lithuanian bicycles. All this adds up to a powerful genius loci.

The Moscow Manezh, the country’s premier exhibition hall, will host an exhibition titled “A Season of Victories,” devoted to the Sochi Olympics and the centennial of the Olympic symbol: the five interlocked rings. The exhibition will present Olympics-themed coins, Olympic medals, the uniforms of great athletes, trophies, and other memorabilia.

The curators have invited artists Francisco Infante, Boris Orlov, Ilko Brandt and others in order to showcase the processing and interpretation by modern art of the symbolism and significance of the Olympic movement.

On February 7, Volta, a Moscow club, will host the 5th Reggae Festival in honor of the birthday of Bob Marley, the seminal reggae artist. The Rasta movement in Russia started back in the 1980s. Despite the cold weather and general gloominess (or, perhaps, because of them) people in the former Soviet Union love the sunny Jamaican beats. Marley’s memory will be honored in wintry Moscow by Russian, Ukrainian, and Belorussian bands spanning a few generations: Roma VPR and The Festival of Everything in the World, Addis Abeba, The Committee to Conserve Heat, Rapapam & Dubchikidub, and others.