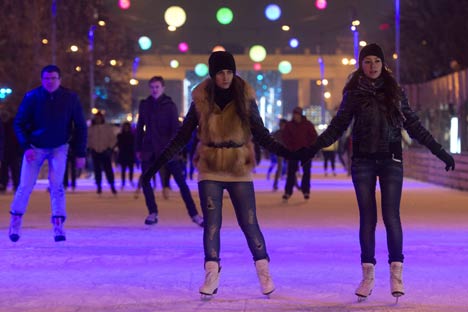 Countless slang can be used to describe women in Russian. Source: RIA Novosti

Words referring to women are a touchy subject in any language, and Russian is no exception.

In slang, almost anyone can be a mother or “old girl” (старуха), as in the song by Boris Grebenshikov: “Come on, mother, jump into my bed!” (А ну-ка, мать, беги ко мне в кровать!).

In the 1960s, slang was primarily replenished from the English lexicon; so it is not surprising that the word “gerla” (герла) became commonly used then. The English “girl” came into the language mainly because it is was repeated many times in the eponymous song of the Beatles—the only one of their songs that was released on Soviet vinyl records (the name of the song “Girl,” or “девушка,” in Russian, was followed by the inscription “Folk music and words, performed by an unknown vocal and instrumental group”).

In parallel with “gerla”, the Russian word “tyolka” (тёлка) became widely used in slang. “Tyolka” is a young cow. This term is not exactly linked to the word “cow” (корова) – which is usually a derogatory term for a fat woman – but rather with the word “tyelo” (тело), which means “body.”  The contemporary author Sergei Minayev recently chose a title for one of his most popular novels by combining the Russian slang word with the English definite article: “The Tyolki” (The Тёлки).

Still, it is insulting to call a girl a “tyolka” right into her face. But other animal metaphors are usually used as compliments—for example, “bunny” (зайка) or “pussycat” (киска). However, where women are concerned, comparisons with dogs should be avoided. The word “suka” (сука) used to refer to female dogs, is very rude, almost obscene and more of a curse – like its English translation. This can be illustrated by an anecdote about female logic:

Husband to wife: “Honey, keep your voice down.”

Wife: “Am I too loud? Do you mean I am shouting? So you’re saying that I’m barking? Mother, he just called me a bitch!”

Harassment against women in the workplace in Russia: myth or reality?

Another absolutely obscene word comes from the ancient Russian word “blud” (блуд), which was used to refer to lechery. In slang, “blud” means a woman of easy virtue. A no less offensive equivalent is the word “shlyukha” (шлюха), which means whore. However, during the years of perestroika in the late 1980s, the scornful attitude toward prostitutes suddenly changed to sympathy and even envy. The fact is that these girls, who catered to foreign tourists in expensive hotels, earned in one night the amount equivalent to the monthly salaries of their parents.

Paradoxically, the trade of the “foreign currency hooker” (валютной проститутки) became romanticized in the public consciousness. A detailed report about their hard life, “Nocturnal Butterflies,” appeared in the popular newspaper Moskovsky Komsomolets. There was also the tragic melodrama “Intergirl,” which made a triumphal appearance on the silver screen. These “intergirls” were called by a beautiful Italian name—“putana” (путана). In those years, the following anecdote became rather popular:

“You finished school with honors, you graduated from university with honors, too, and you started graduate school. Why are you now a putana?”

“I must have been lucky.”

Prostitution is not an official trade in modern Russia, but the black market of sexual services is extensively developed. Since it is prohibited to openly advertise these services, they use euphemisms that are clear to everyone: For example, “leisure” (Досуг) or “escort”(Эскорт) is just a legal substitution for the phrase “sexual service” (Интим). When the editor-in-chief of Moskovsky Komsomolets was criticized for the fact that he published hundreds of promotional offers featuring the word “leisure,” he replied that he could not refuse the advertisers.

In slang, the verbs “to pick up” (снимать) or “to glue” (клеить) are used when a guy tries to meet a girl. Another present-day joke focuses on the ambiguity of modern slang, combined with the realities of life, which have radically changed in recent decades:

What does the sentence “The boy glued a model in the club” mean?

30 years ago, it meant, “The boy made a model of an airplane in an after-school program.”

Today it means, “The boy picked up a hot girl at a nightclub.”