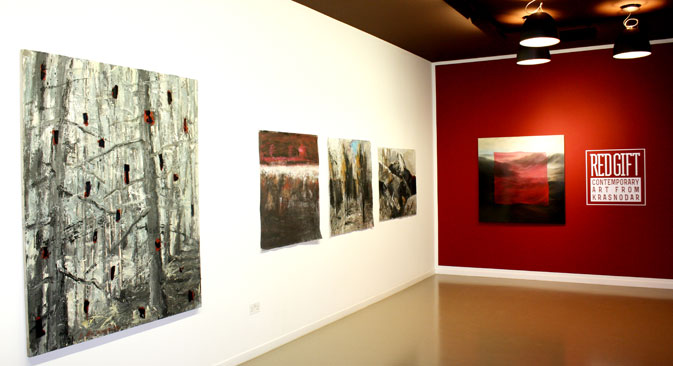 Erarta London opens its door to artists from Krasnodar, the region where Winter Olympics host Sochi is located.

Krasnodar, the sub-tropical corner of Russia with all its natural charm and distinctive qualities has long been admired, no more so than during the Winter Olympics. The Krasnodar region exemplifies Russia, everything from the beautiful beaches of the Black Sea in the south, the snow-capped mountains and forests, fertile fields and vineyards, to the steppes in the north.

Erarta Galleries London's new exhibition on Berkeley Street in Mayfair showcases the works of Dmitry Kochanovich, Sergey Yashin, and Vladimir Migachev, three contemporary artists from the Krasnodar region. Having previously exhibited together as part of the ‘Krai’ exhibition at the Erarta Museum in St. Petersburg in July 2013, director Beth Morrow sought out these three artists to capture their individual artistic impressions and interpretations of the region currently under the Olympic media spotlight.

“Red Gift: Contemporary Art from Krasnodar highlights these three artists’ very diverse landscape, expressionist and idealist inspirations, clearly born out of the varied Krasnodar landscape," she said. "We’re very proud at Erarta to be able to showcase such a broad range of artists to the rest of the world.”

The exhibition fuses a myriad of media and subject matter under a distinctly Russian, even Krasnodarian theme. Vladimir Migachev moved to Krasnodar at a young age and enrolled in the State University there. His monumental landscapes express the power of Krasnodar, revealing the synthesis of the national spiritual culture. “The beauty and fertility of these southern lands formed me as an artist” he says. “The nature of the Taman Peninsula is a great source of inspiration to me, it gives me a canvas to respond to social and political issues.”

In stark contrast, Dmitry Kochanovich’s images of Krasnodar are best described as empathic landscapes. Remarkably, Kochanovich studied under Migachev when the latter was teaching at the Kuban State University, and he clearly had an enormous influence on the young Dmitry. Romantic and idealised, Kochanovich’s effortlessly polished paintings present the natural world harmoniously balanced. Kochanovich finds no inspiration in Krasnodar itself which he describes as “ugly”. “As an artist, I don’t depend on the city to inspire me… for inspiration I go to Italy, or the mountains not far from Krasnodar, they are inscrutably beautiful!”

The work of the third artist in the group show, Sergey Yashin, moves indoors and presents the land of Krasnodar interiorised. Having returned to Krasnodar after 10 years in St. Petersburg, Yashin’s painting is characterised by the artistic elegance tuned in the northern city, balanced by expressive energy.

Speaking about his birthplace, Yashin says: “I returned for the southern weather, I missed it terribly in the raw and windy Petersburg!” Like the other artists in this comprehensive exhibition, Yashin drew influence from the unique landscape of the region. “Krasnodar itself is chaos!” he declares. “Architecturally most of the houses are built to personal taste and it depresses me. However, not far from Krasnodar is the sea and the mountains, and it is there that I find the inspiration for my art.”

Evidently in agreement about the picturesque landscape of the region, all three artists also concur on the southern temperament of the people from the region. “The natural bounty of this region affects you from birth” says Yashin. “There are many interesting people from Krasnodar, but more often than not they leave to make money in the capitals.”

Although it is true that the artistic world in Russia is highly centralised in Moscow and St. Petersburg, Migachev has noticed the emergence of talented youth in the region.

VIDEO: Krasnodar, the biggest city on the route to the Black Sea

“The artistic status of the city is nowhere near as active as in Moscow or Petersburg, this is in part due to the lack of galleries and exhibition spaces here… What should be noted, however, is the emergence of young artists introducing new artistic techniques. I must say that in Krasnodar a noticeable number of artists are distinguishing the artistic situation in the city.”

Sales of all artwork are reinvested into the Erarta project to support the international representation of emerging contemporary Russian artists.