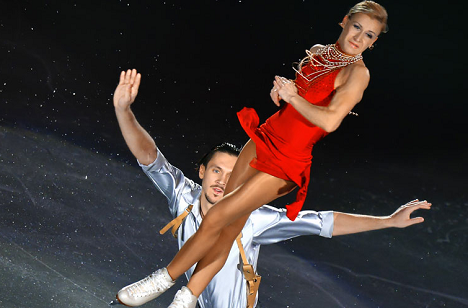 Will the duo of Tatyana Volosozhar and Maxim Trankov be able to handle the emotions of the Olympics at their first games together?

Expectations couldn’t be higher for pairs figure skating team Tatyana Volosozhar and Maxim Trankov, who burst onto the stage of the world figure skating elite in the 2010-2011 season.

Before that, Volosozhar had competed for Ukraine with Stanislav Morozov and Trankov with Maria Mukhortova. While skating with Morozov, Volosozhar had won some national champions and placed in various stages of the Grand Prix, major success eluded them.

Trankov and Mukhortova won three European medals, but the pressure on the team prompted Trankov to change both his partner and his coach.

Right from their first performances together, Volosozhar and Trankov seemed made for one another. In tune on the ice, they are together nearly 24/7, inseparable even away from the rink, according to Instagram. Discussion of a romantic involvement and its role in their success was inevitable, but they have said nothing specific along those lines.

The slippery slope to Sochi

Despite their front-runner status, the route to the Olympic podium is as slippery as ice. The pair set six world records at their first two outings, for the short and free programs, as well as combined score.

Their performance at Skate America in Detroit, the first event of the 2013 Grand Prix, melted even their highly critical coach Nina Moser, who said: “I just enjoyed it so much – I had goose bumps after the free program!”

But then came a surprise slip-up in the Grand Prix final. The skaters had already won the short program when the jumps in their free program proved to be too much. The error left them in second place to their perennial rivals, Germany’s Aliona Savchenko and Robin Szolkowy.

The Russian pair didn’t get a chance to take revenge in the European Championships because the Germans withdrew, citing illness, but again, there were mistakes in the jumps and throw jumps.

They lost the free program on points to Team Russia’s second pair, Kseniya Stolbova and Fedor Klimov. Volozoshar and Trankov won the gold only because of the lead they had established after the short program.

After the competition, three-time Olympic pairs champion Irina Rodnina wrote to Maxim Trankov on Twitter, saying: “Congratulations and no offense, but I would like to have seen more ‘concentrated, centered’ skating and a focus on results.”

Ingo Steuer, who coaches Savchenko and Szolkowy, reached his own conclusions: “We realized that the Russians aren’t invincible, which is important for other skaters, too.”

Going into the Olympics, Volosozhar/Trankov and Savchenko/Szolkowy are the main rivals for gold. The Germans are the 2010 Olympic bronze medalists, four-time world champions (2008-2009, 2011-2012) and four-time European champions (2007-2009, 2011). It’s a nail-biting thriller every time the two pairs come face to face.

At the same time, the circle of medal contenders is expanding, at least for bronze. A short list would include all the Grand Prix finalists: China’s Pang Qing/Tong Jian and Peng Cheng / Zhang Hao and Canada’s Meagan Duhamel/Eric Radford and Kirsten Moore-Towers / Dylan Moscovitch. It could also include Russians Stolbova/Klimov and Vera Bazarova / Yuri Larionov. Both these pairs, who have followed Volosozhar / Trankov onto the European podium, are also coached by Nina Moser.

“The fans and journalists judge us harshly,” said Trankov, sharing his concerns after the European Championships, “but, you know, we had only three years to get ready for the Olympic Games.

Other people had a lot longer. We even stepped up our training in the beginning.  Now, everything’s getting back to normal but mistakes still happen, what can you do? Perhaps I’ve been too confident, too laid-back but, sometimes, I need to fail in order to turn things around.

This season every outing has been going really well and, to be honest, it’s been stressing me out a bit. I know myself and just didn’t want things to go wrong at the Olympics. And it’s a good thing it happened before the games. I hope I’ve used up all my set number of mistakes and falls.”

Maxim Marinin, the 2006 Olympic Pairs Champion, is also convinced the Russians are their own worst enemies. “If Maxim and Tatyana are skating well, no-one can touch them but if they make a mistake the Germans will be their main challengers. Plus, there are other pairs who are trying to copy them and, as a result, are coming along more quickly than the leaders.”