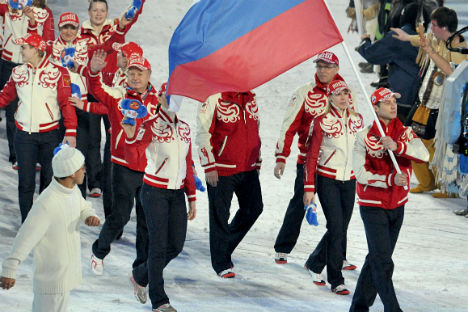 Year in and year out, only Olympic champions were the flag bearers in Russia. Source: RIA Novosti

Once a prestige issue, no leading athlete wants to be the flag-bearer at the opening ceremony. Some athletes will stay in the mountains to avoid jinxing themselves and hockey players will not shave ahead of big matches.

There are just a few hours to go before the Olympic Games opening ceremony in Sochi, but the name of the person who will be entrusted with carrying the Russian team’s flag is still unknown. This is not due merely to an atmosphere of secrecy—for some time this honourable duty has become a bad omen.

Year in and year out, only Olympic champions were the flag bearers in Russia. However, since the late-1980s, they stopped performing well, and this honourable duty joined the ranks of the “bad omens.” World figure skating champion Evgeni Plushenko and speed skater Ivan Skobrev have already declined to carry the Russian flag at the opening ceremonies in Sochi. Their coaches cite the intense physical and emotional burdens on athletes a few days before the competitions start.

Biathlon: Staying in the mountains

Head coach Elena Vyalbe has forbidden the Russian biathlon team from leaving the mountains for the sake of the Olympic opening ceremony. She believes that that the issue is not the drop in pressure and temperature, which would be hard on an athlete’s body, but also the distinct possibility of jinxing themselves. “I am very superstitious and I know that the flag bearer at the opening ceremonies of the Olympics will not win gold,” she said. “You can draw your own conclusions.”

Two-time Olympic biathlon champion Sergei Chepikov, who was Russia’s flag bearer at the 1994 Lillehammer Winter Games, does not share the team’s fears. In an interview with Sport-Express newspaper, he said that for him the strain came not from additional physical activity, but from sports officials. “They were following me and kept saying that they wished me victory. This puts a strain on you in the period leading up to the competition,” he said. In fact, he failed in the first start at those Games, but then won his first Olympic gold medal in the sprint.

Figure Skating: Relying on divine intervention with a cross

Russian figure skaters do not like to discuss their lucky superstitions even after they leave the amateur ranks, as they are afraid of jinxes. However, over the ten-year career of Evgeni Plushenko, who took the gold at the 2006 Turin Olympics, his fans have noticed that the athlete crosses himself on the ice three times before and after skating.

Women singles skaters prefer not to take off their skates after the warm-up that precedes the free skate in order to avoid losing the concentration they need. Many figure skaters try to place their skate guards parallel to each other in the locker room—they say that they will then skate steadily.

World champion pairs skater Maxim Trankov never takes a mobile phone to competitions and is afraid that his mother will show up to cheer him on (his father died last year). “It has been like this with me since I was a child: wherever I was performing, if my parents were there, I didn’t skate well,” he said on the website Tribuna.sports.ru. “But if my girlfriend comes, nothing bad happens. When she’s in the stands, I feel good.”

When they go to competitions, Russian hockey players try not to take women with them. They think doing so will destroy the fighting spirit. The most well-known superstition among hockey players is to not shave during playoffs. In the final stages of a competition, be it the Stanley Cup, Gagarin Cup or Olympic Games, year in and year out the event turns into a battle of the bearded men.

Strangely, it is the hockey players who are willing to rescue the Russian team and carry the flag at the Sochi opening ceremonies. Wingman Ilya Kovalchuk is considered to be a front-runner for the position of flag bearer. He has already supported this initiative and directed remarks toward his teammates: “If you believe in superstitions, you won’t play better.”