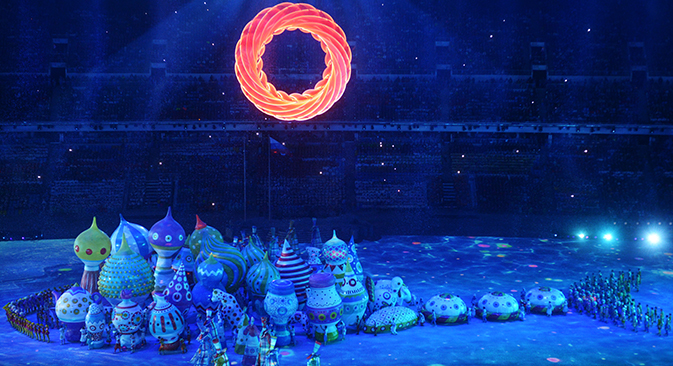 The Sochi Olympics Opening Ceremony took place last night in the Fisht Stadium in front of 40,000 spectators. RBTH asked the organizers and the spectators to share their impressions.

The Opening Ceremony of the 2014 Sochi Winter Olympic Games took place at 20:14 in the Fisht Olympic Stadium. It was witnessed by more than 3 billion viewers worldwide. Details of the show, entitled “Dreams of Russia" were kept a secret until the very last moments, even though Olympic volunteers had seen dress rehearsals throughout the past week. The spectacle involved 12,000 people of 17 nationalities.

"We prepared the ceremony for two years. This was very little time for such a large-scale event .The ceremony was unprecedented from a technical point of view. It involved  a2.5 km-long unique system of moving scenery. This 40,000-seat stadium became a huge theater, like nothing in the world."

"Despite the numerous challenges faced, the technical team has achieved the impossible in bringing the ceremony’s vision to life. With the largest ceremonial aerial delivery system and most innovative ceremonial show deck system, the Sochi 2014 Ceremonies are technically unprecedented."

The Fisht Stadium, named for one of the most famous peaks of the Caucasus mountain range, is impressive not only because of its size, but also because of its unique design. At night, lit with a blue backlight, the building resembles a mountain.

The 40,000 spectators who attended the Opening Ceremonies here witnessed a multimedia show intended to tell the world about Russia – its culture, history, traditions and inhabitants.

"We wanted to tell the story of our great country as it has not been done by anyone. We wanted to make 3 billion viewers see the greatness and diversity of Russia through the eyes of a child - the main heroine of Ceremony, a little girl named Lyuba (Love). The girl became a kind of metaphor for the soul of Russia."

In her travels, the little heroine journeys though many regions of Russia, witnesses major events in the history of Russia and meets with legendary personalities.

Some of her experiences include a troika of huge sparkling horses, an Orthodox Church, the first warships of Peter the Great, the founding of St. Petersburg and the legendary Russian ballet.

She witnesses the Soviet era through the appearance of the famous statue of the Worker and Collective Farm woman. Trains and huge metal structures reminded spectators of the tremendous technological advances in those years.

The Soviet automobile industry, the “stilyagi” dandies of the 50s, the Khrushchev thaw, the song from the movie "Moscow Does Not Believe in Tears" - in short, for a Russian this was something to remember and something that brought an element of nostalgia. But how clear were all these "signs of the times" to foreign visitors?

"The most grandiose introduction was the huge locomotive. The whole episode - extras, light, music - I think it's a symbol of the power of the USSR. Very impressive."

"The domes of Orthodox churches are known all over the world, and when the Russian song [the song "Kostroma” by folk group Ivan Kupala – RBTH] began, I knew instantly - we are really here, in Russia! And then it soared into the sky – an absolute delight!"

"I was expecting something grand - but I just could not have imagined such an incredible show. It’s even difficult to say what I liked most of all ... I think the final fireworks. Actually, my friends are planning to visit the closing ceremony of the Olympics. I hope to see an even more amazing performance then."

Details of the Closing Ceremony of the Games will be kept secret until February 23.