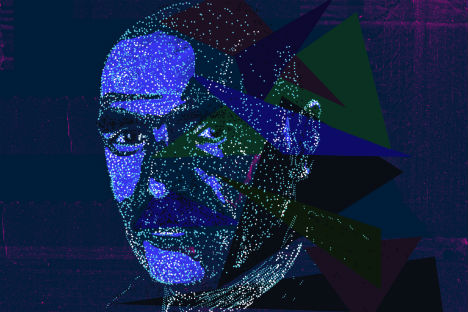 A painting most identified with the Bolshevik revolution was inspired by an exhibit of icons.

Click to enlarge the image of Kuzma Petrov-Vodkin. Drawing by Natalia Mikhaylenko

"Bathing of a Red Horse," the famous painting by Kuzma Petrov-Vodkin (1878-1939) may well be considered to the main painting of the Russian revolution. Petrov-Vodkin himself was an extraordinary character: an adventure seeker, who was fond of experimenting.

His unusual last name attracts attention just on its own. Petrov-Vodkin's grandfather, whose last name was Petrov, was a shoemaker in the Volga River town of Khvalynks and, like practically all shoemakers at the time, he was a heavy drinker.

There is even an expression in Russian: “drunk as a shoemaker.” Petrov drank so much that people in the town where he lived gave him a second last name, Vodkin – a derivative of Vodka.

The story of how Petrov-Vodkin became an artist is no less extraordinary. Young Kuzma decided one day to have a swim in the Volga, but after swimming to the middle of the river, he began to drown. Fortunately, a boatman spotted him from the shore and saved him.

A week later, the boatman himself drowned. Then Petrov-Vodkin took a piece of tin and drew on it a boat, people's heads sticking out of the water, and the sky; and wrote underneath: "In eternal memory." It was his first artistic work.

After finishing his studies, Petrov-Vodkin went abroad, where he reportedly had some unbelievable adventures. For instance, he claimed that once he had been attacked by nomads in the Sahara Desert.

He fired his pistol in the air and whistled like mad. For that the Bedouins called him The Whistler and told everybody in the desert that The Whistler was not to be meddled with, since he was dangerous.

In Rome, supposedly,he was kidnapped by bandits. He later recalled: "I came to somewhere underground, with a gag in my mouth. And I saw three men. I thought to myself: if these are not devils, then they are definitely outlaws. My wallet was missing."

It later turned out that the kidnappers wanted the artist to forge paintings by famous masters, including Leonardo da Vinci.He may have invented everything, but at least they were inspired inventions.

No conflict between Lenin and the Madonna in Petrov-Vodkin's world

Ilya Kabakov: Even in the Soviet era, the West was always present

Kandinsky: Scorn by both the Soviet and Nazi regimes

Petrov-Vodkin found his own inimitable style quite late in life when he had the idea to paint using just three colors: red, yellow and blue. That was how his trademark three-color palette was born.

It was in that palette that he created his most famous work, "Bathing of a Red Horse." It is a stunning painting: unsettling, powerful, mysterious. It seems to be very simple: just a boy and a horse. But what spellbinding intensity these figures project.

That magic was not there from the start. At first it was a realist painting: Petrov-Vodkin painted his nephew sitting on a horse borrowed from a local peasant.

When the picture was nearly finished, Petrov-Vodkin, quite by chance, happened to go to an exhibition of old Russian icons. He was so struck by what he saw at the exhibition that he immediately decided to stylize the "Red Horse" picture as an icon.

The painting immediately developed an extra layer of meaning: it became symbolic and even prophetic. The painting was completed in 1912 – by 1917, red was known as the color of the revolution.

Years later, referring to the painting in the context of the revolution, Petrov-Vodkin remarked: "I see now, this is what I meant!"

Petrov-Vodkin himself was not himself political. He never belonged to any political party and when asked to comment on any political issue, he usually said: "Don't get into that, it's a hell of a mess there."

He wasn’t troubled by the Bolsheviks and even began to cooperate with the new regime after the revolution. He taught at the Arts Academy, worked as a designer for theatre productions, painted pictures.

He saw the revolution as a grand and extremely interesting enterprise.Although he rarely had trouble with the authorities, he was once arrested on suspicion of involvement in a revolt by the Left Socialist Revolutionary Party. He served two days in prison along with another suspect in the same case – the famous poet Aleksandr Blok.

The Bolsheviks considered Petrov-Vodkin was a man from their own class, a shoemaker's son, and the creator of a painting "about proletarian dictatorship." This was the Bolshevik interpretation of "Bathing of a Red Horse": since it was red, it was theirs, of the proletariat.