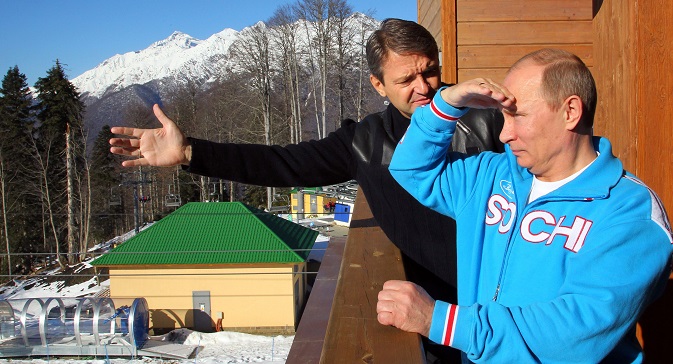 President Vladimir Putin has given personal guarantees that members of the LGBT community who come to Sochi will not be persecuted. Source: Reuters

Foreign visitors to the Olympic Games have no need to fear terrorism, weather and the persecution of gays and lesbians.

The 2014 Winter Olympics were inaugurated in Sochi in a grandiose opening ceremony yesterday. With athletes and tourists already in the city, a very busy atmosphere is expected. It is possible, however, that quite a lot of rooms will stay vacant, partially as a result of a number of myths about the Games being perpetuated in the media. What are these myths? And how well do they correspond to reality?

International media point out that Sochi's proximity to the restive North Caucasus region make it a potential terrorist target. The recent terror attacks on the southern Russian city of Volgograd have given a new boost to these fears.

There is, however, evidence that the threat is being overstated.

Russia, US to join efforts for Sochi-2014 security

To begin with, Sochi does not border the troubled areas. It is located 965 kilometres from Makhachkala, the capital of Dagestan and site of the most violence in the North Caucasus. Sochi is also 643 kilometres from Nalchik, the closest North Caucasus city to the Olympic sites. The distances are roughly equivalent to those between Mumbai and Bangalore and from Delhi to Kanpur.

Second, unprecedented security measures are being taken at the Games. Over 30,000 law enforcement officers are maintaining security with the help of the local Cossack force. Motor vehicles from other Russian regions will be banned from entering Sochi, and all postal parcels arriving in the city will be subjected to inspection.

The total expenses on security are estimated at several billion dollars. Security experts believe that North Caucasus terrorists no longer have enough resources to penetrate such a multilayer security system.

Myth two: There will be no snow in Sochi because the resort city is located in the subtropics

It may not snow often in Sochi, but the Olympic events will be held out of town, in the mountains. There is currently snow at the main Olympic sites. Even if this snow melts by the time the Games open, there is nothing to worry about: Russia has learned the lessons of the snowless Vancouver Olympics, and prepared accordingly.

The overall area of snow thus accumulated amounts to 120,000 square metres; the project cost around $6 million.

The cost of watching the Sochi Olympics in person

Myth three: The Sochi Olympics are nothing but window dressing

Some media reports claim that the Olympics are way over budget due to massive corruption and that the Olympic facilities are not completed. This is not true. The Sochi budget was indeed huge, but not because of corruption (which did take place).

It is simply that new expenses kept cropping up, which is normal for any Olympic Games. The budget of the 1976 Montreal Games originally stood at $124 million, but the final tab came to $2.8 billion.

The Athens Olympics had their budget grow tenfold, from the planned $1.6 billion to $16 billion. The budget of the Beijing Games, originally estimated at $1.6 billion, skyrocketed to $40 billion. The London Olympics were initially expected to cost £2.4 billion but when the bill came it read £10.7 billion.

As for the sports facilities, they have long been completed and tested, as confirmed both by the Russian authorities and by the International Olympic Committee (IOC). Major international events have already been held in many locations around Sochi. There are certain minor things that need improving but all the shortcomings will have been eliminated by the time the Games open.

Myth four: Foreign members of the LGBT community will be subjected to arrests and fines.

It is true that under the new Russian law banning gay propaganda to minors, which has been widely criticized in the West, foreign nationals may be fined between $120 and $150, spend 15 days in detention and then get deported.

Only those who openly advertise homosexuality to children get penalized. Just being gay is not punishable in Russia.

“People have the right to a personal life, and can advertise its advantages and appeal to adults, for as long as they do not advertise them to children,” said First Deputy Prime Minister Dmitry Kozak.

For those who do not take Russian laws for granted, President Vladimir Putin has given personal guarantees that members of the LGBT community who come to Sochi will not be persecuted.

Given the importance of the Games to Russia and to Putin, the president can hardly afford to darken the events by persecution of gays and lesbians.

There is of course a possibility that some of the foreign athletes will stage acts of provocation in support of the Russian LGBT community (as did a Swedish athlete at the Moscow track and field championship, who painted her fingernails in rainbow colours).

Such athletes do not have Putin to fear, but rather IOC functionaries. It is known that athletes may face protracted disqualification for political statements made at Olympic Games.