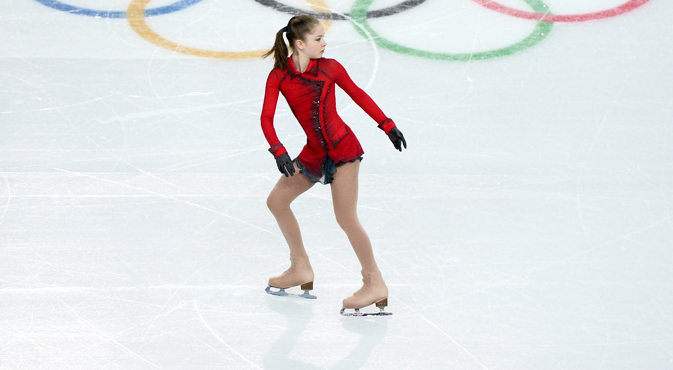 Fifteen year old Yulia Lipnitskaya has become the youngest ever gold medalist at the Winter Olympics and the toast of Russia.

The Russian team figure skating gold medalist Yulia Lipnitskaya has become the youngest ever winner of a Winter Olympics event at an age of 15 years and 249 days.

Previously the record was held by American skater Tara Lipinski, who won a gold medal in 1998 at Nagano aged 15 years and 255 days. Curiously, Lipinski gave an interview to the New York Times on the eve of the Olympic Games, in which she said that Lipnitskaya could win a number of events including the women’s single figure skating competition, in which Russia has never won a gold medal.

Lipnitskaya’s partner, Evgeni Plushenko, who first became a medalist at the figure skating world championships before Lipnitskaya was even born, called her a “little genius.” Meanwhile, Elvis Stojko, a two-time Olympic figure skating silver medalist at Lillehammer and Nagano tweeted “Julia Lipnitskaia can be the new super star. If she can stay in it for years to come, she will inspire many.”

Yulia was born in Yekaterinburg and began figure skating at the age of four. However, her opportunities in her native city were limited, so she moved Moscow in 2009 in order to train with the renowned Eteri Tutberidze. Lipnitskaya recalls that she was ready to quit figure skating if Tutberidze did not accept her as a student. Fortunately, the coach immediately realized that Yulia has incredible potential and took her on.

In the 2011-12 competition, Lipnitskaya won all the junior events she participated in, including the ISU Grand Prix of Figure Skating. The following year she took part in the adult category of the Grand Prix, but was forced to abandon the final round of the competition due to injuries received during a practice session.

In 2012 Lipnitskaya started to experience changes that are common for girls her age, including growth spurts and weight gain.

Lipnitskaya’s first coach Elena Levkovets recalls that the young skater wanted to end her career at that point. “She did not understand what was happening to her, what to do with her arms and legs. She had trouble at practice,” Levkovets said.

Who could have thought that this tiny girl is struggling with her weight? Tutberidze was ceaselessly amazed by the willpower of her student, who got the nickname “little tank” for her toughness. “I have never seen anything like this,” remarked Tutberidze. “She practically can’t eat anything. When she has to lose weight all she eats is powdered nutrients, which give her energy. But she manages, thank God. She is intensely driven.”

Not a day of rest

When we watch Lipnitskaya, it seems that she twirls effortlessly in a standing split, for which she received the highest possible marks. However, all of Lipnitskaya’s accomplishments are the result of extreme hard work.

“If you only knew how much work I have to put into stretching. If I take even a few days off, I will feel like I am made out of wood, my muscles won’t respond at all!” says Yulia.

She is a perfectionist by nature, and is sometimes unsatisfied even with a winning performance. For example, she said that during her second Olympic performance “the jumps were not my own, and the last pirouette could have been done better. I don’t yet know how to forgive myself mistakes, perhaps that will come with experience and I will be able to smile like Carolina Kostner after a fall at the European Championships.”

Tutberidze agrees with her student: “There are some elements that need work. Yulia got nervous toward the middle of her performance, but this is normal, she is human after all. We will learn from her mistakes during this performance and improve her routine.”

The next event for Yulia is the women's singles, which will take place on February 19-20. In order to avoid the euphoria and attention caused by her first gold medal and train productively, Yulia and her coach returned to Moscow on February 10. There she will have an entire ice rink to herself.

The desire to trade the festive atmosphere of Sochi for the silence of a practice rink is understandable. It is good to win medals, but that does not mean that the other world-class competitors have gone home.

Lipnitskaya’s competitors have more experience and trophies. They include 2012 World Champion and five-time European Champion Carolina Kostner of Italy, as well as the 2010 Olympic silver medalist and two-time World Champion Mao Asada of Japan, both of whom have already lost to Russian skaters in the team events. Also contending for gold will be Vancouver gold medalist and two-time World Champion Kim Yuna of Korea and fellow Russian skater Adelina Sotnikova, who shared the podium with Lipnitskaya at the 2014 European Championships.

However, it is unlikely that they will be supported quite as strongly as Lipnitskaya by the fans. “I have been warned many times that the audience will be loud and that I won’t even be able to hear the music, not just during the competition, but also during the warm up,” Yulia says. "In general I was ready for this, but I didn’t think it would be as loud as it was. Thankfully this only spurred me on… The most important thing is that I am well-prepared and comfortable on the ice, which is of excellent quality on this arena. I am just going to try my hardest for now, and I will only feel that I am an Olympic champion once all the competitions are over.”