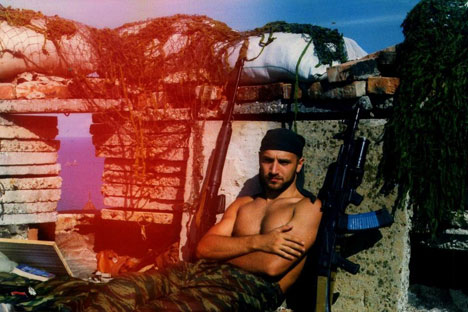 Authors like Mikhail Lermontov have celebrated the ambivalent beauty and bravery of Caucasus for centuries. Prilepin (pictured) is not the exception. Source: press photo / zaharprilepin.ru

RIR presents 5 contemporary authors, each with military experience and individual views on duty, violence and the casualties of war.

Military clashes in the Caucasus during the last two decades have spawned several moving Russian novels and memoirs. Zakhar Prilepin’s 2005 novel “Pathologies” drew on his own experience to depict a terrified, naïve paramilitary commander in Chechnya; German Sadulaev contributed another perspective soon after in his novel “I am a Chechen!” ; Arkady Babchenko’s “One Soldier’s War in Chechnya” depicts a brutal and confusing conflict. His unsparing descriptions of drunken beatings and bullying within the Russian army are particularly harrowing.

From spy tales to fables, a new wave of Russian authors

2013 saw publication in English of Mikail Eldin’s extraordinary new memoir, “The Sky Wept Fire.” Eldin is a Chechen journalist, who joined the fight for independence, was captured and tortured. He charts the very personal journey from young writer to veteran freedom fighter without sentimentality or heroism. “It is only possible to write beautifully about war if you have never witnessed it from within,” he said in the preface; “This is not a seductive story of war for the adventurous or the romantic.”

Captives of the Caucasus

“The Sky Wept Fire” has a haunting and defiant lyricism nonetheless. During the battle of Grozny in 1999, Eldin describes the “bones of ruined buildings” and likens the city to a mortally wounded animal, weeping “tears of smoke.” For Babchenko, the Chechen steppe has absorbed fear “like sweat” … which “hangs over the place like fog,” while Sadulaev’s Chechnya is a romanticized landscape, full of lilac and cherry blossom and flocks of migrating swallows.

Authors like Mikhail Lermontov have celebrated the ambivalent beauty and bravery of this region for centuries. Alexander Pushkin’s narrative poem “The Prisoner of the Caucasus” was inspired by the landscape, which he saw as “a new Parnassus.” Leo Tolstoy’s story of the same name was the basis for a wildly popular 1990s film, directed by Sergei Bodrov.

More recently, Alexey Uchitel’s 2008 movie, “Captive” draws on Vladimir Makanin’s 1990s novella, telling the story of two Russian soldiers gradually bonding with their Chechen prisoner and guide. Makanin’s story begins with a periphrasis from Dostoevsky: “The soldiers probably did not know that beauty will save the world, but … in the mountains they sensed the beauty all too well—it frightened them.”

Babchenko felt compelled to volunteer for further active service in Chechnya, sucked back into the nightmare. In his memoir, conscripts are forced to dig their own graves on “a sunny June day, full of the intoxicating aromas of the steppe, … too beautiful for death.” Elsewhere, his dark humor emphasizes the soldiers’ suffering; the soft pages of a medical dictionary find a new use during an outbreak of dysentery, “the last disease that this fine medical reference book diagnosed,” Babchenko remarked drily.

Across the precipice of fear

The corrosive, galvanizing power of violence is a recurring theme. Babchenko sees war stripping off “everything that’s affected and superficial” to expose “the core, the real you,” but it is also soul-destroying so that “no one returns from the war.” Eldin agreed: “There are no heroes… In war, a man becomes the person he truly is.” Prilepin said: “War … exaggerates the traits a person already has.”

Combining scenes of war with peacetime tales, “Sin” is Prilepin’s only book available so far in English(although “Sankya,” the story of a young revolutionary, is due out in February). Prilepin’s namesake Zakharka in his stories goes through some of the experience the author himself had when he worked as a journalist and a special police squad commander in Chechnya.

Towards the end of “Sin,” Prilepin’s subtle narrative strategy becomes clear; he shows us that life is composed of moments of emotional connection: family love at the dacha, anger outside a nightclub, yearning for home from the front line: “I love my land terribly. I love it horribly and immorally, not regretting anything… But what is spreading out under my feet – is that my land?” In a prose-poem from the penultimate chapter, the narrator obsessively returns to this idea: “My Dostoevsky homeland… Fierce dogs have torn your guts out” or “Hello motherland! We are your herd. We are your cattle and your flock.”

Babchenko also describes the soldiers as animals “herded into this war and killed by the hundred.” He emphasizes the lost youth and innocence of the conscripts “because to die at the age of eighteen is a terrifying prospect.” German Sadulaev’s fragmented meditation has a simple message: “We have to conquer evil, to rise above hatred.”

Eldin steps back occasionally from “human bodies ripped apart” or feral dogs feeding on fresh corpses to reflect on the struggle “to remain a human being.” When Eldin writes about torture, during an almost-unreadable section called “From the Wheel of Time into the Circle of Pain,” full of needles under fingernails and nights of recorded screaming, he switches to the second person. This forces the reader to share his experiences, both physical (“Naked wires are attached to your fingers and toes”) and psychological (“Here begins your tightrope journey across the precipice”).

Anna Gunin who also translated “I am a Chechen!” worked from an unedited, unpublished manuscript of “The Sky Wept Fire.” She told RIR: “I think the more fresh and original a work is, the more you have to rely on creative inspiration to translate it. “The Sky Wept Fire” was hugely difficult to translate, but also immensely rewarding.”

Despite the horrors they have seen, these writers are determined to struggle with language and describe the indescribable. Babchenko describes returning soldiers for whom “there were no voices of authority, and there was no God” while Sadulaev concludes that “if there is a Heaven, there is no short cut.”

Tolstoy’s “Hadji Murad” began and ended with the image of a crimson thistle, crushed by a cartwheel but “risen again,” refusing to surrender. Russia’s contemporary writers continue this tradition of resistance and survival, from Makanin’s mountainous meditations to Prilepin’s attempts to redefine his homeland. Literature becomes an essential record and memorial. It serves to mourn the dead and tell their stories, to acknowledge complexity and to explore the desperate limits of humanity.