Developing a deeper taste for Russian classical music in India 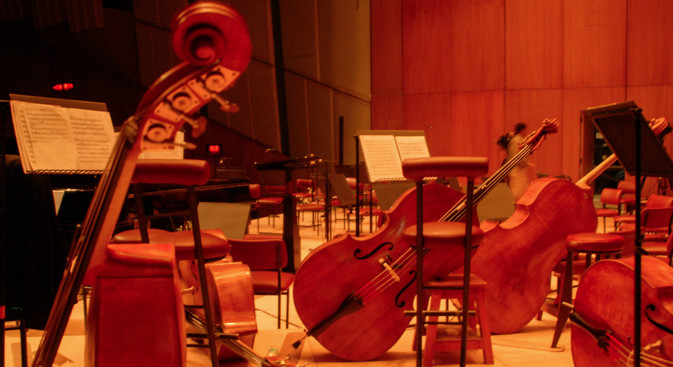 Opportunities to promote ballet, opera and other western classical genres in India are often limited by the infrastructure, in particular suitable concert halls. Source: Alexandra Katz

Among the niche urban audience for Western classical culture, there is an ample demand for Russian ballet, opera and symphonic music in India. However for elite Russian performers and groups to visit the country, corporate sponsorship is a must.

This week’s opening of ‘Feodor Chaliapin: Pages of My Life,’ a photo exhibition celebrating the 140th birth anniversary of Russia’s greatest  opera singer at Mumbai’s National Centre for the Performing Arts (NCPA) set a new tone for discovering the various facets of Russian culture.

The exhibition organized by the Russian Centre of Science and Culture (RCSC ) Mumbai and NCPA introduced the Indian public  to the great artist’s correspondence with friends and relatives during his endless tours around the world. It also marked the opening of the new season of the Symphony Orchestra of India (SOI) at the NCPA featuring the pieces of some of Russia’s greatest composers such as Tchaikovsky, Prokofiev and Shostakovich.

SOI has a very broad connection with Russian culture and this goes beyond its repertoire. The majority of the orchestra’s musicians today are from Russia, Kazakhstan, Belarus and other post-Soviet countries. While most of musicians come to India just for a season, which is traditionally between September and February, about ten of them are working in India permanently teaching children to play the violin and cello. The music school established at the NCPA a few years ago is based on the Russian string section school.

Russian culture in its various formats has been promoted by the Rossotrudnichestvo mission represented in India by the RCSCs in New Delhi, Mumbai, Kolkata, Chennai and Trivandrum for decades.

Folk and modern dance being the unique language understandable by people of various cultures and languages is so far the most popular format of Russian culture in India. “Wherever in India you go, dance is understood by everyone. That’s why dance particularly has great perspective sin India,” Vladimir Dementiev, head of RCSC Mumbai says.

However, the classical genres, be it symphonic orchestra, opera or ballet performance, even jazz reach out to an elite audience concentrated in the metro cities. “The Mumbai audience is quite special, in large part due to the Parsi community who inherited traditions of home musical education and concerts from the British,” says Dementiev. “It is a small community but with traditionally strong taste for ‘high quality’ classical music.”

Khushroo N. Suntook, NCPA Chairman and SOI Founder, admits that Parsis along with small number of European expats remain the largest part of the centre’s western music programs audience which, although, has been increasing with more of youngsters coming in.

Experts note that the opportunities to promote ballet, opera and other western classical genres in India are often limited by the infrastructure, in particular suitable concert halls. Most experts admit it is only Mumbai’s NCPA stage that is satisfying the requirements of professional musicians or ballet dancers.

According to Suntook, NCPA has been in talks with Moscow-based “Harmony for peace” charity fund associated with International Association of Peace Foundations (IAPF) chaired by seven-time World Chess Champion World Champion Anatoly Karpov about bringing Moscow's Bolshoi Theater to India. Elmira Scherbakova, the President of the fund, visited Mumbai in December last year.  The fund’s spokesperson confirmed that such an idea is being discussed   but has not yet shaped into a concrete project.  The fund is famous for organizing charity concerts of Russia’s most prominent artists like Yuri Bashmet, Konstantin Khabensky, Igor Butman and others.

NCPA has been organizing ballet and opera screenings for past several years. “They are very popular, the house is always full and you cannot get tickets sometimes,” Dementiev says.

Chances of a live performance of the greatest Russian ballet in India are very slim. Although the soloists of Bolshoi, Mariinsky and Mikhailovsky theatres performed in India during the festival of Russian culture in 2012 organized by ICCR and the Russian Ministry of Foreign Affairs, bringing famous ballet companies to India is still a dream of many.

“After we have seen the performance of Russian ballet here in Mumbai we understood we must go to Russia,” says Dr. Nawaz Mody, a frequent visitor of NCPA Western classics programs. “We went the same year, we saw the ballet, we visited Hermitage, it was amazing. People out here may not even know that such beauty exists in Russia.”

The diplomatic resources available to RCSC allow inviting prominent Russian artists at lesser costs as all the events organized by RCSC are non-commercial. However, Fyodor Rozovsky admits, even with such resources at place it is still difficult to bring large formats to India as many expenses apart from fees have to be sources from sponsors. “In India, sponsorship for the sake of brand awareness is not very common. Here such sponsorship is considered as investment, and the sponsors are expecting to return the money along with profits,” Rozovsky adds.

Pavel Ovsienko, representative Office of Vnesheconombank in India, notes that even the elite audience in India interested in high quality classics is not ready to pay the price that would make such projects commercially attractive. “Inviting a big orchestra or large ballet group in India cannot bring profits. You might try covering your primary expenses, but won’t get any profit. To have full house the ticket cost cannot be more than $80 for VIP-sector and $30 for a general seat,” he adds.

NCPA chairman agrees that bringing artists of the level of Bolshoi or Mariinsky ballet is too expensive and cannot be monetized even if it is a commercial project with tickets being sold. The cost that Indian audience is ready to pay is less than any European standard. “Our top priced ticket at NCPA is of about Rs. 3000- 4000 which is around GBP 30. For example, for Faust premiere at The Royal Opera in London this April the ticket price starts from GBP 600,” Suntook says.

He adds that potential of Jamshed Bhabha Theatre with its large stage and orchestra pit to accommodate full-scale operas or ballet, and fact that NCPA now has its own professional orchestra whose quality can be compared even with Boshoi’s orchestra allows inviting only ballet companies, soloists, singers which brings down the cost significantly.

NCPA did its own opera production of Madama Butterfly, Tosca, Cavelleria Rusticana and Palliaci. The average cost of one SOI season, according to NCPA Chairman, is around $1 million while the in-house opera production costs at least half a million dollars. The entire funding comes from Indian corporate sector.

Fyodor Rozovsky says the main sponsors of Russian cultural events in India are currently AFK Sistema represented in India by MTS telecom operator, few tourist companies such as Salvia Travels and Dimaz Group. Yet, the list of existing and even potential sponsors is very short.

A businessman working with one of the Russia’s largest companies represented in India who didn’t want to be named said out of all Russian companies working in India it is only MTS who would be interested in sponsoring cultural events as it is the only company having retail business.

The growing Russian expat community in India as well some non-government organizations are picking up the trend of bringing up new formats of Russian culture to India. However,  the controversy over Indo-Russian Great Live Music festival that was cancelled in Goa minutes before it was supposed to start earlier in February makes the potential of such initiatives quite doubtful.

Vladimir Dementiev adds that large Indian corporations have the resources to bring Russian ballet and opera starts and some of them had even inquired earlier. Dementiev believes that the growth of Indo-Russian bilateral trade is a key to broader cultural cooperation as more financial resources will allow more opportunities to bring big names to India.