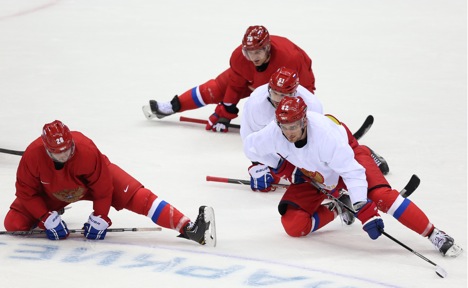 To win gold, it would seem that Russia needs to rely on teamwork, as well as the individual skills of players like Ovechkin, Datsyuk, Malkin, Semin, Kovalchuk, and Radulov. Source: Itar-Tass

Russia’s winning tradition and recent lack of success in ice hockey can be compared with India’s story in field hockey in the summer games. In Sochi, the Russian side looks to win its first gold since 1992.

Almost fifty percent of Russia’s population will tune in to watch ice hockey during the Olympic Games in Sochi. In terms of popularity, the only other winter sport to come anywhere close is the biathlon (43 percent). A medal in the hockey will certainly outweigh any other for Russia.

Russia has always held the sport in special reverence. The Soviet national team competed in its first Winter Olympics in 1956, in Cortina d'Ampezzo, Italy – and returned home gold medal winners. Ever since, for Russia there has always been a tacit rule at the Winter Games: lose whatever you like, but not the hockey. Indeed, the success of the entire Olympic team is defined by what happens in the hockey arena.

Whereas the USSR’s “Red Machine” churned out Olympic triumphs with alarming (for the rest of the world) regularity, its successor has delighted fans only once: In 1992 at the Winter Olympics in Albertville, when, just a few weeks after the collapse of the Soviet Union, it competed under the flag of the “Unified Team” (consisting of six former Soviet republics). Strictly speaking, the Russian team made its official tournament debut after the Olympics, at the 1992 World Championships, reaching the quarterfinals. Then in 1994, at the Olympic Games in Lillehammer, for the first time in history the Soviet/Russian team failed to win a medal, finishing fourth. That flop marked the end of legendary coach Viktor Tikhonov’s reign. But since his departure Russia has consistently failed to win the ultimate prize.

In 1998, Vladimir Yurzinov’s team got to the final, where they were stumped by the brilliance of Czech goaltender Dominik Hasek. Silver in Nagano four years later was followed by a disappointing bronze in Salt Lake City. The path of Vyacheslav Fetisov’s men to the final was blocked by Team USA, led by Herb Brooks. Exactly 22 years on, the architect of the famous “Miracle on Ice,” when a group of amateurs and collegiate players deprived the mighty Soviets of gold at the 1980 Olympics, again brought the “Red Machine” to a halt. The mood of Fetisov and co was lifted slightly by victory over the Belarusians in the “consolation final.”

That is where the list of Russian Olympic prizes comes to an end. In Turin 2006, the team picked up the “wooden medal” (as fourth place is known in Russia), while in Vancouver 2010 a star-studded unit under Vyacheslav Bykov crashed and burned in the quarters, going down 3:7 to Canada. It could have been even worse had the Canadians, already sure of the result, not taken their foot off the gas.

The Utah fiasco caused a lot of soul-searching and forced Russia’s hockey authorities to take a fresh look at the system of team formation, and the coaching staff was significantly expanded. Although in Vancouver, Vyacheslav Bykov and his ambitious assistant Igor Zaharkin had wielded essentially unlimited power, the team did not even have a goalkeeping coach. That job was formally assigned to the president of the Russian Hockey Federation, Vladislav Tretyak, but he spent most of his time observing from the stands and sounding off to reporters. There was also no general manager per se, and no one to keep an eye on the NHL players during the regular season, since Bykov and Zaharkin were busy coaching Ufa-based Salavat Yulaev in the KHL.

The arrival of head coach Zinetula Bilyaletdinov saw the adoption of a more serious approach, yet it still failed to deliver a result. At the 2013 World Championship, again in the quarterfinals, Bilyaletdinov’s team was blitzed 3:8 by the U.S., who weren’t even the dominant force in the competition. And Russia’s players looked unimpressive during the season’s Euro Hockey Tour (EHT), contriving to lose two games at home in December — at the Bolshoi Olympic arena in Sochi, no less.

Betting on the NHL

This disastrous “dress rehearsal” enraged Bilyaletdinov. Whereas it had been assumed that the team in Sochi would be split roughly equally between the KHL and the NHL, post-EHT the head coach stated that he had lost confidence in some KHLers, and that he would henceforth count on the squad’s NHL representatives. As a result, the roster of 25 names featured only nine home-based players. Of these, third-choice goalie Alexander Eremenko appears the only one destined to remain sidelined. In defense, the picture is revealing: two “homies” against six “Americans.” And among the forwards, only former NHLers Radulov and Kovalchuk can count on getting serious game time. The rest make up the third and fourth tiers, whose task, as conceived by Bilyaletdinov, will be to man the fort while the leaders are taking a breather.

Experts unanimously describe the Russian team as "optimal.” Unlike Canada, the U.S., and Sweden, who have enough good players for two or three teams, Bilyaletdinov’s choice is limited. Only the goaltending lineup looks impeccable. Semyon Varlamov, despite the scandal of being involved in a trial after allegedly assaulting girlfriend Yevgenia Vavrinyuk, has had a great season. And Bobrovsky, winner of the 2013 Vezina Trophy, has hit top form. But the biggest long-standing problem — central attack — remains unresolved. Yevgeny Malkin and Pavel Datsyuk are simply irreplaceable, and coaches and fans alike can only pray the pair are still in good shape at the business end of the tournament. Defense also looks vulnerable. That 39-year-old Sergei Gonchar was until very recently vying for a ticket to Sochi speaks volumes. Of those who made the cut, only Yemelin, Voinov and Markov have pedigree.

To win gold, it would seem that Russia needs to rely on teamwork, as well as the individual skills of players like Ovechkin, Datsyuk, Malkin, Semin, Kovalchuk, and Radulov.

“One man in the field is not a warrior. There must be a team. We must be united and pull in the same direction. It requires internal discipline. We must ensure that the team is a single unit,” said Zinetula Bilyaletdinov in an interview with RIA Novosti.

It is clear that the Russian team will be among the favorites in Sochi. And fans expect nothing less than gold. But those close to the team are refraining from bold statements.

“The most important thing is for no one to accuse the team of displaying weakness, being underprepared, or showing disrespect to opponents. We have no doubt whatsoever that every player will give 100 percent. They are all professionals and understand where they are going,” said Vladislav Tretyak.

There is also a distinct lack of histrionics in the statements made by the players: “Let people think we’re the fourth-best team — that takes the pressure off. We’re quietly concentrating on our own game... Yes, on paper the U.S. looks stronger than Russia, but paper can be torn up. I believe that we will stand our ground against the Americans and Canadians. We have a strong team, the guys are more experienced now,” reasoned Yevgeny Malkin in an interview with RIA Novosti.

His colleague Alexander Ovechkin agrees that there is no need to feel daunted by the names on the Canadian, U.S., and Swedish team sheets.

“What’s to be afraid of? Names? On the ice is where it matters. I think everything will be just fine,” Ovechkin told Rossiyskaya Gazeta. “We have a combat-ready outfit. The most important thing is to play as a team. The goal is first place. We will aim for that. It will be hard, but we’ll keep moving towards the target.”