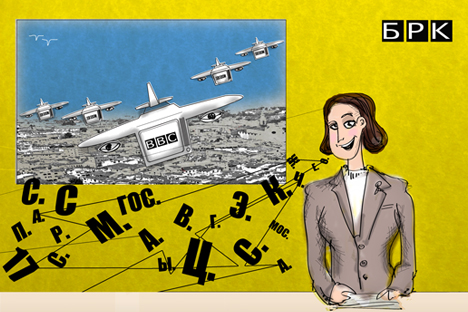 As is the case with other languages, Russian has long made use of acronyms. They are particularly common when it comes to ideology and it is virtually impossible to discuss the Russian political system without using them.

Immediately following the revolution of 1917, Russia ceased to be called Russia, and was renamed to the RSFSR or Russian Soviet Federative Socialist Republic. However, Russian émigrés refused to accept this change and mockingly referred to it as Sovdepia, a combination of the words Deputy and Soviet, which alluded to the governing body of the RSFSR, the Soviet [or Council] of Deputies. After the establishment of Soviet rule in the Caucasus and Central Asia, several other republics were added to the RSFSR, and the country became known as the USSR, or Union of Soviet Socialist Republics. This name was used until 1991 when the USSR broke up into fifteen independent states.

How to address someone in Russian

Following the dissolution of the USSR, Russia once again took on its traditional name. However, the term Russian Federation or RF is also considered acceptable.

The former Soviet states also periodically form various alliances known under other acronyms; these include the CIS (Commonwealth of Independent States) and the recently founded EAEC (Eurasian Economic Community).

Some international acronyms are used in Russian without translation; examples include NATO and the BBC, which if translated into Russian would be abbreviated as BRK. Curiously, if the abbreviation BBC is read in Cyrillic, it becomes an acronym used to refer to the Russian Air Force.

Acronyms are also traditionally used to refer to political parties. The USSR had only one political party, the CPSU, or the Communist Party of the Soviet Union. However, until the early 1950s, it was called the AUCP(B), or All-Union Communist Party (Bolsheviks). The first “alternative” political party during the Perestroika years was the LDPR or the Liberal Democratic Party of Russia, while one of the modern political parties, the People’s Freedom Party, is known for its Russian syllabic abbreviation PARNAS.

In 1917, the All-Russian Emergency Commission for Combating Counter-Revolution and Sabotage, abbreviated as the VChK or simply ChK, was formed. Its workers soon became known as “chekists” after the abbreviated title of the commission. Subsequently this oppressive agency was renamed multiple times, and was known as the NKVD (People’s Commissariat of Internal Affairs), MGB (Ministry for State Security), and most famously the KGB (Committee for State Security). In modern Russia, the FSB (Federal Security Service) has taken on the KGB’s responsibilities. Interestingly, almost a century later, FSB officers are sometimes still referred to as “chekists.”

Following the publication of Alexander Solzhenitsyn’s Gulag Archipelago in the 1970s, the acronym GULAG (Main Camp Administration) became known the world over. We must note that only the first three letters of this acronym stand for abbreviated words; the last three letters are actually all part of the abbreviation for the Russian word “camp.” Another acronym which became well-known at that time was “zek”, which is short for the Russian word for “inmate” and was used to describe people serving time in the camps. Meanwhile, the main Soviet counterintelligence force during WWII was named SMERSH, a syllabic of abbreviation of the Russian phrase “death to spies.”

The name of another subway station, meanwhile, has undergone a paradoxical metamorphosis. In 1939 the All-Union Agricultural Expo Centre or VSKhV was opened in northern Moscow, and when the subway line was extended there in the 1950s, the nearest station was given the same name. Shortly afterwards the expo centre and the subway station were renamed to the Exhibition Centre of the Achievements of the National Economy or VDNKh. After the collapse of the USSR the centre no longer served an ideological purpose and became a regular trade centrе named the All-Russia Exhibition Centre or “VVTs”. However, the station was not renamed, and over time its name became synonymous with the surrounding city district. Consequently, in order to get to “VVTs you must first go to the VDNKh.