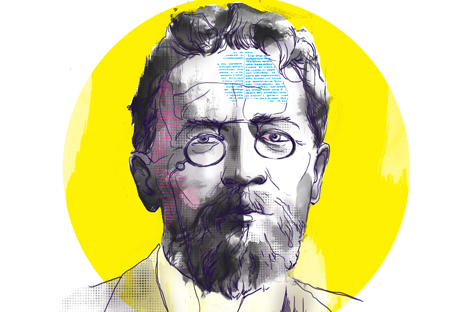 The great Russian writer Anton Chekhov (1860-1904) desperately needed money all his life. But maybe his constant need for work was what produced many of his greatest masterpieces.

Chekhov had an exclusive deal with the publisher Adolf Marx, who owned the rights to all the writer’s works – present and future.

The value of the contact was 75,000 roubles –a small fortune at the time, but Marx paid the sum in small installments, in return for new manuscripts. Nevertheless, Chekhov bought a small house in Yalta with money from this contract.

However, Chekhov found a way around the terms of the agreement – the contract didn’t cover plays. The Cherry Orchard was published by Marx, but royalties for the stage version went to the writer. It is no coincidence that more than half of Chekhov’s stage plays were written after he signed the contract with Marx – including Three Sisters, and no fewer than 10 short plays.

However, in becoming a playwright, Chekhov traded one set of problems for another – haggling with a publisher for money turned into haggling with directors over staging. For example, Chekhov arrived at one rehearsal of The Seagull at the Moscow Art Theatre to hear frogs croaking, dogs barking, and dragonflies buzzing behind the stage. When he asked what the purpose of this menagerie was, the director said: “We are trying to make it all look more real.”

In reply, Chekhov delivered an impromptu lecture about art. “There is this great painting by Kramskoi,” he told the troupe. “It captures human faces very well. What if we cut out the painted nose on one of the faces, and poke a real nose out of the hole? What do you think? The nose will look very real! The painting itself would be utterly ruined, of course… The theater stage depicts the quintessence of life. Please don’t put any extraneous elements there.”

Although Chekhov spent his entire life looking for money, he was never short of ideas. He could produce a captivating story out of everyday situations. His works did not push a specific ideology, which was contrary to fashion of the time.

This is how a contemporary recalled one conversation between Chekhov and his students:

“You cannot be a writer unless you have convictions!” said one of the students.

“I'm afraid I do not have convictions,” Chekhov replied.

“Then who needs your stories? What are they for?” the student argued. “There is no opposition in them, no ideas. It's just entertainment, that's all!”

Chekhov never regarded himself as a great writer. He described his own occupation as a writer of “current literature” - something that is read today, but will be completely forgotten tomorrow.

“You know how long they will keep reading my books?” Chekhov once asked fellow writer Ivan Bunin.

Bunin then said: “No, no. Poetry lives on for much longer than that.”

At this point, the characteristically calm Chekhov reportedly became very angry. “The only people they regard as poets, my dear sir,” he said, all but shouting, “are those who use the words "silvery yonder," “accord,” and “to arms, to arms, let's fight the darkness!”

Chekhov never played the genius. He merely aimed to produce a solid, well-made and well-polished product. The rest was the “silvery yonder” he so despised. And the natural result of delivering a well-made product is money and creature comforts.

This is how one of Chekhov's friends recalled a typical episode in his memoirs: “The inn was dirty and cheap; it opened up very early for the cab drivers doing the night shift. ‘That’s good,’ Chekhov said as we walked in. ‘If we write good stuff, there will be plenty of good restaurants in our lives. For now, this place is all we deserve, so it will do very nicely.’”

Chekhov never seemed to aspire to much more than good restaurants. But Marx made a good bet when he bought the rights to all of Chekhov's future writings. Shortly before his death Chekhov showed his notebook to Nikolai Garin-Mikhaylovsky, a fellow writer. “I have about five hundred pages here of unused material,” Chekhov said. “This is enough to keep me writing for another five years. If I can turn it all into books and plays, my family will be left well provided.”

Some new Chekhovian texts continue to materialize to this day, 100 years after Chekhov's death.

Chekhov’s dacha in the Crimea has now been turned into a museum. The writer’s own desk there, and his own quill. An explanatory note printed on a typewriter greets the visitors. This is where Chekhov lived and worked," the note reads. “Let us always remember him,” it goes on, at some length. And then at the very end, “Read Chekhov, and be healthy!”

That’s something Chekhov himself could have written in one of his stories. That’s exactly his kind of humour.