UK-Russia Year of Culture: A chance to reset relations 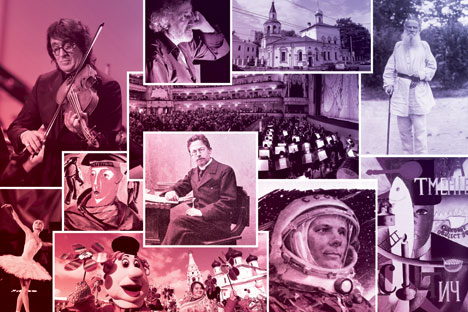 The Year of Culture will see the largest ever British cultural programme take place across Russia. In return, Russian projects will be hosted across the UK. Source: ITAR-TASS; RIA Novosti; Legion Media

After years of rocky relations Russia and the UK have finally found a new platform for dialogue through culture in 2014.

This is a big year for Russia on the international stage. Not only is the country playing host to the Winter Olympic Games in Sochi, but this month also marks the start of the UK-Russia Year of Culture. The year officially begins on Feb. 24 with an event at the House of Commons, hosted by the Russian Ambassador and MPs, followed by a concert at the Royal Festival Hall with the Tchaikovsky Symphony Orchestra.

The year-long programme has been devised to act as a platform for cultural exchange and dialogue. Impetus has come from the highest political levels, with UK Foreign Secretary William Hague and Russia’s Foreign Minister Sergei Lavrov signing a joint statement. Both nations have a rich cultural history so it is fitting that they will collaborate by celebrating and showcasing respectively their country’s unique heritage.

Relations between Russia and the UK have suffered setbacks in recent years. The last decade has seen accusations of espionage, the expulsion of diplomats, and the highly charged case involving the death of Alexander Litvinenko. These have all contributed to a frosty diplomatic climate and the year of culture is seen as an opportunity to start afresh and to develop a foundation for future collaboration.

The year will see the largest ever British cultural programme take place across Russia. In return, Russian projects will be hosted across the UK. More than 250 events have been planned in the visual arts, science, education and sport in both countries. With exhibitions, classical concerts, theatre performances, literary festivals, film screenings and educational programmes also scheduled, Russian culture will truly make its mark in 2014.

The British Council has organised the British side of the programme and plan to send some of our greatest cultural icons to Russia. The Council’s Director Paul de Quincey says: “Most events - both in Russia and the UK - will stand on their own as examples of the very best of what each country has to offer; but equally important is what we are able to do together.”

Major museums and institutions will host film screenings of Hitchcock’s early silent works, an exhibition of designs for the iconic James Bond films, and performances of Shakespeare. The Young British Artists will be represented in the first major retrospective of their work in Russia, followed by an exhibition of Wedgwood pottery, and performances by the London Philharmonic Orchestra and Northern Ireland Opera.

The start of the year in Moscow opens with a video installation, The Golden Age of the Russian Avant-Garde, curated by film director Peter Greenaway. The exhibition consists of animations of 400 masterpieces of the Russian avant-garde to tell the story of this groundbreaking period of Russian art history. The show will take place in Moscow’s Central Manege Exhibition Hall before moving to the UK.

The British public will also be treated to a number of high profile events organised by the Russian Foreign Ministry. Russian music will grace our concert halls with performances by the Russian Philharmonic Orchestra and the Sretensky Monastery Choir. The latter will perform a range of spiritual and traditional Russian songs at Kensington Palace in March.

Russia’s seminal role in space exploration will be celebrated at the Science Museum with an exhibition featuring rare artefacts. Highlights include the suit worn by space-dogs Belka and Strelka, the first dogs to orbit the Earth and return safely.

Can culture heal relations between Russia and Britain?

The curator Doug Millard explains: “Cosmonauts is set to open in November 2014 and will be the headline attraction of events in the UK this year to celebrate the UK-Russia Year of Culture. Our exhibition will explore the remarkable stories of Russian scientific and technological ingenuity that launched the space age.”

Visual art will play a crucial role in the UK during the cross-cultural year. An undoubted highlight will be the major retrospective of the radical artist Kazimir Malevich at Tate Modern from July. The first of its kind for 25 years, this will be a remarkable showcase of Malevich’s career in its entirety including the famous Black Square.

“It will be the first comprehensive retrospective of the artist tracing the major developments of his career through to his late production of figurative works.” curator Iria Candera says. “The exhibition offers an unprecedented overview of Malevich’s oeuvre including works from different stylistic periods in a wide range of media, including paintings, drawings, designs and sculptures.”

The Victoria and Albert Museum will provide an insight into Russian avant-garde theatre with an exhibition featuring more than 200 objects including drawings, costumes and photographs. In addition, Russian Art Week in June will provide Londoners with Russian art auctions.

More about UK-Russia Year of Culture

Numerous other exhibitions will be held throughout the year at London’s Russian galleries. Nonna Materkova at Calvert 22 says: “Kate Bush, former head of art at the Barbican, is curating our summer exhibition, a fascinating insight into Russia past and present though photography, linking historical images from the pioneers of colour photography in the early 20th Century to the most talented photographers working in Russia today.”

The unprecedented scale of the programme demonstrates how seriously each government is taking the UK-Russia Year of Culture. What ultimately will make it a success are the personal relationships built between individuals and institutions. From museum curators to theatre directors, ballet stars to musicians, 2014 is a chance for the best of British creative talent to work alongside Russian colleagues and for the British to find out how astonishing and rich Russian culture is.