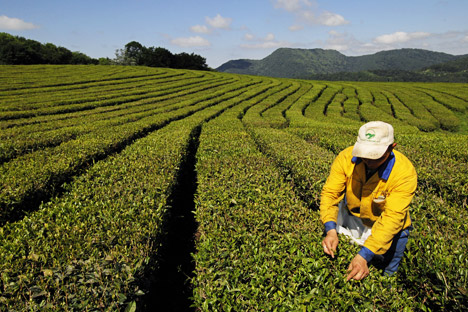 Krasnodar's are the oldest tea plants in Russia, and the older the plant, the better the tea it produces. Source: Mikhail Mordasov / RIA Novosti

The unique Krasnodar tea blend, which is little known even to true connoisseurs of the drink, has an amazing history.

Guests to the Sochi Games are probably aware of the region’s unique cuisine, given its long history as a port and its proximity to Georgia. But less well known is the area’s unique Krasnodar tea blend. This 150-year-old tea possesses strong healing properties, and its exquisite aroma resembles that of China's elite Lansing teas.

In the 18th century, the Russian and British empires together held a monopoly on the global tea trade. At the time, there were two ways to get to China, the homeland of tea. The sea trade routes passed through British-controlled Nanking, while the overland route, through Kyakhta, led to Russia. Russian tea merchants did not fear competition from the British.

They considered the tea that arrived in Russia far superior to that the British consumed because of the form of transportation. The heat and humidity of the southern seas, which tea clippers would take weeks to cross, ruined the delicate tea leaves.

By contrast, overland transportation only improved tea's qualities. True connoisseurs would pay a higher price for products offered by the Russian importers.

When the British started cultivating tea in India and Ceylon (Sri Lanka), the Russians, too, decided to expand their production base. The first attempts to acclimatize tea plants in what was then the southern outskirt of the Russian Empire, in Georgia and Azerbaijan, were made in the 19th century.

The experiment proved a success: the Russian tea plantations yielded their first crops in the early 20th century, although the quality of the local tea blends left much to be desired. The local soils were too inferior to hope for anything better. The only advantage of the Georgian and Azeri teas was their relative cheapness.

Then Judas Koshman entered the scene. A mysterious figure whose early life remains largely unknown, Koshman is believed to have come from a small Jewish settlement in Ukraine to earn his keep working tea plantations in Georgia.  In the early 20th century, when he was already 60 years old, Koshman found himself in the tiny mountainous settlement of Solokhaul near Sochi. 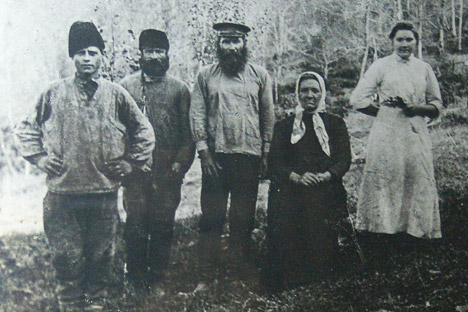 He used the money saved from working on a tea plantation in Georgia to buy a small plot of land. Koshman and his family started acclimatizing tea plants brought from Georgia. Koshman’s neighbors questioned his endeavor.

In the 1870s, agriculturists had shown that the North Caucasus was too cold for growing tea.

However, it took the tea plants introduced from Georgia just four years to take root to such an extent that they no longer needed to be wrapped for the winter, even though temperatures in Solokhaul may drop to 10 degrees Farenheit in January.

Ten years later, in 1913, the Koshmans celebrated their first yield of tea. What later became known as the Krasnodar tea blend (after the name of the region – Krasnodar Territory) has the sweetness, beautiful dark-amber tint and flowery aroma of the best Chinese Lansing teas.

The harsh North Caucasus climate may affect the size of the crop, but it is thanks to the climate that the local tea contains more healthful substances than the Chinese equivalents.

Recognition did not come easily to Koshman. In his modest house, which has been turned into a museum, there is a vast collection of non-committal replies from the Russian Academy of Sciences: St. Petersburg scholars dismissed Koshman's reports on the Krasnodar tea blend as hoaxes, while the Georgian tea lobby set the police on their potential rival. 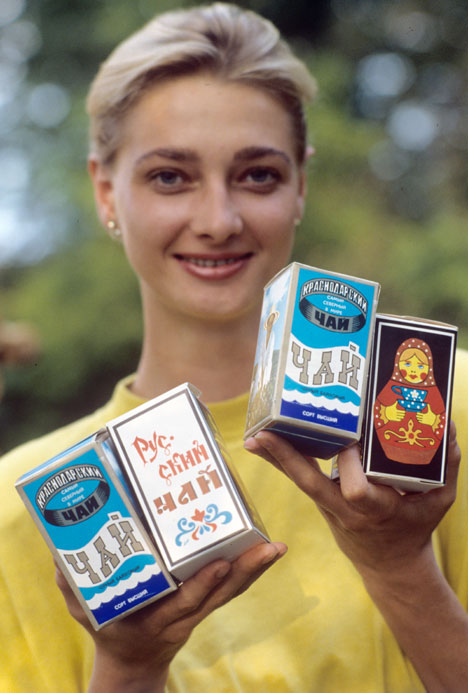 Krasnodar tea: A brand with a century history. The photo was taken in 1991. Souce: Vladimir Perventsev / RIA Novosti

Koshman's wife had to bail him out of prison at one point. It was not until the Soviet era, when Koshman was already over 70, that he received a gold medal at an agricultural exhibition.

The hand-picked Koshman House tea is a truly exclusive product. Koshman's are the oldest tea plants in Russia, and the older the plant, the better the tea it produces. Koshman's teas eventually spread across the mountainous area of greater Sochi in the 20th century.

Krasnodar teas were on sale in the Soviet era, but they did not enjoy any particular popularity because the tea leaves were picked mechanically, robbing the tea of its unique properties.

Even during Perestroika, when the once-gigantic Koshman plantation fell into decay, the Krasnodar tea blend retained its reputation as a unique hand-picked product, and continued to be manufactured in small batches.

It remained the northernmost tea in the world until 2012, when the U.K. gathered its first locally grown crops.