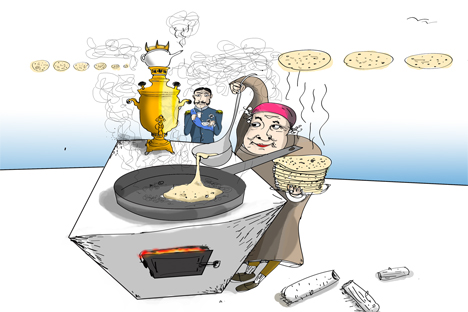 In this sequel of popular Russian words, Alexey Mikheev responds to suggestions from RIR’s international readers

Following the publication of my earlier piece 10 most well-known Russian words, readers have responded with suggestions of more Russian words that have become known and used internationally. So in response to these requests I have written about them too.

In Russian, babushka has two meanings: a grandmother and an old woman in general. The image that comes to a Russian's mind when they hear the word babushka is usually of a bespectacled elderly lady, sitting in a cozy armchair and knitting socks for her beloved grandchildren.

Babushkas are also fond of sitting on a bench outside their apartment blocks and discussing with other babushkas all sort of issues, from global politics to neighbours' domestic rows. In English, the word babushka also means a headscarf tied under the chin, as once worn by Russian peasant women. The word also features in the name of a singing collective from the Russian Republic of Udmurtia, Buranovskiye Babushki, who stormed the 2012 Eurovision Song Contest, finishing in second place. Four of the six singing "grannies" were over 70 at the time.

The balalaika is a Russian folk musical instrument similar to a banjo, except that it has a triangular body and only three strings. The instrument is considered to be one of Russia's traditional symbols, although in fact it is first mentioned in written records only in the 17th century. In the 18th and 19th centuries, the balalaika was indeed the most popular musical instrument in villages across the country, however by the mid-20th century it had largely disappeared from general use, becoming more of an old-fashioned souvenir. By that time the most popular musical instrument among the general public, most of whom now lived in towns and cities rather than rural areas, was a six-string guitar. That was the instrument of choice for a growing tribe of singer songwriters, known in Russia as bards (bardi), including Vladimir Vysotsky, Bulat Okudzhava, and Alexander Galich, who were not recognized officially but enjoyed enormous popularity thanks to the proliferation of amateur tape recordings.

Blini are thin pancakes made of yeasted batter and fried in a pan. The blin is one of the oldest traditional dishes in Russia and dates back to pagan times, when it symbolized the sun and was used as a ritual food. To this day, blini are the main dish of the Maslenitsa festival (also known as Pancake Week), which is celebrated the last week before Lent. They are also traditionally served at wakes. Since blini take very little time to bake, there is an expression in Russian “to bake like blini” meaning to make something in large quantities.

There is also a saying that translates from Russian as: “The first pancake is always lumpy,” which is often true, because when you start frying blini, the pan is usually not yet hot enough and it is nearly impossible to remove the first pancake from it intact. The expression is used to denote a not very successful start to something. In recent years the word blin has also become increasingly more frequently used not so much in its literal sense as a euphemism for an unprintable swear word that begins with the same two letters.

A Bolshevik is a Soviet Communist, a member of the party (the only party which existed in the USSR). The word originated at one of the first congresses of the Russian Social Democratic Labor Party, when a group headed by Vladimir Lenin got a majority (bolshinstvo) in a vote on one of the key issues. The word stuck and Lenin's supporters became known as Bolsheviks, despite the fact that on many other issues they found themselves in the minority. When the party split into Bolsheviks and Mensheviks, the popularity that the former enjoyed among the ordinary people was largely due to their successful "branding" since the word bolshe, meaning bigger or more in Russian, was equated in people's minds with being better.

Borsch is a soup made of beetroot and other vegetables. It is one of the most popular soups in many Russian households and Russian restaurants all over the world. Borsch gets its characteristic deep color and taste from beetroot, and is always served with a dollop of thick sour cream. It also goes well with garlic and small hot bread rolls, called pampushki. Strictly speaking, borsch hails not from Russia but from Ukraine. In Russian cuisine, its equivalent is shchi, a similar soup in which the main ingredient is cabbage rather than beetroot.

Gulag (actually GULag) was an abbreviation for the Main Camp Administration (Glavnoye Upravleniye Lagerei), set up in the 1930s to run prison (and hard labor) camps where convicts and political prisoners were kept. Thanks to Alexander Solzhenitsyn's famous book The Gulag Archipelago, the word has come to symbolize the entire repressive regime that existed in Russia at the time. People who were convicted (very often on trumped-up charges) were sentenced to lengthy terms (up to 25 years) in camps. Often families were told that a convict had been sentenced to “10 years without the right of correspondence,” which in reality meant that the person had been executed.

An izba is a wooden village house. They were made - with the help of an axe - from logs, which (without the use of any nails) were stacked one on top of another to form walls. The stove was located near the entrance, while the corner opposite was called “the red corner.” This was where icons usually stood on a shelf. Under the icons, the table and the sitting bench were set, with benches for sleeping attached to the other walls. The modesty of the furnishings was compensated for by traditional Russian hospitality. Hence the saying: An izba is known not for its corners but for its pies. There is another popular Russian saying featuring the word izba: to take out litter from an izba (vynosit' sor iz izby), which is equivalent in meaning to the expression “to wash one's dirty linen in public”. In the 20th century, the word and the notion of the izba came to be associated with something backward and obsolete. These days, elements of the izba are commonly used to create a folk interior in restaurants, cafes and bars

In the USSR the word nomenklatura was used to denote the ruling class of party and state officials.

To become a member of the nomenklatura, it was preferable to have "the right" origins (i.e. be from a working class or a peasant family); to have made a career in the Komsomol (Young Communist League) and to have joined the Communist Party. Once a person became a member of the nomenklatura, they usually remained there until their dying day: those who failed in a particular post were typically moved to another (also managerial) position.

A samovar is a metal container for boiling water. Inside is a metal pipe, which is filled with coal or pine cones that are ignited to heat the water in the container. Although the samovar has come to be associated with Russia, it is believed to have been first brought to the country from Western Europe as late as the 18th century. Most of Russia’s samovar production was based in the town of Tula (just south of Moscow), hence the famous saying: “One does not travel to Tula with one's own samovar,” which is synonymous with the old English saying “to carry coals to Newcastle.” In times gone by, samovars were an essential kitchen utensil, whereas now they are little more than a souvenir, with their main function having been supplanted by the electric kettle.

Tsar was the title of the Russian monarch, deriving from the Latin word Caesar. It was first adopted by Ivan the Terrible in 1547. From 1613 to 1917, Russia was ruled by the Romanov dynasty, founded by Tsar Mikhail Fyodorovich. The last Russian tsar was Nicholas II, who abdicated the throne in 1917 in favor of his younger brother Mikhail (who too abdicated immediately afterwards). Thus, technically, the last tsar too was a Mikhail. Interestingly, the first and the last president of the USSR was a Mikhail too (Gorbachev): he was elected to the post in 1990 and stepped down in December 1991.