Not just for the kids: The 5 best-loved Soviet animations 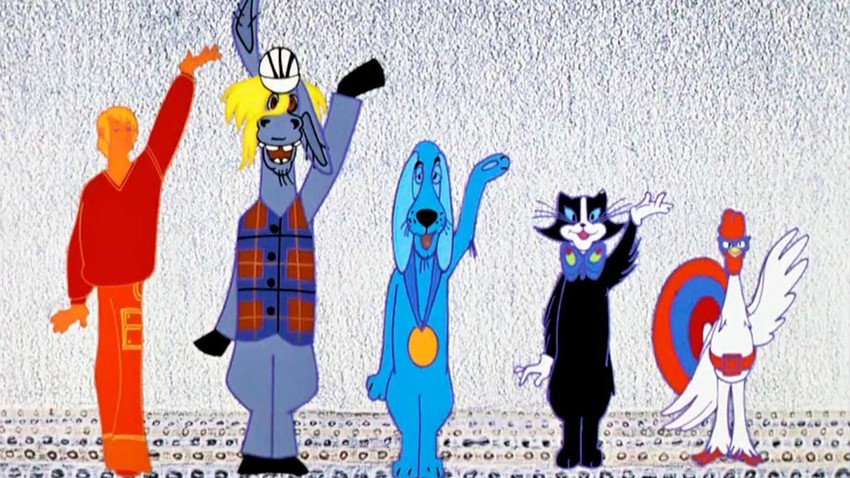 Open sources
In the USSR, animation was a huge cultural phenomenon. Besides being entertainment, Soviet animations also commented on society’s hopes and fears. RBTH has compiled a selection of the most cherished examples of the genre.

In 1969 in the USSR, things like rock music, fashion magazines, hippies and other cultural trends that were flourishing in the West were considered hostile and were accordingly banned from official media. But it seems Soviet animators may have reasoned that if they couldn’t do it in real life, at least they could make a cartoon of it. And so animated rock opera “The Town Musicians of Bremen” was born.

The Troubadour wears a Beatles haircut, flared pants and a disco shirt with pointed lapels; his love interest, the Princess, sports a mini dress straight out of the latest fashion magazines, and they sing together: “Our carpet is a meadow, our walls are trees, our roof is the bright blue sky! The glittering walls of palaces will never be a substitute for our freedom”.

In fact, everyone born in the USSR knows this “hippie-esque” song.

Complete the picture with the Rooster in disco glasses, the Ass in its silly cap, and lute-shaped guitars for everyone, and there you have early 70s pop culture in one children’s cartoon. No wonder everyone loved it, and even now “The Town Musicians of Bremen” remains one of the most loved and most well-known Soviet animated films.

All the male parts (except for the Ass) in “The Town Musicians of Bremen” are sung by one man – actor Oleg Anufriyev.

Soviet children had their own “Tom and Jerry”, only instead of a cat and mouse, they had a wolf and a hare. This is “Nu, Pogodi!”, once the most popular animated series in the Soviet Union.

The plot is simple: The Wolf (just Wolf, no given name) tries to catch the Hare. However, “Nu, Pogodi” is anything but a “Tom and Jerry” clone. Of course, it’s a slapstick comedy with chases and comic falls, but social satire is also involved: The Wolf is a caricature of the kind of “hooligan” disapproved of by Soviet society. He smokes, drinks and wears stylish clothes – like a Hawaiian shirt or bell-bottom pants.

The Hare, on the other hand, is a model Soviet teen: modest, engaging in sports activities, always eager to help others. But, as a typical Soviet teen, the Hare is also very cunning and loves to play harsh pranks, mainly on the Wolf.

The cartoon scarcely has any dialogue: just remember that “Nu, Zayats, pogodi!”, the Wolf’s catchphrase, means “Just you wait, Hare!”, and you are all set. But don’t turn off the sound completely: in “Nu, Pogodi” you can hear popular music of the time, including the Western tunes that Soviet people had no chance to hear on the radio. The “Nu, Pogodi!” franchise is still active, with the latest series released in 2012, although only the 16 series made in 1969-1986 are considered classic.

“Gena the Crocodile” is a three-episode stop-motion animated film that holds a kind of cult status among Russians. It is a story of the friendship between the title character, Gena the Crocodile, who has a steady job working at the zoo, and Cheburashka, a fluffy animal with enormous ears who has arrived in the Soviet Union from Africa in a box of oranges.

The plot is simple and sweet. The characters, even the bad ones like the old crone Shapoklyak and her pet rat, are excessively cute and the soundtrack is perfect. Gena’s song about his birthday (which you can hear in Episode 2, “Cheburashka”) has become a Russian classic.

Since 2004, Cheburashka himself has become an official mascot of the Russian Olympic team. But the series’ fame has spread even wider. A Japanese animation studio recently remade two episodes of the show: One features Cheburashka in an original story and other one is a direct remake of the Soviet series.

4. The Mystery of the Third Planet

Writer Kir Bulychov was enormously popular in the USSR for his children’s science-fiction novels about Alisa, a schoolgirl from a hi-tech communist future. “The Mystery of the Third Planet” is a 1981 adaptation of his novel. “The Mystery” is an animated movie with a complicated detective plot involving space-travel, intergalactic criminals, various aliens and, of course, robots.

But there is more than just an intricate storyline to this film: like “The Town Musicians of Bremen” it represents its era in a nutshell. “The Mystery” has almost all that early 80s pop culture can offer.

Check out the wonderful electronic progressive “outer space” soundtrack, the bright disco colors and the overall futuristic feeling of the film. If you are at least a little familiar with Soviet animation, the chances are that you may have already seen “The Mystery of the Third Planet”: During the 1990s it was widely distributed abroad.

5. Hedgehog in the Fog

The best animated film in the world. That’s official. In 2003, 140 animators from around the world were asked to decide the top 20 animated films ever made. “Hedgehog in the Fog” (“Yozhik v Tumane”) came out top of the pile.

“Yozhik” is an “art house” animated film that contains a suspense and emotion that is uncharacteristic for children’s cartoons. There is virtually no plot – just the little Hedgehog trying to reach the house of his friend the Bear Cub, and ending up in lost in thick fog. The rest of the film is Hedgehog’s journey – with intense background music, visions and reality mixed together in the fog.

The film conveys the beauty and uncertainty of nature in shades of grey and brown. Like any great piece of art, the creators’ message could be interpreted in different ways, but one thing is certain: “Hedgehog in the Fog” leaves a deep impression on everyone who watches it, whether as an adult or a child. “Yozhik” holds a sound cult status in former Soviet countries. During the opening ceremony of the 2014 Sochi Winter Olympics, “Yozhik v Tumane” was referenced as a signature Russian accomplishment, alongside Sputnik and the works of Tolstoy and Dostoevsky.