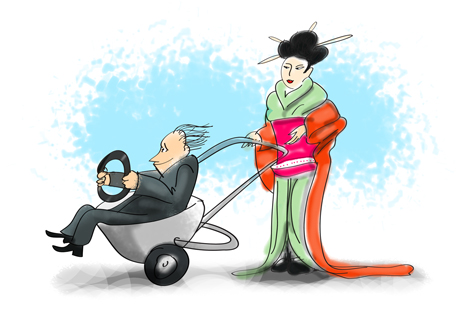 A “tachka,” or wheelbarrow, is a cart with two handles and, as a rule, a single wheel at the front. It is used to transport sand, bricks and other loads on building sites.

After 1970, when a manufacturing branch of the Italian car company FIAT started production in the Soviet Union and the population began to acquire cars en masse, the term took on a new meaning. Up until this point, the automobile had been known simply as the “mashina,” meaning car or machine: Without any ambiguity, the phrase “He has a ‘mashina’” referred to a light automobile, rather than a washing or a sewing machine. Moreover, to own an automobile afforded its owner high social status.

However, when automobiles began to appear en masse and taking particular pride in them fell out of fashion, the opposite happened. It was acceptable to treat them disparagingly or simply as second-rate—something of an accessory. It was then that automobiles began to be called “tachkas,” with a touch of irony.

Correspondingly, to “catch a tachka” became synonymous with the phrase to “catch a taxi,” as there was a shortage of official taxis. You could though simply stand at the side of the road and raise your hand: Before you knew it, a car would pull up beside you. The driver would have no objection to making some extra cash.

If, in the 1970s, it was only Russian-produced cars that would travel on Russian roads, more and more often, in the 1980s, cars began to be imported from abroad. The company that actually made the car was not important—as long as it was foreign. The language reflected this with the advent of a new word: “inomarka,” or foreign car (“ino” is a contraction of “innostrannaya,” meaning foreign, and “marka” means brand).

Today, to own a foreign car (as opposed to just a car) has become a symbol of high social status. It has become even more stylish to disparagingly refer to your “foreign car” as a “tachka.”

In the 1990s, when more and more foreign cars started to appear, they began to be singled out; the most iconic of them were given Russian versions of their names. Thus, a Mercedes ironically became known as a “Merin.” On the one hand, it is a simple and convenient contraction (in terms of the first three letters); on the other hand, it is a manifestation of that ironically disparaging relationship. In Russian, the term “merin” refers to “a neutered stallion.”

The Russian name for the German BMW was not even based on the first three letters, but the first letter alone: It was called the “Boomer.” Unlike the Merin, this word did not exist in Russian up until this point. However, after the movie “Boomer” (which has become a cult classic) appeared at the end of the 1990s, it took on a very special meaning, the point being that BMW was a make that was especially valued among criminal gangs. In the movie “Boomer,” four guys try to hide from the law without success, escaping to the depths of the Russian provinces in their BMW. “Boomer” became a sad symbol of the era of endless banditry in the 1990s.

Japanese makes are probably the most popular cars in Russia today—Toyota, Honda, Nissan and so on. They are given the general pet name of “yaponka,” which basically means “Japanese woman.”

Large off-road vehicles, which, incidentally, travel mostly on asphalt roads in the city, are usually called “dzhips,” meaning jeeps. The most expensive cars have yet to acquire abstract names: They are still called a Bentley, Maserati, or Infinity. An illustration of the social segregation when it comes to cars can be seen in a comment made by a young female Audi driver, who complains bitterly when “Opels” and “Volkswagens” of some kind try to flirt with her.

The billionaire Mikhail Prokhorov recently launched an attempt to reintroduce Russian cars to Russian roads. He announced plans to produce a car that would be named after a single letter, which, moreover, only exists in the Russian language—“Ё,” or the Ё-mobile. Written in Latin script, this would produce two letters, “Yo.” The Russian letter is pronounced in exactly the same way.

The Latin script, however, does not convey the piquant meaning of this name: In a verbal utterance, the single letter Ё is a suggestive euphemism. The most popular Russian obscenity begins with this letter. In effect, it would be like naming an English car the “F...”—just like that, with a single letter followed by three dots.

Naming cars always gives rise to euphemisms. Right after World War II, a car began to be produced in the Soviet Union that the manufacturers initially wanted to call the “Rodina,” or Motherland. It is said that, when Stalin found out about this, he allegedly remarked: “Then people will ask, ‘So how much did you sell the Rodina for?’” After this, the car was renamed the “Pobeda,” or Victory.

Another example dates back to the 1970s, when Russian “Zhigulis” began to be produced for export. It seemed that, initially, a Western client would hear “Zhiguli” (which refers to a geographical region on the Volga in Russian) and think of the Italian word “Gigolo.”

There is a case of this working the other way: The name of the Korean company SSangYong is clearly associated with quite an indecent word in Russian that is linked to the process of urination. Naturally enough, other names are used for this model in Russia.