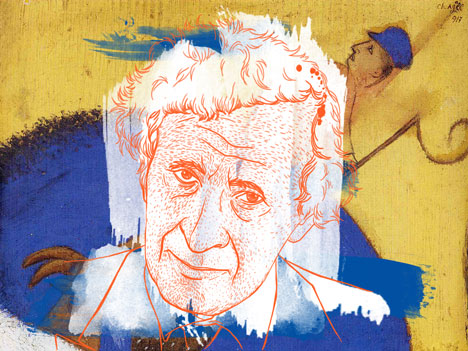 The great artist was born and raised in the Russian empire before moving to France and America, where he attained international fame. He witnessed more than his fair share of manmade disasters

One of the most famous paintings by Marc Chagall (1887-1985) has a rather elaborate name: ‘Time is a River without Banks.’ It is a surrealist picture, depicting a pendulum clock floating along a river. Sitting on the clock, is an enormous winged fish playing a fiddle.

The painting’s metaphor is strikingly apt. Chagall lived all his life like that fish: he had amazing timing. Just as danger approached, he would take flight. That phenomenal intuition saved him from anti-Jewish pogroms, Stalin's purges and fascist concentration camps. He lived until he was nearly 100. A whole century full of wars, cruelty and bloodshed.

Chagall was courted by disaster from his very birth, it seems. Soon after he was born, there was a major fire in the town; it was as if the world was welcoming the child with flame. In the market square, several stalls caught fire.

Soon it spread to nearby houses and an hour later a whole neighborhood was ablaze. To save her newborn son, Chagall's mother carried the crib from one street to another in search of a safe place. "Perhaps that is why I always feel anxiety and the need to move to a new place," Chagall said in later life.

The second time danger came in the form of the famous artist Kazimir Malevich, who was part of the Supramatist movement. After the 1917 revolution, Chagall was appointed the commissar of Vitebsk in charge of the arts.

The job consisted in overseeing a local arts school and organizing revolutionary festivities. Chagall took to it like a duck to water. He staged a surrealist revolutionary festival. Residents of Vitebsk, wearing wide-brim hats and bows in their buttonholes, carried placards that read "Long live a revolution of words and sounds!"

The procession included ladies on stilts, while houses along its route had been painted orange dotted with blue rectangles. Above the city council building, they hoisted a flag with a man on a green horse and a caption ‘To Vitebsk, from Chagall.’

All that would have gone well, had Malevich, the artist behind the famous ‘Black Square,’ not persuaded Bolshevik bosses that Chagall was not revolutionary enough, because he painted real people. Truly revolutionary art should be abstract, Malevich contended.

Of course, it was not about abstraction at all. Malevich simply wanted the commissar's job for himself and was squeezing the rival out. Chagall had to leave. And just a couple of years later reports started coming to Paris that the Soviet authorities were persecuting artists, poets, directors. No doubt a similar fate would have befallen Chagall too, had he remained in the country.

Yet France was not such a safe place either for somebody like Chagall. When the World War II began, he stayed there almost until the German troops came. He nearly missed the moment when he could still escape.

It is not hard to guess what would have awaited a Jewish artist under the Nazi occupation. Back in 1933, his works were burned in Germany together with the rest of "the degenerate art."

At the very last minute Chagall left for New York. He could have settled down there, but he kept on moving for the rest of his life. When Chagall was a child, a gypsy fortune-teller told him that he would die flying.

She was wrong, Chagall died in his bed. But he had lived his whole life flying, like so many characters in his paintings. In Chagall's pictures, everybody is flying: lovers, small-town Jews and even fish. Flying and playing the fiddle.