Making the coat fit: The art of fashioning a luxury fur 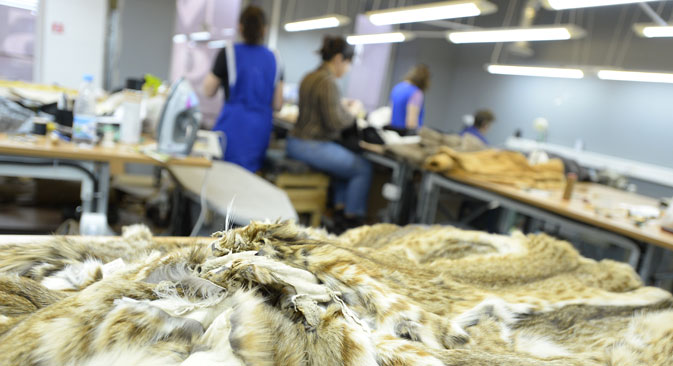 Times and tastes may be changing, but for many Russians fur coats remain a popular way of coping with the sub-zero temperatures of the long winter. The manufacture of luxury fur coats is a complex and time-consuming traditional process that requires a great deal of caution.

The production of fur coats is a traditional and extremely costly business, besides being one that carries a number of health risks. Despite drastic changes in the sector since the Soviet period, Russia remains one of the world’s largest markets for fur coats, and many people continue to do the sometimes dangerous work of transforming animal pelts into luxury items.

Fur coats are made almost entirely by hand. The furrier selects from several dozen the pelts that will be used to make a single fur coat.

“The choice is made according to nap, color and texture – whether the fur is smooth or fluffy. No two animals are the same, which is why the pelts have to be picked out individually,” says Yuliya Shamkina, a furrier at the MaryBelle Fur Factory.

MaryBelle is located in part of a traditional building in the very heart of Moscow, and the factory also has a shop on the premises. A fur coat may be made to order or a finished product adjusted to size, and furriers, technologists, tailors and adjusters are on hand to do just that.

A fur coat is made from a ready-made semi-manufactured product that has already been through all the necessary preparatory stages.

“We buy the fur at auctions across the world and bring it to Moscow,” says Herman Shalumov, one of MaryBelle’s co-founders. “We send it next to be dressed in Europe then bring it back again to Moscow.”

“This is inconvenient and very expensive but the very best quality pelts are easily damaged at the dressing stage. Worse still, dry-cleaning in Russia involves a toxic chemical — perchloroethylene. We can’t risk the health of our staff or our customers so our cleaning is more expensive but eco-friendly,” says Shalumov.

To make a fur coat from scratch, the fur is selected, combed and inspected and only then cut to fit a pattern. The parts are then stitched together on a specialized sewing machine. There is a great variety of equipment ranging from state-of-the-art machinery to units that go back decades.

Pointing to a German-made machine, experts admit that today it would cost about the same as a brand-new BMW X6, although it was in fact manufactured in 1941.

The traditional nature of the work is one of the main features of the fur industry. Fur must not be pressed – it might simply catch fire. The individual parts of a future fur coat are soaked in water, nailed to wood using an air gun and dried to the required shape, a process that replaces pressing.

There is always fur in the air, so the work is not recommended for sufferers of allergies or asthma. It’s a standing joke among furriers that the common cold might well be described as an occupational disease. Incidentally, only women work on the shop floor.

Textile technologist Olga Vorontsova, who studied to be a furrier in Russia and Italy, said that the fur coat business is less dynamic in Europe than in Russia and that this is probably to do with context.

“There’s always something going on here. Moscow’s the first to pick up on all the new trends, whether in production or design.”

Vorontsova is an architecture graduate, something she says is a great help in her work. Even so, there is a constant need to further her knowledge. Professional development takes place at the factory, which also retrains specialists from other disciplines, sending the best to study abroad.

Incidentally, MaryBelle’s specialists acknowledge off the record that there is still not sufficient professional training. The technical colleges that train furriers are closing and the state is not interested in setting up new educational establishments to train professionals for the “fur coat sector”.

From pelt to coat

The production of a fur can be notionally divided into four stages. The first is rearing the fur-bearing animal. The USSR had around 300 large-scale state fur farms and 30 years ago the country was the world’s leading producer of furs. Now, there are no more than 30 of these farms, almost all of them privately owned.

Read more! How to dress like a Russian man

Alexander Saydinov, CEO of the Saltykovsky Pedigree Fur Farm company, said the state is doing little to help the industry. There are subsidies for breeding stock but otherwise the industry has been practically “abandoned”. According to Saydinov, in 2013 alone, it cost $415,000 to buy feed preparation equipment in Europe.

The second important stage is the sale of furs at auction. Pelts, like precious stones, are sold only by auction houses, of which there is a total of five: in Copenhagen, Helsinki, Toronto, Seattle and St. Petersburg.

Next comes dressing. The pelts are soaked, fleshed (removal of the subcutaneous layer), stretched and combed, whereupon the pelt becomes a semi-manufactured product. In addition, dressing is the most dangerous stage of production.

Valery Titov, a furrier at the Perviy Mekh fur company, explains: “We work with acids throughout the whole process: acetic and chromic acids in tanning and benzene is often used to remove fat from the pelt. We have to wear respiratory equipment.” Dressing takes several weeks.

The pelts then move on to the fur factory.