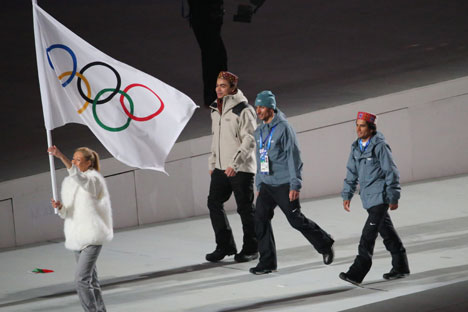 Its time India leveraged its enormous potential to improve its stakes in this industry and brighten its chances at global competitions. Source: Picture Alliance/Photoshot

Experts say that while India possesses the raw ingredients to do well in international sports, focus on a few pivotal areas is lacking.

When the curtains came down on this year’s Sochi Winter Olympics, the question that came to the mind of all Indian sports lovers was:  How can the country improve its performance in global sporting competitions?

For not only did the Russian mega event – which saw participation from 88 countries -- not see India bag any medal across 98 events in 15 winter sports disciplines – the world’s second most populous country was also represented by only three athletes!

It surprises many that despite its giant population, enormous cricketing success, IT prowess and growing geopolitical heft, India’s run at the Olympics has been singularly lacklustre. Overall, the country has won only 18 medals despite uninterrupted participation since 1928, with hockey contributing 11 to that tally. In Beijing 2008, India’s haul was one gold and two bronze medals.

To be fair, India did set records in London Olympics in 2012 for the number of athletes sent and medals won -- six across four sports including a silver and bronze in men’s shooting, a silver and bronze in men’s wrestling, and then two bronze medals for the ladies, in boxing and badminton. But in field hockey, which is the country’s official national sport, the men’s team finished last among the 12 countries!

Not that there’s paucity of talent. Indian cricket and field hockey teams are ranked among the world's finest. Shiva Keshavan, India's most prominent Winter Olympian, and its luge athlete at Sochi, set Asia's new Asian record of 49.590 seconds at the 2012 Asia Cup in Nagano, Japan.

The argument that Indian sportsmen lack state support also doesn’t wash any more. The Indian government has increasingly been pitching in to provide financial assistance, accommodation and sponsorships to meritorious players. India is also perhaps the only country which provides jobs for life to its deserving athletes.

“In almost all countries,” elaborates Samarth Singh, a state level badminton player, “the government only acts as a `facilitator’ by providing good training facilities and basic monetary support for the players.” The sportsman points out that players from Netherlands had to raise their own funds to participate in the 2013 World Badminton championship and even their hockey players routinely do odd jobs apart from playing for clubs and national team to meet ends.

So where does the problem lie? Experts say that while India possesses the raw ingredients to do well in international sports, focus on a few pivotal areas is lacking. Wrestling coach Yashvir Singh, winner of the Dronacharya award (the country’s highest state award for coaches) emphasizes the need for a more pronounced sporting culture in India.

“Encouragement for talented kids from parents and support– both monetary and infrastructure – by schools and sporting bodies needs to be more pronounced,” he prescribes.

In countries like Russia and China, experts point out, training is rigorous and begins early. Even Slovenia, the tiny Balkan nation, which became independent in 1991 (population: two million), boasts of 40,000 registered sportspersons. The country’s strong sporting culture ensures that it hosts over 3,500 sporting associations and most Slovenian adults play some sort of sport. However, in India, most athletes start out when they are in their late teens.

The introduction of a radical National Sports Bill 2011 – that intends streamlining selection procedures for athletes and spruce up the country’s sports administration – also needs to be passed urgently by the Indian Parliament, say experts.

Stepping up corporate sponsorships – currently sporadic – can also strengthen the existing sports ecosystem. Industry body Confederation of Indian Industry (CII)’s report titled Business of Sports - Shaping a Successful Innings for the Indian Sports Industry advises the need for a private-investment led sporting scenario in the country - one that can help entrench a sporting culture and achieve the country’s vision of excellence in sports.

The report states that resource scarcity in India makes it difficult for the government to attain the above objectives. What is required then, states the report, are collaborative efforts of both the government and private sector. “The gestation period for realizing return on such investments may be long, but global experience shows us that it could be potentially rewarding,” concludes the report.

To attract corporate funding, analysts advise that there be a policy shift in Indian sports and the field recognized as an `industry’ which it currently is not. “Being home to various upcoming leagues and the youngest population in the world, India’s sports sector offers tremendous growth potential,” says John Sarkar, earlier a senior official with the Ministry of Sports.

The upgrade to `industry’ status, adds the official, will help actualize the country’s vision for broad-basing sports in India while bolstering infrastructure development, technical support for athletes as well as avenues to groom talented sportspersons.

The global sports industry is estimated to be worth around $600 billion and is growing exponentially at a rate higher than national gross domestic product rates around the world. Its time India – the world’s largest democracy – leveraged its enormous potential to improve its stakes in this industry and brighten its chances at global competitions. With the Rio Olympics beckoning in 2016, the time to act is now!