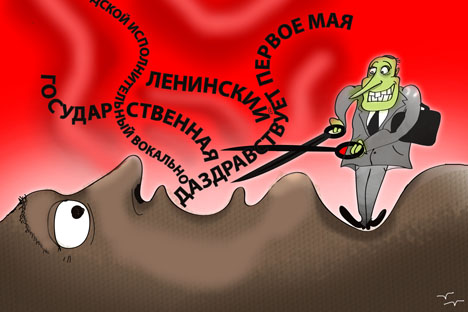 Whether forging a career, shopping, spending a night at the theatre or even simply making their way around the city, people in Russia are surrounded by acronyms wherever they go.

Russians are born in a roddom (rodilny dom - maternity hospital). As small kids, most of them go to a detsad (detsky sad - kindergarten). In the Soviet period, in high school they usually joined the VLKSM (the All-Russia Lenin Communist Youth Union, usually translated into English as the Young Communist League), which made it easier to later get admitted to a VUZ (higher education establishment).

Those who did not aspire for a university degree could leave school earlier and enter a PTU (vocational school) to qualify as a skilled worker. The country’s best VUZ was (and still is) MGU (Moscow State University). Other popular destinations for school-leavers were MGIMO (the Moscow State Institute of International Relations) or MIFI (the Moscow Engineering and Physics Institute). Having graduated from a VUZ, a young Soviet engineer usually got a job at a NII (scientific research institute) or KB (design bureau), both of which were found all over the country.

How to address someone in Russian

As far as leisure was concerned, a popular place to spend an evening was a DK (House of Culture), where there would often be a concert by a VIA (a vocal and instrumental ensemble, meaning a band). One such rock band, which became widely popular in the perestroika years (the late 1980s), was called DDT, which could be interpreted as an acronym for the House of Children’s Arts, where the group was based, or as the name of a popular chemical insecticide.

Russia’s two main cities, Moscow and Leningrad (now St. Petersburg), always had their own, trademark, abbreviations. The two oldest department stores in Moscow are called GUM (the Main Department Store) and TsUM (the Central Department Store), while Leningrad had its own equivalent, DLT (the Leningrad Trade House).

The leading drama theater in Moscow is called MKhT (in the Soviet years, MKhAT - the Moscow Academic Art Theater) and in St. Petersburg, BDT (the Big Drama Theater). Interestingly, the name of the famous Bolshoi Theater was never abbreviated to BT, with the acronym reserved for Bulgartabac, a popular cigarette brand from Bulgaria. These days, the letter combination BT is usually associated with the abbreviation LGBT (lesbian, gay, bisexual, transgender).

Residents of apartment blocks in the Soviet Union were very familiar with the abbreviation ZhEK (housing and maintenance office). Their equivalents now are usually called UK (management companies), though the abbreviation UK is more often used to denote the Criminal Code (Уголовный кодекс - Ugolovny Kodeks). Motorists typically have to deal with the GIBDD (Main Directorate for Road Traffic Safety), previously known as the GAI (State Traffic Inspectorate).

Quite a few television channels in Russia have three-letter abbreviations as their names: RTR (Radio and TV of Russia), STS (TV Station Network), TNT (Your New Television), whereas the popular NTV channel, according to its founders, does not have an established expansion, with the N in the name variously interpreted as standing for наше (nashe - “our”) or независимое (nezavisimoye - “independent”).

If your career lies not in the business world but in academia, you are likely to come across the abbreviation VAK (Higher Attestation Commission), which awards postgraduate and doctorate degrees. If you have a successful career, you may become a VIP (one of the abbreviations borrowed into the Russian language untranslated).

Another English abbreviation that has entered Russian in its original form is PR (usually rendered as пиар (piar). Interestingly, the Russian piar has acquired a slightly broader and somewhat negative meaning, denoting any advertising, promotion (or self-promotion) activity. There are also instances when English abbreviations enter Russian in their translated form, e.g. SPID (for AIDS).