Severodvinsk: Home away from home for families of Indian naval officers 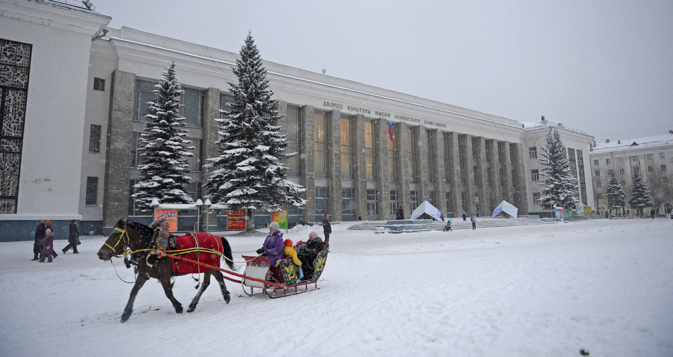 Months after the INS Vikramaditya left Russian shores, spouses of Indian marines recall their time in Russia with affection.

Neelam Ruhani says that her stay in Russia in no way could be called boring. She travelled a lot and especially enjoyed visiting the Fine Arts museum and Malye Karely in the city of Arkhangelsk, which is about 35 kilometres from Severodvinsk, where they lived. In her spare time Neelam explored the rich cultural life of the city. “Russians are very fond of live performances at the theatre, and since tickets are affordable, a stunning range of options is available to everyone, including opera, symphony concerts, musicals, ballet, and drama,” she says excitedly.

Reshma Khan’s favourite places in Severodvinsk are the War Memorial, City Gate, Lomonosova Square, Yagri Beach, Nikolo-Korelsky Monastery and the St. Nicholas Church. She spent a lot of time interacting with locals and says she was impressed with friendliness and gallant manners of Russians. “While travelling in a bus, I have always been offered a seat by gentlemen, which shows the deep rooted chivalry in the Russian men,” she says.

Of course, they did have their hardships adjusting to life in a foreign country. Different climate and food were major stumbling blocks for them at first but very soon they got used to it and even started enjoying it.

Reshma smiles recalling her first taste of Russian winter. “When I first reached Severodvinsk three years ago, I was startled to see snow everywhere,” she says. “It was my first experience of seeing snow clad surroundings and I was indeed very happy. Once I was fully geared up, the Russian winters appeared indeed pleasant,” she said adding that the winters were what she’d miss the most.

For Neelam, whose family is vegetarian, Russian cuisine at first became a challenge. Initially, she continued cooking using ingredients brought from India but later she took a liking to Russian salads.

Simi Matthew says that despite the difference of Russian food compared to Indian, she easily switched from familiar food to cooking traditional Russian dishes like blini, borsch and soliyanka soup. Reshma adds that despite stereotypes there is actually a variety of products available for vegetarians in the form of paneer and a whole range of vegetables in Russia.

For Neelam, Simi and Reshma it was essential to have their children socially integrated and adapted to Russian realities. They recollect with warmth their children’s joyful experiences at Severodvinsk schools and kindergartens.

“In about two months of joining the school, the children could understand Russian and soon they were able to converse with their friends and teachers,” Simi says. “They enthusiastically took part in various school activities like musical concerts, dance programs and sports.” In her opinion, children had such a good social interaction mostly thanks to the teachers who were very efficient, patient and caring.

Notes from the Vikramaditya

For Reshma’s son Ebrahim, Severodvinsk became the place where he took he had several milestones. She proudly remarks: “My son learnt to be independent and to eat and dress up on his own, which was very satisfying for me to see as a mother.” She adds, “one thing I can say with certainty is that the attention which the teachers give to the students is exactly the same as what we as parents do.”

The women feel fortunate to have lived in Russia for some time in their life.

But it’s not just them who will fondly remember that period of their lives. Head of the kindergarten Galina Tsvetkova and her deputy Irina Zaytseva recall their acquaintance with Indian children and their parents with a warm smile.

Irina says it was of utmost importance for them to make the foreign children feel at home in Severodvinsk. She describes their kindergarten routine and activities mentioning that some of the children such as Simi’s younger daughter were leaders in the games, plays and concerts that the kindergarten staged. “You should have seen these kids in action! She exclaims. “They are real firecrackers! And they learnt to speak Russian so fluently, and their accent is just adorable!”

Galina Tsvetkova underlines that while they strived for Indian boys and girls to feel as part of the group, they were still making necessary concessions for them caring about their health and well-being.

Even the menu in the kindergarten canteen was a little adjusted for some children.

“We have the same food array for everybody,” Irina says. “And there were parents who didn’t mind to our feeding their children with non-vegetarian dishes. So they enjoyed eating potatoes with meat – traditional Russian lunch.”

But for those who preferred their children to stick to a vegetarian diet special arrangements were made.

“We gave them vegetarian food and seated them separately from the meat-eaters. You know the way children are,” laughs Irina. “If they see someone else eating something that they can’t, they will immediately ask for this food.”

Galina and Irina add that they were very much impressed with the active engagement of Indian parents, both mothers and fathers, in the children’s studies and activities. “It’s so good that in India parents spend a lot of time educating their children and their pre-school skills are amazing,” Irina gushes. “Can you imagine children as young as four or five can draw and dance very well? Also, many of them having are very good at acting.”

Irina said that it was with a sense of sadness that they saw their young students when the Indian families left for India but they threw a party for each of them. The Russian children presented handmade farewell gifts to their Indian friends.

“We hope that they will remember us just as we remember them,” Galina says.