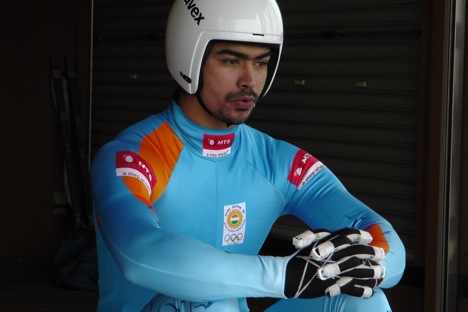 Shiva Keshavan: "We had some results in the Asian level that made us feel good and we have the potential now to do something at the world level". Source: Alessandro Belli

India’s luge pioneer talks to RIR about his plans for participating in the next Olympics Games and preparing Indian athletes for international winter sports events.

Sochi-2014 was your fifth Olympic Games. Did you like your Russian trip?

We had an amazing experience in Russia. Everything was new to us, because it`s a very different country. The Russians made some of the best infrastructure in the world. The luge track was definitely one of the best in the world. The natural beauty of Sochi is incredible, especially the entire Caucasus Mountains. We went all the way to the top of Roza Peak from where you could see the Black Sea. It was really stunning. But the best thing about the games was the atmosphere. All the people who were there, especially young people from all over Russia - volunteers - used to try to speak to us. Every day we had interactions, we made a lot of friends. That was what the Games were about actually - building the links between people. That was successful, so the Games were good.

How was the opening ceremony?

We had the race the next day. We just did the athletes’ march-past. Then we immediately went back to the Olympic Village and then I also watched most of it on TV. What I saw was amazing. As for me, the most touching part was when the countries come in with their respective flags. There was huge energy created with the crowd. Then on TV I watched the full show with the fireworks and dancers and the history and culture. The Russians did a very good job.

Are you satisfied with your results?

I had better expectations for my performance in Sochi. My equipment was not really performing the way I hoped it would. So we decided to take a few risks to make the sled faster like rounding off the edge of the steel to get some more speed but then we did not have any control. So the last run before the race I made it too round and I had a crash and consequently in the race everything had to change. We had to change the steels again and I had to get used to it again. It was not the best conditions for me. I was happy with my last run but I needed four runs like that to make it perfect.

Are there any plans on how to prepare for the next Olympics in a better way?

We started planning for the Olympic Games 2 years ago but for various reasons the proposals did not materialize. Now with all the publicity that has come to the Winter Olympics after Sochi, many people are interested in having a long term plan and now we are lucky because in India, we have a new Olympic Association. So, we have a new President and new Secretary General and they have a chance to make a change and make a difference in sports. I spoke to the Secretary General and we are starting to talk about the long-term plan for the next Olympics. So yes, I will be definitely trying but we are trying so that it is not just me, but an entire Indian contingent. So we will plan for the men’s, women’s, doubles’ and team competitions in luge and I hope that everybody will be able to qualify.

You mentioned long-term plan. You mean for the next four years?

Well obviously, I will have to do a lot of this planning by myself because I have a bit of experience about what is needed. So the main focus should be to have talent scout camps in Himachal Pradesh, Kashmir, Uttarakhand and even other places if possible and select three boys, three girls and two doubles teams who then we can start training. I can also obviously help to coach them initially. Once we do the talent scout, then we need the training bit which will be to travel to Luge tracks especially to the Asian level, international level, Youth Olympic level and so we can have a full team with the coach, physiotherapist, manager. If we get them the right equipment and proper funding, I am sure they will perform well in four years or in eight years or whatever time they need to grow up. We have to think in those terms and obviously in India, we believe in miracles a lot but we should start to believe in reality also and try to plan in advance instead of doing things at the last minute.

Did you get any financial support by the government before Sochi-2014?

The Government had given me partial support for 2 months prior to the Vancouver Games in 2010. Well, this time obviously we had no Olympic Association. So the Government of India stepped in and took care of all our expenses to go to Sochi and also in the months leading up to Sochi, the Government of India helped to pay some of the travel and some of the boarding and lodging expenses. They provided a coach for two months. I hope that in future, we can have a like full time coach and a 4 year plan with them and that will definitely help out a lot.

Who paid for your equipment?

Actually I made the luge (sled) by myself and we had an online fundraising campaign organised by OGQ, Olympic Gold Quest, an Indian NGO. They tied up with this online fundraising portal called Ketto and they roped in a lot of public personalities, famous sportspersons like Leander Paes, Bollywood stars. They all came to the campaign and they promoted it via their Facebook or their social media and so we managed to reach out to a lot of people and all these people, they came and they donated money online from small amounts to big amounts. I do not know exactly the details.

Also, I have been raising money personally through endorsement deals with MTS,  Coca Cola and SWISS International Airlines and I use all this towards sports.

New General Secretary in the Olympic Association was the ex-Luge President. So how does he feel about development of winter sports?

Yes, that is very exciting for us because so far many people in the Olympic Association did not know about winter sports but the new Secretary General of the Olympic Association, he was the ex-President of the Luge Federation. He knows about luge very well, he knows about winter sports. As I told you I met with him and he was very keen to implement some of the long-term plan which we have been speaking about this for a long time and he said that now that he is in power, he hopes that the sport can get a lot of prominence during the next four years.

Do you have your own long-term plans like to participate in next two Olympics Games?

Albert Demchenko is 42 years old, he won a silver medal. The person who won the bronze, Italian Armin Zoeggeler, is 41 years old. So yes, definitely I am 32 right now, so age is on my side. I still have some time to go and I also have quite a bit of experience because I have been doing this now for a long time. That is another good thing. So I hope to use this experience and use the knowledge which I have had so far and if I can back that up with the right facilities and a coach. I mean for me, the two things which are lacking. The main thing is a coach. If I have a personal coach, it can help me a lot and obviously, we are working on the equipment and that has already started. So it is very exciting that I think we can aim for better results before I quit. We had some results in the Asian level that made us feel good and we have the potential now to do something at the world level. So we want to go for it.

Will you go to Russia for training if you have such a chance?

That will be amazing, I mean obviously because I have a very good opinion on Sochi and our experience in Russia was very good and the facilities there are very good and Russia is a country that understands that you have to take care of your sports persons, sports administrators have to pay athletes’ expenses and you have to give them a salary. So I would be very happy that if Indian Government can do something like that and we can travel to Russia.