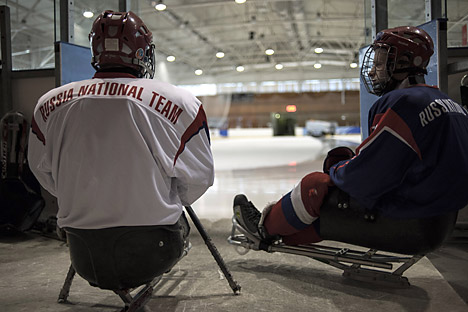 For many players, the most important thing is not winning but overcoming insecurities and fears as a result of disability. Source: Grigoriy Sisoev / RIA Novosti

The sledge-hockey team looks to make up for the disappointment of their ice hockey counterparts, who disappointed fans in the Winter Olympics.

Russia’s sledge hockey team is hoping to outshine the efforts of the country’s hockey team at the Paralympics in Sochi, which began on Friday, March 7.

This will be the first time Russia has fielded a sledge hockey team in the Paralympics . The team was formed only after the 2010 Vancouver Games, but in just three-and-a-half years, they have become one of the world’s leading teams. At last year’s world championships, Russia won a bronze medal, and the team dreams of beating their greatest rivals - the United States and Canada – especially on home ice.

“Six years ago there were no sledge-hockey players in Russia - only the most well-informed of hockey experts knew it existed,” said Sergei Samoylov, head coach of the Russian team. “In 2007, I gradually started to gather information on the Internet from people who watched the game first hand. We steadily built up a coaching staff and purchased the first sledges, made in Canada, almost at random. It turned out that these sledges could be quickly adapted to suit different disabilities. We taught ourselves. In 2009 though, after the country’s first sledge-hockey championships we went to the international tournament in Estonia. We took a beating from the host nation. After the match, one well-known local specialist explained to each of our players what they needed to do. One of them needed to shift the runners on their sledge…another to let the hockey stick out slightly…this is how we assimilated to this new sport.”

The members of the team found their way to the sport through an advertisement. “We placed an ad on the Paralympic committee’s website: ‘We are looking for players for a Russian sledge-hockey team,’” said Dmitry Lisov, the team captain. ‘We just let the guys sit on the sledges and skate around. Those who took to it stayed. When I was invited to stay with the sledge-hockey team I immediately agreed. We were given our sledges, and I noticed that one of the players was leaning energetically into the corners, throwing themselves into the turns, and I thought ‘What’s so difficult about that?’ On my first two turns though I ended up in the side fence. It was only after two or three hard training sessions that I started to get the hang of it.”

The journey from total amateurs to one of the world’s leading teams took place in record time. In just three years, there were six sledge-hockey clubs in Russia for disabled people and Russia won third place in the first world championships.

“When the team fought its way to the world championship, many people laughed at us. They thought we would lose all our matches,” Samoylov said. “But we were on the backs of all the European teams and one Asian team. We only conceded to Canada and the United States – but even they can be beaten.”

A return to a fulfilling life

For many players, the most important thing is not winning but overcoming insecurities and fears as a result of disability.

“In our opinion, sledge-hockey has helped at least one person return to a normal life. One of our players, Ruslan Tuchin, lost both his legs. He was already resigned to the idea that his life was over,” said Lisov. “Ruslan did not leave his apartment for eight years. He found sledge-hockey completely by chance – his friends invited him to have a go as a joke, but he got used to it and became one of the best players. Now he is on the national team, and he has a family. A year and a half ago his son was born. He now feels fulfilled.”

The team is taking the Sochi Games very seriously. “In 2013-2014, we had some specific, very difficult training,” said striker Igor Lomakin. “We paid more attention to tactics and play in a more visual way. Not only do we head into the zone and crush an opponent but we create chances on goal. Nobody else in Europe plays the game that way.

“We are in good form in the run up to the Paralympic games and we will try and beat our opponents. We are taking our preparations very seriously and we are dreaming of a gold medal. You have to understand though that the level of development in our sport in North America is on a somewhat different level. For example, in Canada, there are around 200 club teams. The competition there for a place in the team is very high, while there is virtually no competition in Russia. I hope that when the state begins to support our efforts, sledge-hockey will become popular across the country.”

The Winter Paralympic Games which started in Sochi on Friday will end on March 16. Athletes are competing for 75 sets of medals in five disciplines. At the previous Paralympics in Vancouver, the Russian team won 38 medals – 12 gold, 16 silver and 10 bronze.