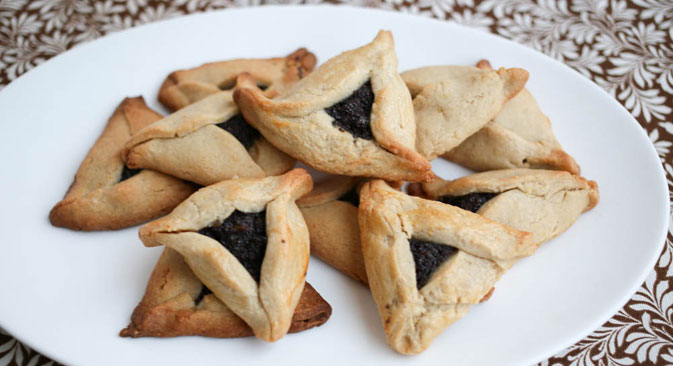 As Russian Orthodox Christians settle into the 40-day Lenten fast, let’s explore some of the other ethnic and regional dishes that make up Russia’s wonderfully diverse cuisine.

As a once-and-future New Yorker, I am ever conscious of the great debt America’s eclectic cuisine owes to the many Jewish immigrants who came from Eastern Europe and the Russian empire at the beginning of the 20th century.

Without them, we would not have pastrami on rye, matzo ball soup, or bagels, and none of that is worth thinking about.

But, when I ask Russians in Russia about Jewish food, they seem vague about this rich culinary tradition, which knits together strands of Ashkanazi German, Polish, Baltic, Russian, and Sephardic Central Asian, Italian, African, Middle Eastern, and Mediterranean dishes, ingredients, and spices.

A pinch of salt; 3 Tbsp sugar

1 egg (for glazing the pastries)

Jews are gearing up for one of the most ebullient holidays of their liturgical calendar: Purim, which commemorates their deliverance from Haman, an evil counselor to King Xerxes I of Persia who sentenced all the Jews to death for their failure to give up their customs, dietary laws, and for their leader, Mordecai’s refusal to bow down before Persian leaders.

But Haman had not reckoned with Mordecai’s niece, Esther, whose beauty enabled her to become Xerxes’s queen, and whose faith strength of purpose enabled her to save her people. Haman was hung in the very gallows he had built for the Jews of Persia.

The Jewish calendar is lunisolar, and so, like Easter, the date for Purim floats from year to year, but it usually happens in early spring.

Jews, particularly those who lived in fifteenth century Italy and Spain, clearly borrowed something of the raucous party or carnival aspect of Shrovetide from their Christian neighbors and incorporated into the celebration of Purim.

Purim is solemnized in synagogues throughout the Jewish world with a reading of the story of Haman and the Persian Jews in the Book of Esther, after which the streets erupt in a joyful Halloween-like atmosphere: adults enjoy a lavish meal with lots of wine, while children and teenagers dress up in costumes and visit friends and relations, bearing festive food baskets, which are also distributed, along with other charitable donations to the poor.

No Purim is complete without the triangular-shaped pastries called “Hamantashen” or “Haman’s Ears.” These light, buttery, pastry-like cookies are traditionally filled with a delectable poppy seed filling.

They are fun to make with children, and both the dough and filling can be made ahead of time. This recipe comes from Claudia Rodin’s marvelous “The Book of Jewish Food,” which is a must-read for anyone embarking on a voyage of culinary discovery.

1. Prepare the dough at least 3 hours ahead of the time you want to bake the cookies, as it needs to chill in the freezer.

More: A fast to pay for the feast

2. In the bowl of a standing mixer or food processer, fitted with a paddle blade, combine the flour, salt, allspice, cinnamon, sugar, and vanilla extract. Add the diced butter and pulse several times until the butter is combined. Add the egg yolk and knead for about 10 seconds until the dough forms a soft ball.

3. Wrap the dough in plastic wrap and chill for at least one hour or up to 12 hours.

4. While the dough is chilling, make the poppy seed filling: Combine the poppy seeds and milk in a small sauce pan and cook over medium low heat, stirring with a wooden spoon until the liquid is absorbed and the mixture takes on the texture of wet sand.

5. Add the honey, prunes, sugar and butter and cook for another 10 minutes on low heat. Finally, add the lemon zest and Cointreau, stir to combine, then let cool to room temperature.

7. Prepare a cookie pan with parchment paper and have a spatula, biscuit cutter or drinking glass and a pastry cutter handy.

8. Flour a clean work surface and rolling pin, then roll out the dough until it is approximately 1/8-inch (3 cm) thick. Then cut the dough into circles using a drinking glass or biscuit cutter. Place the discs on the prepared cookie sheets.

9. Spoon a scant teaspoon of filling into the center of the dough, taking care not to use so much that it runs over the sides of the cookie. Fold three flaps of the dough disc into the center to create a triangular-shaped pastry with the filling peeping out. Wet your fingers and pinch the corners to ensure that the triangles do not unfold during baking. Brush the beaten egg lightly over the cookie and bake for approximately 17 minutes in the preheated oven.

10. Let the baked cookies remain on the tray for 5 minutes, then carefully remove them with a spatula to a prepared rack and let them cool completely. The cookies are fragile, so if you are packing them up to give as a gift, be sure to use layers of tissue paper!

which is available from amazon.com and other online retailers.