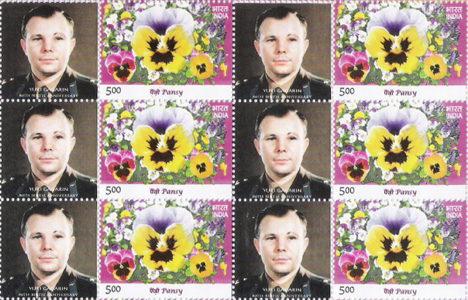 A postage stamp in honour of Yuri Gagarin’s 80th birth anniversary was presented at the Russian Centre of Science and Culture (RCSC) in Trivandrum on Sunday, March 9. It is adorned with a photo of the first cosmonaut and with flowers.

The stamp was released by N. Sakthan Nadar, Deputy Speaker, Kerala State Legislative Assembly. “Russia is a leader in the development of space science technology,” Nadar said. “The first Indian cosmonaut Rakesh Sharma could enter the outer space thanks to the cooperation between Russia and India. This co-operation in the field of space technology is a model for the entire world. After his space flight Yuri Gagarin was given a red carpet welcome in India. Gagarin’s space flight was considered as a greatest milestone in the space science technology.”

The contribution of Yuri Gagarin to space exploration was lauded by numerous representatives of India’s scientific community.

Udupi Ramachandra Rao, former Chairman, India Space Research Organisation (ISRO) said Gagarin made dreams to discover the world of stars and galaxies come true. “Gagarin's space flight was the most significant revolution in the journey of mankind after the agricultural and industrial revolution, Rao was quoted by Itar-Tass as saying.

G. Madhavan Nair, who was head of ISRO in 2003- 2009, emphasized, that all Indians see this date as a landmark due to the fact that Yuri Gagarin “started a new era in the history of mankind.” He added, “The journey commenced by him opening up space which lead to human flights to the Moon. The day on which we land on Mars is also not far.”

According to Nair, Gagarin's endeavour paved the way, and in the next decades space flights will be as common as air travel. “Gagarin's journey in Sputnik also inspired the Indian scientific community. We submitted a report for Indian manned moon mission when I was Chairman ISRO. Due to some administrative and political reasons it could not take place yet, but the day will come when this dream of ours will also be realized,” he added.

In May 2013 RCSC released a stamp in Trivandrum which was dedicated to the 50th anniversary of Valentina Tereshkova’s flight into space.  The stamp was circulated in June, when the whole world was celebrating the anniversary of the historic flight of the first female astronaut. India Post also released a commemorative envelope with a circulation of about one thousand copies, with an image of the first female cosmonaut in a spacesuit, with the inscription in both Hindi and English: “The 50th anniversary of Valentina Tereshkova's flight into space.”