Memories of Holi in Delhi 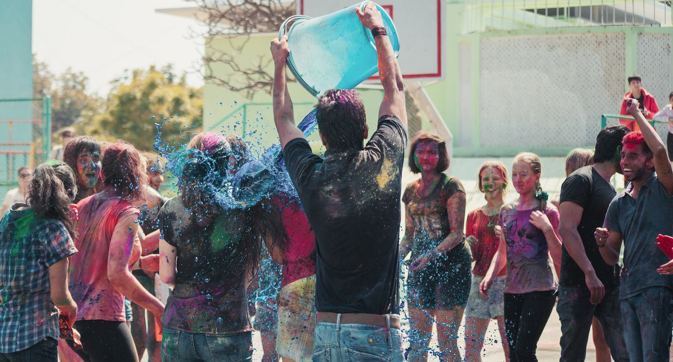 Holi is celebrated with much gusto by Indians and foreigners alike in Delhi. Source: Ludmila Shunina

RIR’s editor, who was a student at Jawaharlal Nehru University in 1984-85, shares his impressions of his first festival of colours in India.

I can never forget the morning when my serene sleep in a dormitory room at the Periyar hostel in Jawaharlal Nehru University (JNU) was ruthlessly disturbed by a group of friends, who burst in. They were fellow international students, who like me, came to India for training from different parts of the world, as well as local students: Lolit, Vinod and others.

“Are you still sleeping? Get up it’s a holiday, after all!” Sattor, a Tajik from Dushanbe, shouted excitedly, handing me a jug of some drink. “Come on, hurry up, drink it and let’s go.”

“What’s that?” I asked sleepily.

What could I do? I took a couple of sips.

“It’s Bhang, it’s Holi today, you’ll love it,” someone said, running out of the room.

And he was right, I really liked it.

This was long ago, almost a lifetime ago, but the year that I spent in India, and the celebration of Holi in JNU, is still fresh in my memory.

India immediately strikes visitors with its bizarre abundance of bright colours, which are astonishing for the eyes of northerners, who are more accustomed to the calm, often gray shades of the surrounding world, as well as by the inexpressible smells, combining the subtle fragrance of flowers and smoke, coming from furnaces, fed with bricks of dry dung, and the heavy smell of mustard oil, heated in a skillet.

By that day I’d had lived in JNU for almost 7 months, but when I dressed and went out into the street, I realized that I had not seen India in its true colours, neither did I feel its real energy till then.

It seemed that the whole world went crazy. The patio with a small hut-cafe that divided the men’s and women’s dormitories was covered in a multi-coloured haze, and it seemed there was a rainbow over it in the sunshine. Loud conversations, bursts of laughter triumphant screams and plaintive cries were heard from everywhere. Students in smeared clothing and painted faces gathered in small laughing groups, and then chased each other. Shawls on Punjabi costumes, as well as the hair of graceful students, all in colourful spots, fluttered in the breeze. A multicoloured waiter served tea, and a coloured Kukurka dog closely watched me from around the corner.

It was wildly funny. That’s the way we do it. I spread my arms and shouted, “Guys ... I’m with you!” I hadn’t managed to pronounce the last sound, as someone rushed up to me and started to rub my cheeks with something. I was somewhat taken aback, but did not resist. The person who attacked me was a young unknown boy. Then he moved back and quietly and politely said “Holi Mubarak” and then he sped away.

I certainly had read something about the Holi festival (note, this was in the pre-Internet era), but, as far as I could remember, it was about pouring coloured water on one other. Here, every now and then, you are approached by unfamiliar guys and girls who pretty aggressively rub your cheeks with dry paint of various colours and with a very polite smile congratulate you on the Holi and go away.

Apparently, I went out into the courtyard in the full swing of the holiday. Suddenly I was attacked by several people at the same time from different sides: someone rubbed my forehead with paint, someone rubbed my cheeks, and someone with a cheery childish smile showered my hair with paint.

Soon this coloured wave lifted and overwhelmed me. I understood the rules of the game and got involved in it, naturally paying attention to the wonderful local girl-students. I don’t remember that I ever felt so at ease and happy ... it’s a Flower Carnival and the celebration of absolute disobedience, breaking all the taboos, to feel a part of this beautiful world and gladly accept it in all its diversity...

Suddenly, Lolit, my Indian friend, was beside me. “There he is!” he creaked and added softly, “Come on!”

I looked around, there from around the corner came Professor Kumar. He was grandly marching, thrusting forward his stomach. He used to teach us Hindi – a very priggish and silly character, who would be at least half an hour late for our classes.

Apparently, the bulky figure, as well as the status of professor, inspired reverence in the skinny students and his face and clothes had almost preserved their natural colours. I realized it was my time and my duty, to at least partly compensate for Kumar’s moral bullying and long hours of struggle with sleep at his lectures.

Grabbing several bags with paints of different colours, Lolit began to make the rounds. As for me, I made a frontal attack. “Professor, Happy Holi!” I said loudly and began to polish his forehead with green paint and his cheeks with blue. Sattor ran up and very appropriately smeared his nose with red and Lolit poured over Kumar’s head his entire arsenal of paints. And here it is, in front of the astonished audience, the respectable professor turned into a classic clown, his wry smile and the briefcase under his arm only strengthened this impression. We instantly turned into heroes in the eyes of others.

Meanwhile, the military-carnival actions continued. Four girls from Poland, who were studying English in JNU, formed a kind of defensive figure, covering their faces with their hands and fighting off the guys who periodically attacked them, were moving towards the women’s hostel. The face of the fair-haired student from Canada had turned into a kind of dark purple mask, on which her big blue eyes shone with astonishment. “So that will be the colour of one’s face if you rub many different colours in it,” I thought analytically.

I remember it was very interesting to look at people and their faces – how much paint they had received. There were heavily affected people, their “colouring” no longer fitting into any colour scheme, but there were those whose facial features and the type of clothing were still recognizable.

I went to look around the campus, but as it turned out, there were “snipers” with bags of colours lurking behind every tree, and every bend in the road.... Trying to reach the local market, I was sprayed with water of all colours from a passing truck.

Finally, we went to relax and share our impressions in the hostel.

At about 3 o’clock Sanjar from Tashkent came. He was all coloured and there was someone’s hand imprinted in red on his back. It took him a long time to wash his eyes, he spat out, shook off the paint from his ears, and finally said that the fighting in the street began to subside. People went from the campus to the city, apparently to movies and parties.

The shores of the Far East, adorned in the bright colors of Holi

“Yes, you need to experience and feel it,” he said philosophically. “Otherwise you won’t understand anything.”

Those of us, who came to India for a short time to study its languages ​​and history, agreed with this culturological straightforward conclusion. And Holi gave us the clue to this understanding, which we have kept for a lifetime. You cannot understand a foreign culture, trying to look at it objectively – objectivity simply does not exist. You need to experience it and pass it through yourself. You need to live and fully experience the emotions that are raging around you, try to feel the spiritual experience of the holidays, and of everyday life, as well as the feeling of sacredness in the Indian temples, standing among thousands of pilgrims to the shrine in the queue, as one of them. You need to “remove” yourself, to become a grain of sand and feel that you are both a part and the whole. Only in this way, can a person understand another, and one culture can understand another culture.

And then we went out again, we caught a colourful rickshaw and we went into town. People on motorcycles raced past us, their faces and clothes were of all colours: bright red, yellow, orange, blue, purple, green... And on the road here and there you could see pink, blue, yellow, green puddles...

And young Rajiv Gandhi looked down at us from the posters...