Clothes make the man: The role of the uniform in Tsarist Russia 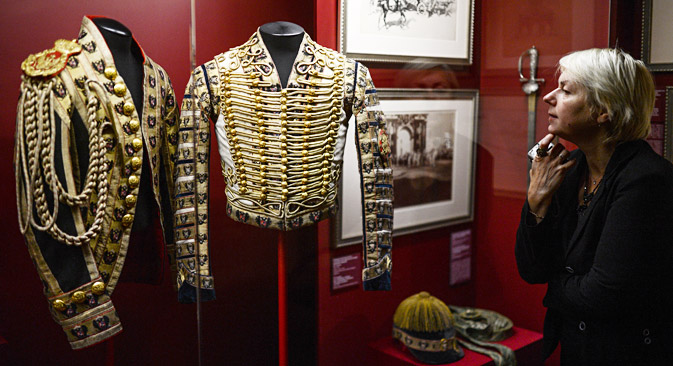 The Russian empire was the country of the uniform. From the college to the government office, all working men or students wore a uniform that was approved by the tsar. Source: Vladimir Astapkovich / RIA Novosti

The Ukrainian-born writer Nikolai Gogol famously penned “The Overcoat”, the allegorical tale of a petty bureaucrat who loses his social standing. The story symbolizes the role of the formal coat and uniform in Russia, where it was not merely a garment, but a symbol of dedication to one’s country.

In 1722, Peter the Great approved the Table of Ranks, a groundbreaking register of civil and military positions that systemized the Russian bureaucratic machine in the European manner. Every rank had a corresponding uniform, which thenceforth made it possible for anybody to precisely identify a bureaucrat’s job and his position in society.

The clothes make the man: For young men, this was one of the most important arguments in favor of employment, including civil employment. Even lowly newspaper vendors wore special clothing: a long, double-breasted coat with a peaked cap and a distinctive small bag slung over the shoulder.

The uniform also helped the government’s image: Under Peter, Russia started to speak the same language as Europe — in donning clothing that was familiar to Westerners, Russian bureaucrats ceased to appear as half-savage Slavs in the eyes of foreigners.

Peter the Great himself wore a uniform of exceptionally domestic making. In fact, the uniform catalyzed the establishment of a textile industry in Russia, spurring the development of clothing production.

Huge government orders for ready-to-wear uniforms stimulated the shift from the small-scale artisanal production of fabric and garments to full-scale manufacturing.

The Russian empire was the country of the uniform. From the college to the government office, all working men or students wore a uniform that was approved by the tsar.

Charts with detailed descriptions of the cut, color, ornament, material and even the measurements of these outfits were published in the texts of the laws. Every tsar personally approved and adjusted uniform designs as he saw fit.

Women were not affected by this issue. There were tacit recommendations that workers in educational and medical establishments wear modest colors and chaste garments that were virtually devoid of extra adornment — for the most part, women wore dark-colored, high-collared dresses.

Every educational institution and government department had its own uniform, which came in several versions: formal, everyday, day off, winter, summer. For example, officers in the heavy cavalry guard had five or six uniform changes.

Rank-and-file soldiers of the same regiment had three different uniforms. Moreover, within each government department, the uniform differed depending on the wearer’s class and rank.

The shoes were black laced boots. High boots were permitted only with a double-breasted jacket, greatcoat or frock coat during missions. According to Soviet historian Yakov Rivosh, “Distinctive insignias based on rank were the same for all the ministries and government departments. They were fastened to the stripes or the shoulder straps,” writes Rivosh.

“There were stripes on all types of formal clothing, except the justacorps and uniform dress coat. The stripes bore the emblem of the ministry or government department, just like the one on the cap, but smaller. The bureaucrats’ dress uniform was the justacorps — a single-breasted jacket with fasteners on nine buttons and trousers with a braid lampasse [trouser stripe] (4th rank and up). All the medals and a ribbon (the oldest of the orders possessed) were worn on the dress uniform, along with a sword, white gloves and a white vest that was not visible.”

The colors were subdued, as Rivosh describes: “The justacorps, frock coat, dress coat and trousers of the uniform were usually bottle-green in color. Only bureaucrats in the Ministry of Education and Academy of Arts wore dark blue. In the summer they wore frock coats, vests and sometimes trousers made of bleached or unbleached linen or of lasting (closely twilled cotton fabric). The coverings on the peaked caps were sewn from the same material.”

The dress coat worn by senators, which was sewn with golden thread, was worth one month’s salary for a minister. The coat’s prestige was so great that even merchants and manufacturers, who were far removed from government service, envied it.

They gave substantial donations (hundreds of thousands, and even millions of rubles) to the Offices of the Empress Maria fund, which was maintained as a trustee for orphanages, homes for the elderly, hospitals and other charitable institutions.

The evolution of Soviet revolution fashion

The reward for benevolence was the right to wear the striking uniform of this office. Moreover, the lavishness of the uniform depended directly on the size of the donation.

The universal use of uniform came to an end with the dissolution of the monarchy. Nowadays, only workers in some military departments and judicial agencies wear uniforms.

However, the uniforms of the Tsarist era have made something of a comeback of late, inspiring designers like Russian Anastasia Romantsova.

In creating her fall/winter pre-collection for 2014–2015, Romantsova turned to the motif of the Russian dress uniform, using ribbons and orders on starched collars and other flashy elements of the coat.

M.A.Ostrogradsky in the uniform of the Department of institutions of Empress Maria Romanova. The end of XIX century. Source: Wikipedia

“Police officers wear the same uniform and they are recognized. The bureaucratic administration that services the government should also be recognizable. They should wear tasteful outfits,” said Dmitry Malov, a deputy in the Troitsky District Assembly, in an interview, proposing that all Chelyabinsk Region bureaucrats be dressed in identical, but stylish, uniforms.

The triumphant return of the Overcoat is in the offing.