Folklore and traditions related to the months of the year 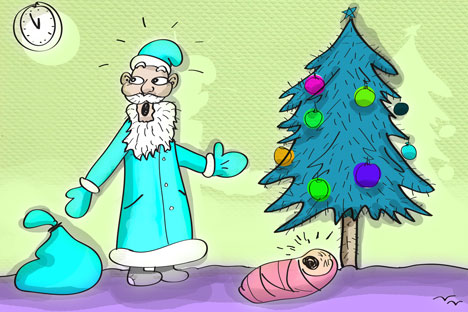 Several idioms and sayings in the Russian language are affiliated with each month of the calendar year.

In Russia, as in most parts of the world, the New Year is celebrated according to the Gregorian calendar; however, the Orthodox Church continues to follow the Julian calendar, which is 13 days behind.

This is why Orthodox Christmas is celebrated not before the New Year, but after it, on January 7. Most paradoxical of all, the Russian language contains the notion of an “Old New Year”, which occurs on January 14, in accordance with the Julian calendar. The old and the new coexist, and therein lies the oxymoron.

The second month of the year is marked with the folk saying “February is crooked roads,” and in literature with the famous line by Boris Pasternak: “February. Pick up your pen and weep.”

March is the first month of spring, and a popular saying warns people that the cold has not yet departed: Martok — nadevai dvoe portok, “It’s March — put on two pairs of pants.”

The first day of April is April Fools’ Day, when it is traditional to make a fool out of people; hence the saying “I don’t believe anyone on April 1!” The end of April is usually when Orthodox Easter falls; during the officially antireligious Soviet period this was the most popular folk holiday.

The first 10 days of May are full of holidays. May 1, which in Soviet times was celebrated as International Workers’ Solidarity Day, became the Day of Spring and Labour in contemporary Russia.

May 9 is Victory Day, the day of the Soviet Union’s victory over Nazi Germany in 1945. A song that is considered a sort of anthem to this day contains the lines “This Victory Day has become permeated with gunpowder, this holiday brings tears to one’s eyes.”

In folklore, May has negative associations — according to a saying, V maye zhenitsya — vsyu zhizn mayatsya, “Get married in May, suffer for the rest of your life.”

June in Russia is also associated with World War II; more specifically, June 22 – the day that, in 1941, in the early hours following the shortest night of the year, Germany commenced its invasion of the Soviet Union.

In 1992, right after the dissolution of the Soviet Union, the national holiday became June 12, the day when Russia’s Declaration of State Sovereignty was adopted. At that time, it signified the proclamation of Russia’s “independence” (regardless of the fact that it had been the core republic of the Soviet Union); therefore this day consequently also came to be known as Independence Day.

However, because many people were saying ironically that the country was declaring “independence” from itself, the holiday was renamed Russia Day.

July is traditionally known as the dog days of summer; it is the height of the vacation season, a carefree and nonchalant period. An iconic film from the 1960s is called “July Rain”, and an image of July rain, from a song that played in an earlier (1963) film, “Walking the Streets of Moscow”, became a symbol of the bright and hopeful 1960s: “Everything in the world is good — what’s wrong, you won’t get it; it was just ordinary summer rain, ordinary summer rain.”

Beginning in August, the same rain is perceived in a minor key, like a sign of the approaching fall: “Soon it will be fall, August is beyond the windows, the rain has darkened the bushes, and I know that you like me, just as I once liked you,” goes another popular song from the 1960s.

Russia’s recent history confirms the reputation of this month as gloomy and fraught with catastrophes: in 1991 there was the three-day so-called August putsch, whose objective was to preserve the Soviet Union and that ended in defeat — the Soviet Union ceased to exist in December of that year.

September 1, when the school year begins, is officially known as the Day of Knowledge. As the popular song goes, “Fall will not ask, fall will not come. Fall will freeze with a question in its blue eyes. Fall will be felled by the rains and covered in leaves . . . It will drag itself along the empty beaches.”

Although the beaches do indeed empty, September is the time of the so-called old wives’ summer, or Indian summer, when for a few days the weather is dry, clear and hot.

In Russian culture, fall is viewed as the most “creative” period: the language has taken on the phrase “Boldino fall” — in the fall of 1830, the poet Alexander Pushkin wrote several of his masterpieces all at once.

Meanwhile, October is the time that is connected with the biggest lexical and ideological paradox of the Soviet era. The 1917 Bolshevik Revolution occurred on October 25 and was officially named the Great October Socialist Revolution.

However, following the adoption of the Gregorian calendar in 1918, this date “moved” to November 7. For many decades the anniversary of the revolution was celebrated on this November day using a symbol associated with a different month: “Great October”.

After December 21, the shortest day of the year, there begins a period about which people say, “The day lengthens, the cold strengthens.” In December, everyone greets one another with the phrase, “Happy New Year! Wishing you new happiness!” And they begin to wait for this “new happiness.”