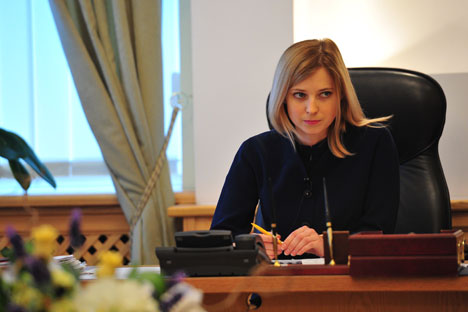 Newly-appointed Attorney General of the Crimean Republic Natalya Poklonskaya has captured the hearts of Japanese internet users. The 33-year-old has spawned online discussions, Youtube videos and even anime artwork created by her new fans.

Natalya Poklonskaya, 33, appointed Attorney General of the Crimean Republic by the Supreme Council of Crimea on March 11, has taken the internet by storm, with a whole host of videos of a press conference given by Poklonskaya springing up on YouTube in the last few days. One video already has more than 24,000 views.

Furthermore, pixiv.net, an online community for anime-artists, is filling up with dozens of drawings inspired by Poklonskaya. The looks of the newly appointed attorney are absolutely in character with the standards of Japanese animated-cartoons — large eyes, regular features and even her blond and slightly wind-blown hairstyle.

According to one Japanese user who commented on a YouTube video of Poklonskaya, “She is the most beautiful girl-attorney in the world. She appears to be 16, not 33. Premier Timoshenko also was a bella [sic]. The Ukrainians seem to be promoting women to top positions for their beauty.”

Many viewers write that Poklonskaya does not look her age and that they are dying to serve under her command. Meanwhile, Russian internet users have been circulating striking images taken from Poklonskaya’s social media accounts.

However, Poklonskaya boasts 12 years of work experience with law enforcement agencies. Her career has also brought her into contact with organized crime, as she has formed part of investigation teams looking into cases.

“We hope that Natalya’s work does not prove too stressful, especially considering the current stand-off. We shall keep our fingers crossed for a peaceful outcome and that everybody will be happy,” said Japanese-language news blog RocketNews24, summing up its report about the Japanese obsession with Poklonskaya.

The new Attorney General has pledged to discharge her duties in compliance with law and for the good of the Crimean people.