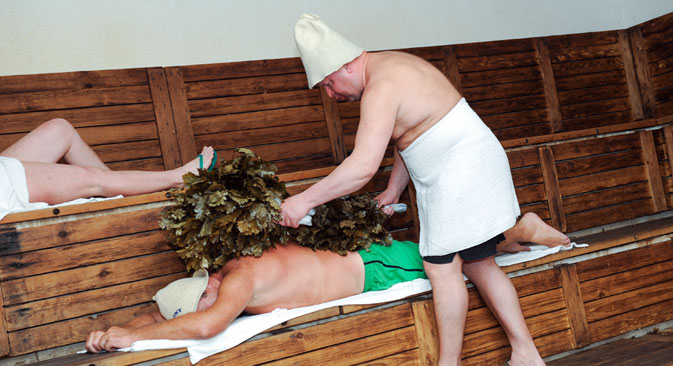 RBTH's correspondent visits Russian banyas in New York and shares her impressions on how they stack up to the real thing.

In a faraway land, in the shadow of the trembling rails of the overhead subway, there is a magical kingdom of subzero pools and bubbling baths and wooden enclaves from which half-naked humans peacefully appear cloaked in plumes of steam.

This is a land where proudly hairy men will offer, with an encouraging and polite grunt, to whip you with a bouquet of birch leaves and then dump you into ice-cold water, from which you emerge reborn with stronger spirit and softer skin and soothing senses. And this land is called the Russian banya.

In Soviet Russia, the banya (literally “bathhouse”) had a noble history as a haven where men and women would go, separately and nakedly, traditionally on Sundays for their weekly bath. This was at a time when your only other option might be to grab a bucket and a hot kettle and pour it over yourself in the open air of a communal kitchen.

In New York, banyas have acquired a more spa-like quality, and welcome both sexes, dressed in bathing suits.

As far as the Internet decries, there are two Russian banyas in Manhattan and four in Brooklyn. Of them, Sandoony (1158 MacDonald Avenue), is largely considered by natives to be the most “legit,” because it has the greatest contingency of Russian men escaping their wives, and because, as one weekly patron informed me, “The saunas themselves are made properly, and the pechka [coal oven] was flown in completely intact straight from Moscow!”

I asked the manager, David Israil, whether this enthusiastic endorsement was accurate. “Absolutely not,” he laughed.

“But they are very close replicas of the ones made in Moscow. When my parents opened this place back in December 2002, banyas in New York were considered unsanitary and not up to par with what we had back home. They wanted to create a banya that was as modern and yet authentic as possible, and that’s what they did. Even now, 80 percent of our clientele is Russian.”

Israil describes the banya as “an extreme spa,” and indeed, to the uninitiated, the bathing rituals can appear a bit like a subtle form of torture, so perhaps they require some instruction.

When entering the banya, you will see the doors to the Turkish steamroom and three saunas (two Russian, one Finnish), a cold water pool, a regular swimming pool, and a hot tub, with white patio tables and chairs peppered in between.

Your first step is to brave the sauna, which is a little wooden room with three bench levels, heated by a coal oven at a blistering 160+ degrees. You will leave your Iphone and jewelry in the locker room, and sit on a towel on the highest bench, making sure to wear either a ridiculous hat or wrap another towel around your head like a makeshift turban.

This is either to protect you from heatstroke or to protect your hair from being damaged by the heat. You will sit there, sweating and possibly heaving, for a long time, as long as you can bear, long past the point of comfort, but not more than 15 minutes.

You will then run out and jump into the freezing 40 degree plunge pool. You will emerge feeling like a newborn baby: sleepy, soft, and ready to forgive all of life’s grievances.

Now you have a well-deserved rest. Wrap a towel around your body (or, for $5, rent a snow-white robe, or, for $0, bring your own) and flop into a chair with a satisfied sigh. The conjoined restaurant serves a variety of delicious, absurdly inexpensive Russian treats.

A Londoner’s starter guide to the Russian banya

Want to understand Russians? "Watch the film 'Irony of Fate'"

Time to get your tazik – cold-water week in Moscow

The Sandunovsky Baths – from Pushkin to the present

The best, and most traditional option, would be a plate of herring with onion and a full portion of potatoes fried in garlic and dill. Pair this with a $4 mug of beer the circumference of your head and hypnotically watch the bubbles rise to the surface as you sip and sample and relish breathing in and out.

You will also want watermelon like you’ve never wanted watermelon before, so be sure to order the exotic fruit plate, or bring your own! The banya is a Bring Your Own Everything experience, so feel free to smuggle in your own six-pack or spherical melon.

Now you are ready for the prime event. Into the sauna again you go, onto the highest bench, but now armed with a friend and a venik- basically a loofah composed of birch tree leaves that are wrapped together and soaked in water (you can rent one for $5, or, for $0, bring your own).

There’s a process by which you beat one another with it, so that it exfoliates the skin and eases blood circulation, but only elderly wise men seem to know how to do it properly, and if you flap the venik around uselessly, one will usually take over and show you how it’s done.

The air will congeal around you oppressively, you’ll feel the blood rushing to your skin, the branches will thrash gently, and it will be hotter than you could have possibly imagined. Then you will run out and jump into the plunge pool again, the shift from one extreme to another shocking your senses.

You will emerge feeling like a demigod, steam rising from your skin, blood pounding through your veins, more alive than ever before. And if you choose to step outside into the outdoor rest area, you’ll find that no matter how cold it is, it will feel like spring. Because you’re now basically a superhero who is impervious to the elements.

Traditionally, when a Russian comes out of a shower, even an ordinary one, he or she will be greeted with cries of “S leykim parom!” which translates literally into “With light steam!” but colloquially into “Enjoy your bath.”

It makes little to no sense until it’s considered in the context of the banya, where bathing is not just a hygienic activity but a spiritual ritual, a philosophical rite that mandates short-term pain for long-term pleasure, that creates a battle with one’s own physical limits, that warrants congratulations for overcoming.

So, go on, take the plunge, and enjoy your bath.