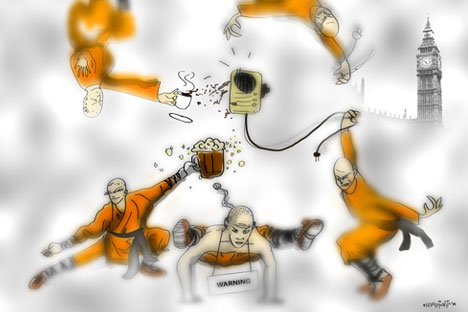 Many expressions and collocations refer to places abroad and have their origins in food, history and culture.

Like any other language, Russian is full of set expressions and collocations based on place names or adjectives derived from them. Some of these expressions easily translate into English, e.g. Russian roulette; others do not, e.g. "Swedish table" (shvedsky stol, шведский стол), which means a smorgasbord, or buffet.

The adjective Swedish is used in two other set expressions in Russian, which do not quite translate into English: wall bars are called a "Swedish wall" (shvedskaya stenka, шведская стенка) and "Swedish family" (shvedskaya semya, шведская семья) refers to an open relationship.

Another expression that will probably baffle a foreigner but is known to practically everybody who grew up in the Soviet Union is "Armenian radio" (armyanskoye radio, армянское радио), which was a fixture of numerous, often political, jokes in which (for some reason) the Armenian radio received a naïve question from the audience and came up with an invariably paradoxical answer.

The adjective Chinese is used in Russian in the expressions "Chinese puzzle" (kitaiskaya golovolomka, китайская головоломка), meaning a conundrum or something dizzyingly complex, and "the last Chinese warning" (posledneye kitaiskoye preduprezhdenie, Последнее китайское предупреждение), meaning numerous but empty threats. While the adjective ‘Spanish’ comes up primarily in the collocation "Spanish boot" (ispansky sapog, испанский сапог), the name of a medieval torture instrument.

Some geography-inspired set expressions derive from literature or arts. For example, the expression "secrets of the Madrid court" (taini Madridskogo dvora, тайны Мадридского двора), meaning intrigue and scheming in the high echelons of power, goes back to the title of a popular historical novel by a 19th century German writer, George Fullborn.

The adjective ‘Swiss’ in Russian is usually associated with accuracy (thanks to the watch), while punctuality and precision are usually described as German.

There are many geographic adjectives in names of various foods, e.g. Korean carrot salad, French bread (which in the 1940s, at the height of the Stalin-era campaign against cosmopolitanism, was renamed "Сity bread"), Dutch cheese, or Krakow sausage. As well as in the names of drinks like Riga balsam or Warsaw coffee (coffee with baked milk). The names of many desserts for some reason came from the old Socialist bloc: Berlin biscuits, Prague cake, Tula gingerbread, or Leningrad ice cream.

Some Russian geographical names have acquired additional meanings and connotations. For instance, the desks at the back of a classroom are often described as “Kamchatka”. While Kolyma, an unofficial name for the Magadan Region, which used to be primarily known for its labor camps, has become part of a popular meme thanks to cult 1960s Soviet comedy "The Diamond Arm". In it, the main character, who is afraid of being convicted of a crime he did not commit, makes a casual acquaintance at a restaurant and his new companion, on leaving, tells him: "Next time you are in Kolyma, be sure to look me up." On hearing this, the main character chokes on his drink and replies: "I'd rather you come over instead."

The city of Tambov, located in the heart of central Russia, has for some reason become a symbol of everything provincial. While the southern port of Odessa (now part of Ukraine) has become associated with its own inimitable brand of humor.

Generally speaking, North in Russia is associated with hard labour, while South is where people go on holiday. West is a symbol of civilization and progress, while East brings to mind conservative traditions and a certain mysteriousness. A famous quote from another film classic, the 1960s Soviet western "White Sun of the Desert" - "The East is a delicate matter" (Vostok – delo tonkoje, Восток – дело тонкое) - has too now become a meme.