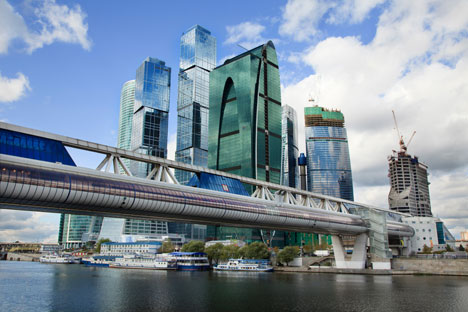 The Moscow City commercial district in central Moscow is home to the Federation Tower. Topping out at 1,112 feet, it is the highest tower in Europe. Source: Lori / Legion Media

The interest of Muscovites in all things American can be found in sites all around the city, from the neo-Classical U.S. ambassador’s residence to a Cold War bunker.

It’s easy for tourists to be overwhelmed by Moscow’s size. From the 16-lane Garden Ring that contains the city center to the Seven Sisters Stalin-era skyscrapers that dominate the skyline, Moscow puts the big in big city.

It wasn’t always that way. Until the Soviet leaders moved the Russian capital back to Moscow from St. Petersburg, the city more closely resembled its nickname — the big village.

Today, Moscow is the only Russian city with modern skyscrapers, and the city’s architecture owes a lot to New York City. The design of the Seven Sisters was heavily based on the Manhattan Municipal Building and the development of the Moscow City commercial district was clearly influenced by the southern tip of Manhattan. Russia’s Federation Tower, Europe’s tallest skyscraper, boasts a tall spire, just like the Freedom Tower in New York.

But the first place to go for visitors interested in seeing a piece of America in Moscow isn’t a tower, but instead a two-storey neo-Classical mansion. Spaso House (No. 10 Spasopeskovskaya Square, Metro Smolenskaya), has been the home of the U.S. ambassador to Russia since 1933.

Spaso House has been the residence of American ambassadors to Russia for 81 years. Source: Press Photo

The house is located off a small square among the rabbit warren of alleyways that separate the Old and New Arbat shopping streets, near the charming 18th century Church of the Savior on the Sands.

In 1934, less than a year after moving in, the first American ambassador to the Soviet Union, William Bullit, held a notorious Christmas party during which three seals he had borrowed from the Moscow Zoo went on a rampage throughout the building. This party was likely the inspiration for Satan’s ball in Mikhail Bulgakov’s novel “The Master and Margarita.”

During the height of the Cold War, the ambassadorial staff would regularly find listening devices in the fireplace and the walls and had to resort to tapping spoons during conversations.

Spaso House has hosted visiting dignitaries such as Presidents Richard Nixon and Ronald Reagan — who met with Soviet dissidents there — as well as many musicians and writers.

Unfortunately the house is not open to tourists, but anyone taking a stroll down the Arbat can take a quick detour by the outside.

While Americans have never immigrated to Moscow in large enough numbers to shape its culture and architecture, Russia and America have a shared history that is imprinted on the city.

For history buffs or those who grew up with the very real threat of nuclear war, Bunker 42 (5th Kotelnichesky pereulok, 11, Metro Taganskaya) is a must-visit location.

In Bunker 42, visitors can take a trip back to the darkest days of the Cold War. Source: ITAR-TASS

More than 7,500 square feet in size, it is located 200 feet underground in a central Moscow district and aims to offer the full experience of a Cold War command bunker from the Russian perspective.

As the museum’s director, Igor Lavrenchuk, explained, “This was where all the decisions were taken during the Cuban Missile Crisis, and we have carefully reconstructed all the board rooms and conference halls to give a proper flavor of the atmosphere in those days.”

The more adventurous tourist can choose between Bunker Quest, a 90-minute game where you have to recapture the bunker from terrorists, and the more surreal Zombie Apocalypse, where the bunker is infested with, unsurprisingly, zombies. Fans of 24 and George Romero apply within.

Russia is rightly very proud of its cultural history, and if you wander through Moscow’s various boulevards you will find many statues commemorating the country’s poets, musicians and artists, as well as plaques detailing where they lived.

The monument to the poet Walt Whitman. Source: Press Photo

It was installed in 2009 as part of Hilary Clinton’s visit to the country on the famous “reset” tour, and its inscription quotes Whitman himself: “You Russians, and we, Americans! ... so far apart from each other, so seemingly different, and yet ... in ways that are most important, our countries are so alike.”

The Moscow State University complex is very large, so it is a good idea to take a map to find the humanities building.

Jewish Americans or those interested in Jewish history should visit the Jewish Museum and Tolerence Center (Obraztsova street, 11, building 1А, Metro Marina Roscha), which details the experiences of the Jewish diaspora in Russia, as well as global Jewish history.

The museum has a specific focus on interactive learning and makes full use of the latest multimedia techniques. This, along with its dedicated children’s center, make it a good venue for families who are keen to understand more about Jewish culture, past and present, in Russia.

Children of all ages will also be enchanted by Nancy Schon’s Make Way for Ducklings installation (Pond by the Novodevichy convent, Metro Sportivnaya).

The Make Way for Ducklings installation is a copy of the beloved Boston sculpture. Source: Press Photo

Inspired by the children’s book of the same name and originally designed for the Boston Public Garden, the Moscow version was installed in 1991 as a gift from Barbara Bush to Raisa Gorbacheva.

Gorbacheva is buried in the convent cemetery, which is the resting place of numerous Russian cultural and political figures. Schon was keen to point out that she is “not a political artist,” and her comment is an important reminder to visitors that the ability to enjoy Moscow does not depend on your nationality or political views.

Read more: America through the eyes of a Russian>>>